Post card showing the ice chute heading downhill to the docks. To the left is the quarrying operation.

First a creaking. Then a sudden crescendo of metal-on-metal screeches, wood timber groans, and grinding brakes filled the air as tons of ice loaded on custom rail cars sped downhill on a chute to a Hudson River dock. The ice train, built in 1860 to haul tons of ice up from Rockland Lake, over the mountain, and then downhill to the river, was a monument to engineering ingenuity spurring an important local industry. The feat was so remarkable that the Edison moving picture company made one of the first-ever outdoor movie shoots of the process in 1898.

It’s easy to lose sight of how much our ancestors depended on farmed ice to keep foods cool. As the US population grew in the 19th century, so did the need for ice. A local company, the Knickerbocker Ice Company, became a major ice distributor due to the purity of Rockland Lake water and the nearness of the largest metro market in America. The company created 1,200 full-time jobs and up to 4,000 part-time jobs around Rockland Lake and the greater Nyack area.

Logo for the Knickerbocker Ice Company.

Early farmers stored ice from local ponds for home use. Ice was usually hacked out of a pond by an axe and carried in a basket. Growing urban markets created demand that was not easily filled by baskets of ice. The first innovation in Massachusetts was a specialized hand saw for cutting blocks laid out on a grid. By 1827, Nathaniel Wyeth of Massachusetts patented a horse-drawn ice cutter with a standard-sized, three-dimensional block that facilitated storage and transportation.

The earliest ice farming at Rockland Lake, then called the “Pond,” and previously Quaspeck by Native Americans, was done in 1826. C. Wortendyke of NJ found a way to get two boat loads to city markets. In 1835, local men cut a sloop of ice from the lake and Barmore, Felter, and Co. was formed. They built an underground storage facility near the lake and an ice house at Slaughter’s landing located on the Hudson River below Rockland Lake where the Nyack Beach State Park walking path now ends. The company built another ice house in New York City. Rockland Lake ice was an immediate hit in the city and became known for its purity. The newly opened Astor House was one of the first big customers. Up to this time, much of the ice sold in the city came from ponds and rivers polluted by sewage and other contaminants, so it’s no wonder our mountain spring-fed lake became so popular.

The infighting over who had rights to Rockland Lake ice and who controlled barge traffic was fraught. Out of it, the Knickerbocker Ice Company was formed in 1855 with enough capital to develop the large-scale ice farming of Rockland Lake that became world known. Large ice sheds holding thousands of tons of ice and the unique rail system to take ice to the river were built. 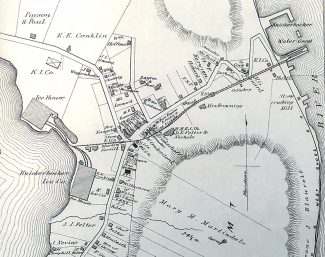 1876 map of the railway leading from the lake on the left, through the village and gap between the hills to the dock on the Hudson River.

Early efforts to take ice from the lake to the river consisted of carts built with primitive tree trunk rounds as wheels, hauled by horses up to the clove (or gap) between hills surrounding Rockland Lake and down to the river. The carts were loaded onto barges. To speed up the process, a chute was built from the top of the clove to a river dock. The first attempts failed, but in 1860 a new successful railway system was devised from lake to river. 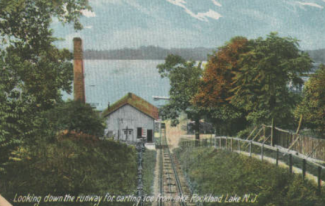 Ice train railway leading up from the lake itself to the village. The powerhouse is on the left.

The ice train opening was celebrated with toasts of iced champagne at a reception on September 25. The railway consisted of four parts: a flat section from lakeside ice houses to the bottom of a hill, a motor-driven uphill ramp from the lake to the clove, a flat section through the town of Rockland Lake, and then a downhill ramp to the river.

In the first section, horses pulled ice-filled cars on railway tracks leading from the two ice houses to an engine house, some 700 feet. In the next section, the engine house powered a wire on a drum that pulled the cars uphill to the village to a point where Rockland Lake Road and Landing Road meet today. Horses took over again, towing the cars on level land through the village and behind the Knickerbocker Fire Engine Company Number One firehouse that still stands today. 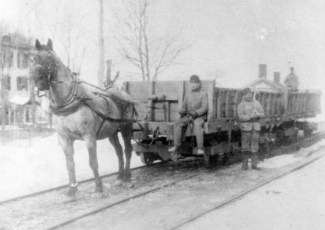 The final section began at the lip of steep decline to the river roughly parallel to a paved road that exists today. Here, a gravity railroad took over. Two sets of tracks led steeply downhill some 1,000 feet in length covering 270 vertical feet.  Two loaded cars, each weighing five tons, were sent downhill at the same time, and as the loaded cars headed downhill they pulled up empty cars on the second track. The speed was controlled by a braking mechanism and the counterpull of the other track. Slowing at the bottom to a near standstill after a one-minute journey, horses took over again, pulling the cars along any of several tracks leading to barges. The cars were unloaded and the process repeated.

You can see some of the process in real time in a crude Edison movie. The first half of the three-minute film shows ice being loaded onto a lakeside car. One worker at the center removes ice shaved from the top of each block so each block is the same height. At 1:27 in the film the final ice ramp is shown from the top. Two sleds head down the railroad in real time to the barges lining the docks. 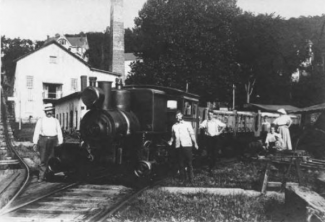 Around 1885, a railroad spur was built connecting the New York West Shore and Buffalo Railway in Congers to Rockland Lake for the transportation of ice. All traces of the spur have disappeared, but it is possible that the tracks ran along a similar path as the existing tracks from Lake Road to the north side of the lake. This path helped expand the reach of the Knickerbocker Ice Company beyond New York City, which was more efficiently reached by river barge. 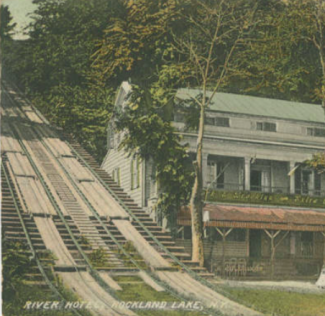 Henry Vorrath’s hotel next to the railway.

The photos of the riverside ice train show a small hotel on the north side near the bottom. Henry Vorrath’s River Hotel was built before the ice chute. The ice chute was built right next to the three-story hotel catered to people working in the local ice industry as well as the nearby quarry industry that ran in the summer months. Imagine requesting the room beside where the ice chute ran. Guests said it sounded as loud as a freight train. Exciting!

Goodbye to the Knickerbocker Ice Company

Rockland Lake ice could never hope to keep up with demand. Warm winters sometimes produced low ice yields, hot summers melted inventory. Demand outpaced supply. In the early 20th century, breweries started producing ice for lager production. Soon, artificial refrigeration took over. The Rockland Lake ice houses were closed by 1924. In 1926, workers tearing them down inadvertently started a fire that destroyed both of the large houses. The hotel, the railroad, and most of the town have also disappeared.

Only a determined forensic geologist can spot the narrow channels of the railroad crossing the level section near the clove and the lost town of Rockland Lake. The quarry and docks also disappeared, becoming a part of the Palisades Interstate Park system. For a time, a large amusement park was located near where the railroad ended. That too disappeared in a 1950 storm.

While ice farming is gone, we are blessed that Rockland Lake is now parkland, open to all. One can imagine, sans the park system, an entrepreneurial farm-to-table revival of organic, natural Rockland Lake ice in signature evening libations throughout Nyack restaurants.

How to find the ice train railway today 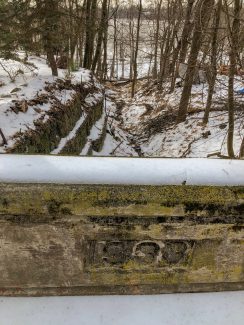 Looking west down the railway toward Rockland Lake

The old railbed is best discovered in the winter when there is no obscuring foliage. Begin at the intersection of Rockland Lake Road and Landing Road. To get there you will need to travel to the nearby trailhead on Landing Road and walk.

At the intersection, notice two concrete bridge abutments dated 1933. The ice train went under the road at this point. Go to the west bridge abutment (towards the lake) and a manmade gulley heading straight down to the lake can be easily seen. This is the section where ice-laden cars were hauled up by a mechanical winch.

On the other side of the bridge, looking west or toward the river beyond the abutment, the railbed appears as a small notch in the ground and can be seen curving along a cliffside behind a residence and the Knickerbocker fire house. Ice cars were pulled along this flat section by horses along the rail line. Much of the rest of this flat section beyond the firehouse is obscured.

The terminus of the flat part of the railway and the beginning of the downhill ice chute may be found just east of the Long Path trailhead that is marked with blue blazes. A park sign is posted here describing the Knickerbocker Ice Company. Just east of the sign, parallel, and not far from the paved road that heads downhill, are two slightly-decayed parallel stone walls. The walls once supported the railway. At the end of this ramp that projects some 10 feet above grade, ice-laden cars were attached to a cable system. The projection out over the grade increased the initial momentum of the gravity-driven downhill railway. At the end of the stone walls, the beginning of the downhill ramp is visible as a slanting pile of rocks that supported a timber railbed.

The riverside docks that were the terminus of the ice train no longer exist, having been destroyed in the Thanksgiving storm of 1950. Walking down the paved road from the top of the ramp to the shoreline, or walking from Nyack Beach 1-1/4 miles, the location of the docks can be determined by finding the remains of Rockland Lake light. Look for a pile of rocks mounted by a metal structure just off shore. The light was just off the end of the docks.

Photos: Courtesy of the Nyack Library

Nyack People & Places, a weekly series that features photos and profiles of citizens and scenes near Nyack, NY, is brought to you by Sun River Health, and Weld Realty