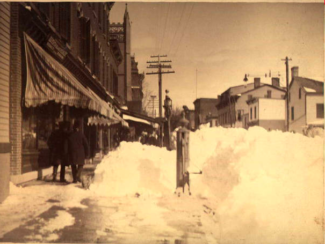 Blizzard of 1888 view on S. Broadway looking north to Main St. The old Christie village pump has been shoveled out.

During the Great Blizzard of 1988 when only one milkman was able to make a few of his deliveries, 879 cans of condensed milk were sold in a village with a population of 4,000. As the Rockland County Journal wrote at the time, “there can no longer be any doubt that curious climate changes are likely to occur at any time.” We might say the same thing today as the Great Blizzard of 1888 is only the fourth largest recorded snowfall in the region, the largest falling in 2001. Amazingly, out of the top 5 all-time snowstorms, 4 have occurred in the first 20 years of this century.

As difficult as the recent storm has been, and as difficult as the other 21st century storms were, imagine if you had absolutely no warning that a storm was coming, no iPhone to update you, and spring was only a week away. Now couple all of that with several feet of wind-blown snow and no mechanical means to remove it from roads and sidewalks. No wonder the East Coast considered this the most memorable snowstorm of all time and its date was celebrated every year on its anniversary.

The Great Blizzard of 1888 Hit the Entire East Coast

The Blizzard of 1888, or the White Hurricane as it was sometimes known, paralyzed the East Coast from the Chesapeake Bay to Maine with snowfalls ranging from 10 to 58 inches that began on March 12, 1888. Winds were astounding, the highest recorded was 80 mph, drifts reached 40-50 feet in places. Gravesend in Brooklyn recorded a drift of 52 feet! Temperatures averaged 6 degrees. There was the coldest ever March day. Some 400 people lost their lives during the storm (none in Nyack). Boats and trains were shut down. Fire trucks could not reach fires.

What the Blizzard Was Like in New York City 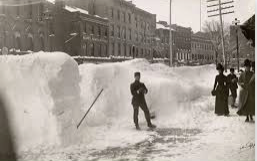 Shoveling out after the Blizzard of 1888 in New York City.

Arthur Langer, in a remembrance published in 1947, 59 years after the blizzard (and republished in South of the Mountains), recalls being a young man who went to work that day downtown at the Tribune Building, commuting from his Upper East Side apartment despite all the snow that had already fallen. It was still snowing hard, and the winds were ferocious. Langer took the 3rd Avenue “L” whose “dinky locomotive” stalled in the snow on the hill heading up to the 66th St. station. A trailing train that skipped the 77th St. station to make it up the hill with more momentum smashed into the snow-shrouded, stalled train. One person was killed. Langer was standing at the time and fell to the floor but was not injured.

He continued on the 2nd Ave. “L” to his office. Going home, he had to walk narrow pathways cleared of snow. He stopped at “L” stations that had stoves to get warm. Along the way he saw a stalled streetcar completely buried except for its stove pipe. 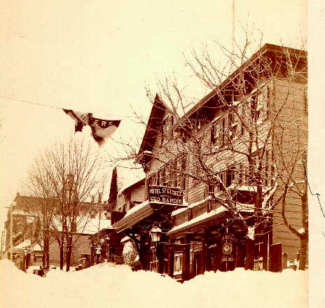 On Saturday, March 10, temperatures were in the mid-50s.  On Sunday night it began to rain and then changed to snow overnight. Several inches of snow were on the ground by Sunday morning, more depth than any other time during this warmer than normal winter. Commuters headed off to NYC by train, children went to school, and businesses opened their door as usual on Monday morning. No one had any inkling of what was about to happen.

By noon, blowing snow made travel difficult. Businesses began to close, and school children were sent home from Liberty Street School early. Some places were free of snow that accumulated in drifts ranging from 5 to 25 feet. Communications with the outside were cut off. Trains stopped moving on the Northern Line. Mail that came by rail was not delivered. The telegraph went out on Monday and didn’t come back online until later Tuesday. Nyack was essentially cut off from the outside world, radio not having been invented yet. Parts of Nyack had been electrified. The main avenues had streetlights. It is not reported what happened to these power lines. Heat was by coal or wood. 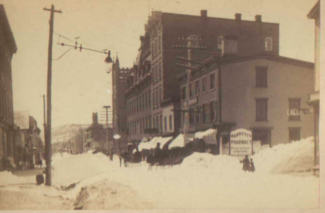 Blizzard of 1888 view from N. Broadway looking south. A pharmacy was then on the southwest corner of Main and Broadway. The drifts are as high as the people.

Snow shoveling started as soon as possible. Merchants and workers shoveled lanes in front of their stores so people could get into the stores. Some stores were snow free, and in other case snow covered the store front. A ladder was used by a barber on Main Street to look into his shop. Often people could not see over the snow in the roadway to the other side of the street. Along Broadway, it took the janitor of the Reformed Church at Church Street most of the day to dig a tunnel into to the church While standing on the west side, buildings like the National Bank on the east side could not be seen. At the corner of Main and Franklin, passageways were dug at right angles to navigate the intersection.

Horse travel was impossible for the most part although a few got out their sleighs, mostly put away for the winter, and took a joy ride. Often, they ended up getting pitched into a deep snowbank since the way was by no means level. 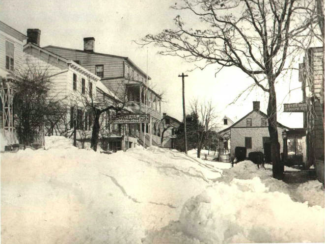 Piermont Ave. looking north to Main Street. Maloney’s Ave Vault selling India Pale Ale doesn’t look open yet. The three-story building on the corner with Main is a hotel. The Smith/Lydecker house at the end of the street is likely one of the oldest houses in Nyack at the time. The house was demolished.

Communication with the outside world finally started to open on Wednesday. A train agent made it to the West Shore Railway in West Nyack some 2 miles away. 2 train engines had pushed through on the Northern Line into Nyack from Sparkill late Tuesday night. It was a short but difficult journey. They encountered drifts that reached to the top of the engine cabs.

On Wednesday night, trains started arriving from Jersey City bringing home those who had been stranded on Monday. Some slept in the Erie Station in Jersey City or in the waiting cars. Those with friends in the city stayed with them or at hotels. Prices went up for hotel rooms. Someone reported that an outrageous 25 cents were charged for a hard-boiled egg.

On Monday, Hannah Hoffman realized that her Wednesday wedding to Herman Levy of Tarrytown that was schedule for the Nyack Opera House would not be possible. It was postponed for a week until the day before spring. On a rainy March 20, the 2 were married. In 1938, the Journal News reported their 50th wedding celebration. 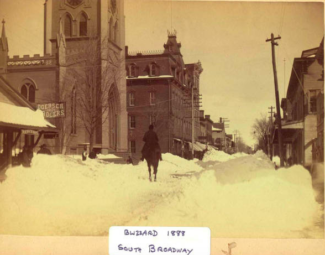 Streets are somewhat clear for the horse and rider on Broadway heading north to Main St.

The situation in other villages in Rockland County was similar to Nyack. In Nanuet, roads were broken open starting on Wednesday. Wind had pushed the fire station windows open and others found snow in their cellars driven by the wind through cracks in the foundation. In Spring Valley, “Spence” Youmans was arrested for refusing to clear snow from the public roadway by Roadmaster Concklin.

In some places the snow remained until June. The Great Blizzard of 1888 may not hold the record for the area’s deepest snowfall, but it was such a memorable event that it registered with people for their entire lives and was noted every year in newspapers and as recently as 2017 by Robert Brum in the Journal News. Brum reported that it took weeks to clear away the snow since the only snow clearing equipment was a horse-drawn plow. It was more than a snow day; it turned out to be a snow week.

Photos courtesy of the Nyack Library. The blizzard photographers mentioned in newspaper articles were by Mr. Insley and Harry Sampson, perhaps these photos are some of their work.