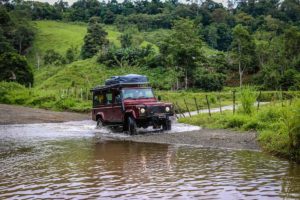 I’ve been meaning to write a column about Rachmaninoff. About driving around Costa Rica and listening to Rachmaninoff, which I’ve been doing a lot lately, more than most of you. The Second Piano Concerto in particular. If you don’t know Rach 2, immediately drop everything and run as if your life depended on it to the highest quality sound source available and listen to it. All of it. Preferably the Rubinstein/Reiner/Chicago Symphony version. It’s about 35 minutes long. Then you can die happy. If not you will be condemned to an eternity in hell hearing only the sounds of police sirens ever passing but never arriving.

I’ve been doing a lot of driving. But why Rachmaninoff? It’s a fair question.

Firstly, they speak Spanish here. No one told them that English is the official world language, so everyone here speaks Spanish, and they speak it really well. So the radio is of limited use. I really want to learn Spanish, and I’m working heroically at it. I try to listen to the radio as much as I can, just to hear the rhythms of Spanish, but after a while you’ve got do something a little less demanding on the ears and mind. Which is where Rachmaninoff comes in. He’s like ear candy.

So why Rachmaninoff? Well, it has to do with my mother, from whom I inherited a love for classical music, and also with my technical ineptitude. It’s not so much that I couldn’t figure it out as that I didn’t give a shit until it was too late. Cell reception is pretty bad outside the cities in Costa Rica so it’s hard to stream, and when I stop at night I forget to download stuff over Wi-Fi. What can I tell you? I’m an old man. And I’d had the Rachmaninoff on my phone for years, for some reason, though I’d never listened to it. It was like one of those records back in the day that you kept way high on a shelf and never listened to. And now it was the only one you had.

Costa Rica never met a hill it didn’t like. Nor a valley or canyon or ravine. It’s a landscape so overstuffed with features it appears to have taken in the strays. Nicaragua’s got an extra lake? Send it over. Panama is burdened with a spare volcano? Not any more. The country’s geography traces the footprints of 100 drunken deer at a Christmas party. Tiny, steep, oddly shaped valleys, then verdant plains, then a waterfall plunging 200 feet from a rock face jutting out of a dizzyingly steep slope, the only mountain on earth comprised entirely of a thick network of vines. It is a country dense with natural beauty. And not just any beauty. An intense, lush, screamingly green and wildly alive beauty, a kind of beauty that makes you feel like a better person just for being next to it. Just for bearing witness.

I feel the same way about the Rachmaninoff. Why did I download it in the first place? Well, it’s long. Longish. About 35 minutes, which is quite a bit longer than your average pop song. And it has no words. Sometimes it is nice for there to be no words. And it’s real people making real music. I have a soft spot in my heart for people who make music by blowing through tubes or rubbing hair over metal or hitting things with hands or sticks. An orchestra is a magical invention to me. And Rach 2 seems to use every instrument to explore every color of the orchestra.

I had never listened to Rach 2 before I came to Costa Rica. It revealed itself to me like a shy lover as I drove, first little hints of rosy flesh, then light little giggling runs in the piano, and all of a sudden all the clothes come off and you dive under the sheets with the most sublime, unabashedly romantic music you could ever hope to imagine. I didn’t realize this, but Rachmaninoff is ranked, according to one website I visited, as the #1, very best pianist ever to take up the instrument. We all know these rankings are untrustworthy, just one man’s opinion, but it gives you an idea of the level of virtuosity involved. Rach 2 is what pianists call it, and it is known among pianists as a pinnacle piece in the repertoire, and there are some passages that literally take your breath away, so stunned are you wondering how a human could actually accomplish such lightning fast and divinely filigreed playing, to say nothing of writing it in the first place. Yet none of it ever seemed forced or showy. Or, of course, it’s showy, but showy in the best sense, a showiness of shared excitement rather than preening self-regard. The movements all grow in strange, surprising, organic ways, gorgeous melodies growing suddenly one from another like bromeliads, those extraordinary plants that grow not from soil but from the limbs of trees, wrapping themselves around and through and above the melodies that seeded them and gave them birth. What is remarkable about Rachmaninoff, perhaps not so unique to him but unique in how completely his second piano concerto accomplishes this goal, is that he is searching, single-mindedly and unabashedly, for beauty. He just wants to make something so beautiful that your jaw drops and your pulse quickens and your mind is full and empty at the same time, like some hypnotic guided meditation. And he succeeds. Amazing!

The same is true of Costa Rica. They’re wed in my mind, somehow, the swelling chords and divinely playful and unpredictable melodies of Rachmaninoff and the twisting, turning roads and ever surprising vistas around every corner in Costa Rica. Coming over the ridge in Manuel Antonio and seeing the beach obscurely beneath you, the endless sea beyond. The perfectly formed, blazingly colored orchid you stumble across during a morning walk through the jungle or by the roadside. The monumental presence of the Arenal volcano, visible for miles around but often obscured in a haze of clouds. I heard those clouds in the beginning of the slow, soaring, achingly beautiful second movement. And the startling and endless variety of every sort of flora and fauna imaginable, leaves of every stripe and width and hue, built for blazing sunlight or deepest shade or something in between, overstory, understory, mid-story, they all tell a story of a jungle, a country, a music bursting with the unabashed joy of beauty. It’s rare that the 2 come together so perfectly, so organically to create such a symphony of both sound and vision. And it is my own profound joy just to drive and listen and bear witness.