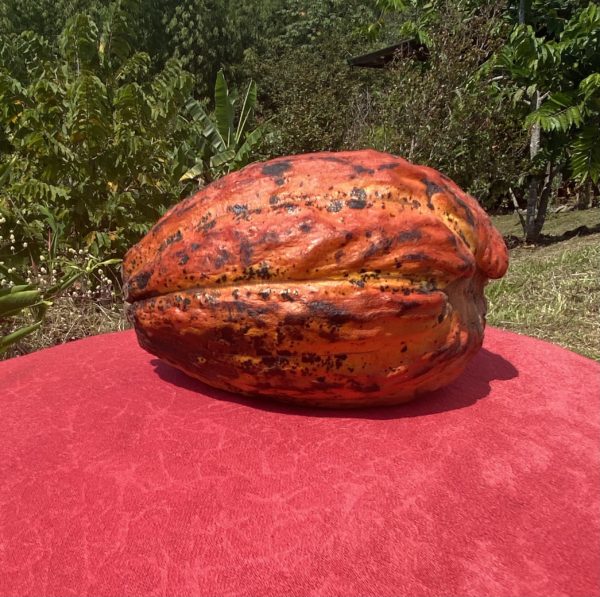 Many of the most important plants in the history of human civilization were developed a stone’s throw away from where I sit right now in Perez Zeledon, Costa Rica. Coffee. Cacao. Vanilla. I was told a curious fact about vanilla by Eric Rivkin, an old Jewish guy from Syracuse who moved down here ages ago to start a farm, which he calls Joya del Sol, or Jewel of the Sun. He hosts internships and workshops and residencies and lunches, and also cultivates an outstanding vanilla bean.

Now here’s the curious fact. Vanilla, Mr. Rivkin informed me, in his mild, Hebraic, take-it-or-leave-it voice, is the only plant on earth that must be entirely processed by hand. There are no machines to harvest or soak or dry or peel the vanilla bean. All must be done by hand, and carefully. It can’t get too dry, nor too wet, nor too hot, nor too cold. It must be tended to for 6 weeks in this intimate fashion before it yields up its nectar. I thought for a minute. “I see vanilla in every store, every market, every mall. If it takes so much dedicated personal attention,” I asked, “how is vanilla so all over the place?”

We then moved on to cacao.

Of the native medicines used for healing in these parts, cacao is certainly the mildest. It’s known as a helper medicine, like marijuana, but with a far more subtle, pleasant, vivifying effect. These are in contrast to the teacher medicines that are also available in these parts, the ayahuasca and the peyote, called teacher medicines because they tell you things about yourself and more strongly impose themselves on you. Cacao has an effect, sure, but it is far more subtle, and depends on you to amplify and appreciate it. Which is why I participated in a cacao ceremony the other day. I wanted to see what would happen. But mostly I just love chocolate. It’s a gift from my mother. She used to have a shirt that read “Cacao comes from a tree. Trees have leaves. Chocolate is salad.” So it was comforting for me to find that, yes, there were people who believed that while cacao may not precisely be salad, it is a sacred source of both physical and spiritual nourishment.

I did my cacao ceremony at Finca de Vida in Costa Rica. There were about 10 of us ranged on mats around a central cacao altar. We picked up regular coffee mugs that had been filled with 45 grams of raw, stone ground chocolate, broken up into bits. We poured hot water over them and stirred and stirred, making a hot cocoa out of the mixture. Raw chocolate in its undiluted state is rather bitter, so a small amount of tapadulce, a dense brown sort of cane honey, was added for taste. And it tasted pretty good. My mother would have loved it.

Our facilitator, Jody, began with a short talk on the history and mysteries of the bean. The cacao plant is among the longest plants in active cultivation, evidence extends back 7,000 years attesting to its power and longevity. When Cortez came to Montezuma and asked him where all the money was (as Conquistadores are sadly wont to do), Montezuma led him to a vault filled with cacao beans. That was their money. Cortez wanted more. But he shouldn’t have. Because cacao is awesome. Cacao is the most chemically complex plant known to man. It has antioxidants we have yet to identify. Yet cacao is mild enough you can do it every day, like coffee, and you’ll be pleasantly energized but not anxious, not nervous. Cacao makes coffee look desperate and sad.

So first you make your mixture and drink it. Then Jody gives this little talk. And then you lay on these mats and close your eyes while musicians play—first pan flute, then didgeridoo, which, moving around the room and closing in on your ear, can sound like a nest of hornets about to descend on you. Then another leader comes by with a handheld drum he holds over your heart that when hit with a mallet unleashes a low, thrumming set of vibrations that seem to burrow right through you, in a pleasant, energizing way. All the while a woman with a sage stick and a ceremonial feather wanders to each participant giving them a sage bath. Clearing their chakras.

The last part of the ceremony is the “ecstatic dance.” By this time the cacao is working in you, you’re part of a group. You’re not high, in any traditional sense, but you do have an energy that is something extra, and you are willing to venture into embodying this feeling further. Jody bases the dances on the chakras, moving from the root chakra through the sacral chakra, to the solar plexus, heart, throat, third eye, all the way up to the crown chakra, the one that is pure spirit. This all takes about 45 minutes, all the time dancing. It sounds like a long time but it’s not. She uses the chakras to embody things that you want to change or get rid of or transform. It’s not a dance so much as an expiation. No one looks stupid. No one worries about that. For one thing, I had my eyes closed most of the time, and when I opened them, most everyone else’s were closed. And secondly, the dance allows you to purge. There is a lot of throwing out of arms and vigorous shaking of hands. The music has a heavy, four on the floor beat, some bluesy, some folksy, but all with repeatable phrases like “I believe!” and “I can!” and “Thank you!” and “Gratitude!” which you start mumbling and end by shouting ecstatically, uncaringly to the sky.

It will seem silly only to the resistant. If you buy into the experience you will feel transformed. I felt really good afterwards. Not the hugging everyone around you, look at all the colors of the sun good. Just a quiet, confident, slightly buzzy and smiley and friendly good. So I would recommend it. If you can’t make it down to Costa Rica, google “cacao ceremony in your area.” And if you can’t manage that… just go out and get yourself some really good chocolate. Because you’re worth it.

I am going to be taking a break from this column for a few months to work on other projects. It’s been a great experience writing for you, and I hope you’ve enjoyed reading my work. If so, please reply to me at dancohen320@gmail.com. Many thanks for the time you’ve spent with me, and I’ll see you around the next bend in my pandemic odyssey.