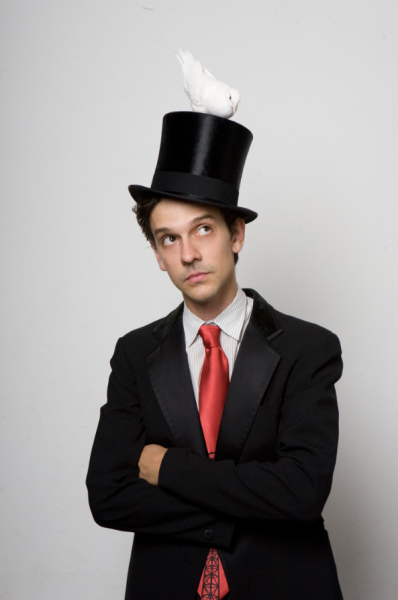 Pre-pandemic, Nyack-based Mario the Maker Magician and his family spent much of their time on the road, touring theaters across the country with his family show and a message to “do what you love, use what you have, and have fun.” As with so many industries, theirs took an enormous hit in March of 2020. In the face of a calendar wiped clean of tour dates, Mario turned toward new projects, new mediums, and new ways to connect with the audiences that had long supported them.

Some of those projects are available now… in the form of a newly released magic book for kids, a DIY robotic magic kit, and a new “virtual tour” of family-friendly Zoom shows.

The Maker Magician’s Handbook: A Beginner’s Guide to Making & Magic, by Mario Marchese, published by the folks behind Make: Magazine, is an exploration in crafting an entire magic show out of items easily found in our own homes. Accessibility is the name of the game. This book is an introduction to finding your own story, your own creativity, and your own voice, as a maker and a magician.

Mario is known for his clever integration of robotics and DIY electronics in his magic, and The Chomper Bot Kit, released by Make: Magazine’s Maker Shed, is a perfect way to get started with a simple microcontroller called an Arduino, that powers much of Mario’s own show. Build your own Chomper Bot, code it with Mario’s easy-to-follow video instructions, and then perform a magic trick with it!

Live entertainment will always be a huge part of what Mario does, so it’s only fitting that he would adapt a family show to fit the Zoom screen. After months of livestreams and private Zoom events, Mario’s Virtual Punk Rock Magic Party is a culmination of all he’s developed for the virtual world. There are four show dates in February to choose from: Feb 4, 11, 18, and 25 at 7p EST. The show is interactive, extremely upbeat, and full of Mario’s original magic, music, animations, and even an epic air guitar contest with lots of giveaways. Just $25 per household for an evening full of laughs. David Blaine calls Mario “the best kids magician in the world!!” Come see why.