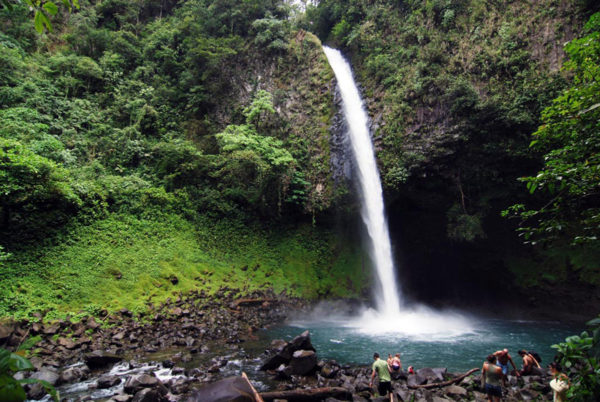 Permaculture is an extension, a more committed version of organic farming. At a permaculture farm, the goal is to use the land in such a way as to be able to recycle everything. Essentially to have no carbon footprint. That is the goal. A rather abstract, pie-in-the-sky goal that I’m not sure anyone is able to fully reach, much less sustain, but the goal provides a framework for farm management. Crops are not cultivated in rows but arranged in groups, the large-leaved banana trees providing shade for the smaller plants below, etc.

I walked through the farm with David, one of the guides giving regular tours. The farm seems to emerge organically from the forest. As we walked the path, David pointed out to me plants that they’d planted along the side or in the forest a bit, plants that seemed part of the forest, that my gringo eyes never would have suspected were part of a crop. And indeed David told me that the rainforest is their model for agriculture, waste management, and general farm maintenance. Land was not cleared to create this farm, no trees were cut down, and crops were cultivated in such a way as to not disturb, but mimic the cycles of the forest around them. Because Costa Rica’s climate is essentially stable all year, temperature-wise, with only a dry season and rainy season to contend with, crops are planted serially, so that there is always something that is blooming or ready to harvest at the farm.

Is the farm self-sustaining? Yes, essentially. It has no need for any fertilizer other than the mulch they create from their own farming processes. Another advantage of Costa Rica is the abundant rainfall, making irrigation unnecessary. Do they create enough food to sustain the hotel? No. At times they have an abundant harvest that not only feeds the hotel but provides overflow that they sell at local markets. But I don’t think the point is to feed the hotel, per se. It is to create as abundant a harvest as possible within the confines of their permaculture goals. It’s not going to be a commercially productive farm. Permculture is not scalable. That’s the point. But they’re not doctrinaire about it. When I was there one of the farm managers was putting in raised beds to cultivate salad greens, mostly lettuces. They go through a lot of lettuce.

There were few guests when I was there, alas. Another sad COVID reality. I stayed 3 nights, and the middle night I was in fact the only guest in the entire hotel. But the farm goes on, the planting goes on, the harvesting goes on. They’re confident the guests will return. And they have a low overhead.

Nearby are the hot springs of Arenal. It is the area I heard most about from Costa Ricans, one of the most popular vacation spots for ticos (as Costa Ricans are known). Some told me that they used to go there, until it got too big and commercial. So I went to La Fortuna, a few miles from Finca Nueva Luna, expecting big hotels and huge billboards.

I got none of that. The largest billboard I saw was for Sloth Park. There is a strip reminiscent of Lake George or certain parts of the Cape–lots of bars and restaurants, mostly empty, again due to COVID, a few ice cream stands and crafts stores for tourists. No Miami Beach.

Outside the town are the hot springs resort, which range from family-style day spas to very fancy hotels with all sorts of spa treatments. I didn’t stay there. I got a day pass to Baldi Hot Springs Resort and Spa, which has all kinds of pools of every size and temperature. Despite its name, however, its pools are not fed by natural hot springs.

I wanted the real hot spring experience, but didn’t want to pay an arm and a leg. Baldi, Tabacon, Kalambu, these are all the fancy places, the pampered places. If you’re after a natural unimpeded experience, you’ve got to go to the yellow post by the bridge. That’s where I was sent by Lonely Planet Guide to Costa Rica. Look up Rio Chollin and you’ll find directions to the yellow post. Drive to the yellow post on the side of the road. I had some doubts I would actually find it so I asked a local. ‘Oh yeah,’ he said. ‘Just go down to the yellow post.’ So I did.

You park by the side of the road. Bring your own towel, of course. Then make your way down a precarious, slippery set of steps to the banks of the Rio Chollin, a hot river stemming from one of the more productive hot springs in the area. There is a wide, placid swimming hole as well as a smaller area behind a wall. The current is less there, it’s the place to hang out, but a couple was making out in that spot so I stayed in the larger pool. No amenities, not much to do, so I took the waters and left after about 15 minutes. But these are the same waters of the fancy, four and a half star Tabacon Thermal Resort and Spa just upriver, above the bridge.

Arenal is host to all kinds of outdoor activities, from horseback riding to hiking to canoeing on Lake Arenal. I was there for the day, so I limited myself to a hike around the base of the Arenal volcano. You can’t go up the volcano without a guide, but the park provides a pleasant loop of 3 miles or so through the rainforest at its base. Full of wildlife and the most amazing ferns and plants you can imagine. The air teemed with the sound of birds and insects, and the ground, covered with fallen leaves, made patterns in the path. I walked up a side path that gave a view of the volcano. Took a picture. A good picture. A fine picture. But still a picture, a snapshot, one that seemed not quite to represent the majesty of the moment. I recorded the sound of the forest on my phone and listened to it when I got back to the hotel. In earphones. It was magic. A sound is worth a thousand pictures. Far more than the photo, the audio of the birdcalls, the bugs, the lizards, conveyed to me again the buzzing life of Arenal. It’s worth a trip. And bring your Voice Memos.