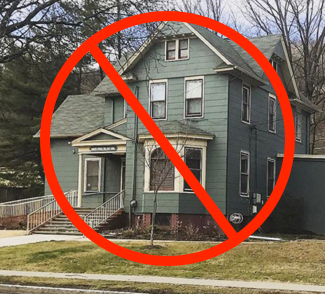 South Nyack, Dec 18 —  Village residents voted 508 to 292 yesterday to dissolve their village government. Six out of ten (64%) voted Yes in the citizen’s  initiated referendum to disband the municipality.

The movement to dissolve South Nyack began when Nyack College was sold to a Ramapo-based Hasidic Yeshiva earlier this year. Residents were immediately concerned that the village didn’t have the resources or tax revenues to pay for any future legal action–fears sparked by the loss of government control nearby East Ramapo has experienced. The poor communication about the sale from South Nyack’s mayor and village board didn’t help matters. Nor did the fact that the sale of the property to a tax-exempt religious institution would squander an opportunity to give the village a necessary financial boost.

Here are the next steps in the municipal dissolution process as stipulated by the NYS Division of Government Services.

Should citizens decide they want to reverse course, the bar is much higher to stop this process. The petition to request a dissolution vote only requires signatures from 10% of registered voters; to stop the process, 25% of the voters must sign on. That’s a tall order given that just short of 65% of voters just said OK to pulling the plug on village government. Here are the steps required to stop what was started yesterday:

Dissolving, in theory, would cede control of the sale proceedings to government, in Orangetown, that’s bigger and more well-equipped to handle it.

Not everyone is convinced though. South Nyack Mayor Bonnie Christian has dismissed the benefits of dissolution, and, in a message to residents, warned that the move has significant costs, such as “the loss of our self-governance, the loss of control over our land, the loss of our excellent services, the loss of our stellar staff, the loss of OUR ABILITY TO DETERMINE OUR OWN SOLUTIONS FOR LOCAL ISSUES.”

While dissolution is no doubt a monumental step for the village, most things are not projected to change for residents, at least according to the CGR consulting firm’s Dissolution Report. The move, as we’ve reported, will not have any impact on the village’s school and library district (the greatest share of taxes), fire protection, emergency medical services, postal delivery, water, sewer, or utilities.

Only village and town taxes will be effected. Which isn’t nothing. CGR projects that a house with an assessment of $200,000 and a market value of about $480,000, there will be approximately $1,440 of annual savings in property taxes. The tax decrease, though, will likely come with a tradeoff in village services.

(Read about the other important takeaways from the CGR Report here.)