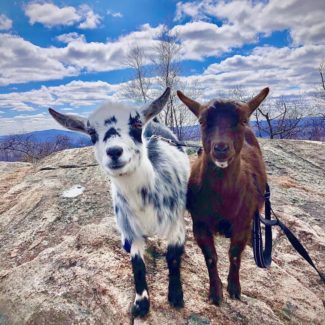 The Summit School goats on the summit. Sawyer is on the left and Scout on the right.

When villagers encounter two Summit School goats being walked in Upper Nyack by Anna Sicari, a Valley Cottage resident and instructor at Summit School, they tend to be amazed and overjoyed. Cars stop and wave. Even Governor Andrew Cuomo is in awe, sharing photos of the goats in a recent pandemic email briefing under the heading, “Deep Breath.”

Scout and Sawyer, as the two goats are named, are lively Summit School student companions along with five chickens, a bunny, and two large dogs housed in a riverside barn with what Sicari calls a “million-dollar view.” Raising, feeding, and caring for animals as a student learning experience is the brainchild of Sicari, a physical education instructor at Summit School for the last seven years. Not only have the goats helped many students, they have brought much needed joy to villagers during the pandemic crisis.

Summit School is located at 339 N. Broadway in Upper Nyack across from the Upper Nyack Elementary School. The Summit School’s 10-acre campus is the former estate of Nyack native Justin DuPratt White. White was a New York City lawyer who, among other civic activities, was the first secretary, and later the second president of the Palisades International Park Commission, back in its early days when thousands of acres of parkland were saved from development. On the campus sits White’s Tudor-style estate house, stable, greenhouse, and spring-fed pool. 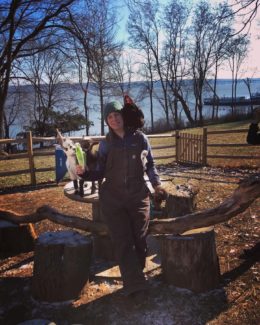 Sicari at the riverside home of Scout and Sawyer.

Goats are friendly, agile, curious, intelligent, and communicate with humans as dogs and cats do. Goats are also great companions around most other animals.

Sicari started her student animal care program as an offshoot of walking daily with her students. She started with a single dog, a boxer named Moose. A second dog, a Goldendoodle named Rudy, previously owned by Summit School principal Deborah Dolan, was then added. Next came five chickens (the village limit) and a bunny. While obtaining hay for the animals at Nickel-O-Stables on Strawtown Road in West Nyack, Sicari became intrigued by their goats and had the idea for adding goats to the menagerie of therapy animals.

She researched goat care for a number of months, then obtained school approval and a special permit from the Village Zoning Board. The goats were obtained from a goat farm in NJ, the same farm where Moose and Rudy were sent so they could get used to being around goats. After a year together, goats and dogs get along. Scout and Sawyer are still a little shy around other dogs, as they were at first with cars.

When all was set, Sicari acquired a pair of two-month-old kid sister Nigerian Dwarfs. Students bottle fed the goats until they were old enough to eat solids. Students named them Scout (inspired by To Kill A Mockingbird) and Sawyer (The Adventures of Tom Sawyer). Now 1 and 1/2 years-old, Scout and Sawyer have made students happy every day. At Memorial Park, kids go nuts around the goats. Sicari was amazed with the results. “I never expected it to be this awesome,” she says.

Walking, Feeding, and Caring for Goats 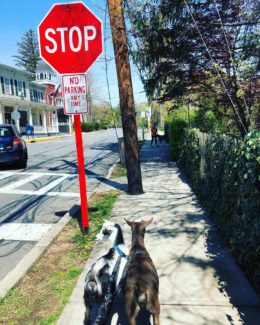 Scout and Sawyer walking near Village Hall in Upper Nyack.

Goats get most of their exercise from browsing for food and through play with each other, and at Summit School, with the students. As an added bonus, Sicari decided to try walking the goats since physical activity is important to Summit School students, to say nothing of the dogs, teachers, and all living things, especially this year. To the delight of all, walking the goats was a success for everyone, reinforcing Sicari’s motto, “fresh air and exercise for all.”

The goats are walked on a leash at least five miles a day so they encounter people and dogs. They are still wary of dogs and sometimes encounter off-leash dogs on long hikes. So far, no problems. Their longest walk was nine miles in Harriman State Park, which they travel to in a minivan. On the ride, Sicari has to put them in a dog cage so they don’t eat their seat belts.

Goats eat just about anything: leaves, vegetables, weeds, and even poison ivy. Many invitations have been given to Scout and Sawyer to visit villagers’ yards to eliminate poison ivy, so many that Sicari says it would take the goats 10 years to handle all the poison ivy.  Unlike sheep, they don’t eat closely clipped grass. They need lots of care. They’re fed twice a day, groomed, and cleaned.

Sicari cares for the goats all week and gets help from co-workers and students when she’s gone. Like most children, Sicari’s 10-year-old daughter Luci loves the goats. Sicari says they were really beneficial when her daughter was in isolation home schooling during the pandemic. Walking with them every day was a joy. Sicari wasn’t surprised “that the goats made her daughter and students happy.” But, she says, “the effects on the community as a whole have been incredible.” 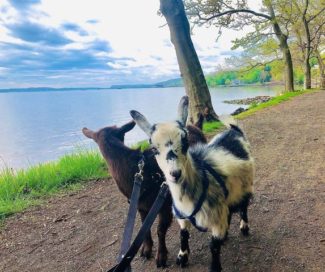 Scout and Sawyer on the trail at Nyack Beach State Park.

Consider yourself warned. At any moment walking around town you might find two short, hirsute, beautiful, and friendly goats on leash. And they might just make your day.

Oh, and a tip: If you really want to make some furry friends, have a few peanuts or crackers on hand.

Nyack People & Places, a weekly series that features photos and profiles of citizens and scenes near Nyack, NY, is brought to you by Sun River Health and Weld Realty
In this article:Anna Sicari, goats, jason DuPrat White, Summitt school, upper nyack