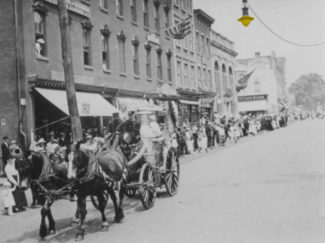 Photo of a parade in front of the Commercial Building on South Broadway in Nyack showing the type of electric streetlight first installed in 1887. Note the rather crooked shape of the pole supporting the light.

Electricity was in the air on Friday night July 8, 1887. The full moon paled by comparison. Villagers celebrated. Bands paraded through the streets. Fireworks were launched. Politicians made speeches. Houses glowed. An elaborate celebration dinner was held at the largest hotel in town. Across the river, Westchester residents envied Nyack’s big city lights.

We take nighttime lights for granted now (except when the power goes out) but they were a huge deal 133 years ago. Our village nights were changed forever.

The Advent of Electrification 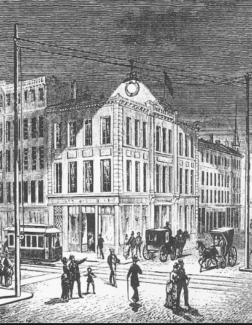 A generic line drawing showing how arc lights were strung as high as possible above city streets in the late 19th century.

Before the advent of electricity, streetlights were either fueled by gas or kerosene. In 1872, 442 Nyack villagers passed a streetlight referendum and then purchased 50 chestnut poles for $2.32 each and 50 lanterns at $3 each. The lamps were placed on Broadway between Third Avenue and Depew’s bridge that crossed the deep Nyack Brook gorge at Depew Street, on Main Street between Piermont and Franklin, and on Franklin from Main Street to the railroad depot.

Gas was too expensive, even though the Nyack and Warren Gaslight Company on Gedney Street had locally produced gas for home lights since 1859.  Instead, streetlights were lit rather poorly by cheaper kerosene. Mr. John Coates was hired to light the lamps each night. Citizens complained that he didn’t clean them and left them burning all night. By 1887, citizens had enough of kerosene. A referendum to install electric streetlights was passed in Nyack, 93-62 votes. 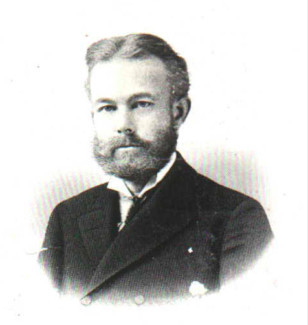 Clarence Lexow during his days as a New York State Senator and head of the Nyack Electric Light Company.

A new company was formed as a result of the vote. It was the first electric company in Rockland and Orange counties. Republican State Senator Clarence Lexow was elected President of Nyack Electric Light Company. General James H. Blauvelt was elected vice-president. Selling 2,000 shares at $10 each, Nyack Electric Company raised $200,000 in capital assets. Company officers were not paid.

Power was generated by steam using an 80-horsepower engine and 100-horsepower boiler built by the American Electric Manufacturing Company. The plant was centrally located in Nyack next to the Nyack Brook on Jackson Street.

Fifty arc lights were installed. Arc lights cast a harsh glare and require more maintenance than incandescent lights, which appeared in 1890. Each 2,000 candlepower light was to be run until midnight for at least 20 nights a month. 3 circuits were created initially: In South Nyack, Nyack, and a commercial area covering about 8 miles in total. Upper Nyack was not lit until later.

The company was extremely successful selling electricity throughout Rockland and North Jersey. By the turn of the century, the company was acquired by S. R. Bradley and named Rockland Light and Power with offices at the corner of Main and Broadway in Nyack. Through mergers and acquisitions, the company became Rockland Light and Power (including gas) in 1951, replacing the Broadway Hotel next to Lydecker Street. The building now houses Nyack Village Hall. By 1958, the company became Orange and Rockland Utilities, the direct predecessor of the current power company. 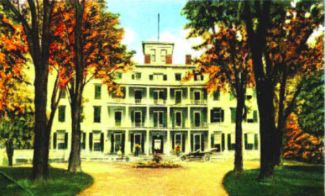 Postcard of the Tappan Zee Inn in South Nyack, approximately 1910, later than electrification. The hotel burned down in 1932.

A parade was held to celebrate that electric first night. The Nyack cornet band led the procession, followed in line by the Village Board, the 2 Grand Army posts, the Sons of Veterans, and the entire Fire Department. Fireworks were lit along the way to add sparkle to newly illuminated houses. Marchers headed north on Broadway to Lyeth’s store, Upper Nyack’s general store that is still standing at the corner of School Street (the building is immortalized in the Seven A.M. painting by Edward Hopper). They turned around and marched to South Nyack, past Lexow’s gothic mansion at 298 Piermont Avenue, and onto the grounds of the Tappan Zee Inn (formerly the Rockland FemaleInstitute), Nyack’s largest meeting space at the time. The lawns and large trees were aptly lit for the occasion. As the long parade ended, the firemen headed to Fraser’s at Depew’s Place on South Broadway for food and drink.

The ornate dining room of the Tappan Zee Inn where a feast was held on July 8, 1887 celebrating Nyack’s new electric streetlights.

About 30 Nyack men and one woman were the guests of Clarence Lexow at the hotel. The dinner prepared by the hotel was said to be unusually festive, although the menu has been lost to time. Just about everyone made a speech, 20 in all. The first was by the host and leading local politician, Clarence Lexow. Speeches then followed by the village leaders, the police chief, the press, the president of the bank, the youngest stockholder, the agent of the American Electric Light Manufacturing, and lastly, by J. O Davidson, on behalf of what the Rockland County Journal called “Woman, lovely Woman.” It must have been a very long but very happy meal with locally made cigars perfuming the air.

Not to be outdone by the dignitaries, the hotel owners held a second elegant repast for invited guests who had earlier reviewed the end of the parade from the hotel balconies. The streetlights passed their beta test in a blaze of glory. In many respects, it was the brightest Fourth of July holiday celebration ever in Nyack.

Photos courtesy of the Nyack Library.
Michael Hays is a 30-year resident of the Nyacks. Hays grew up the son of a professor and nurse in Champaign, Illinois. He has recently retired from a long career in educational publishing with Prentice-Hall and McGraw-Hill. Hays is an avid cyclist, amateur historian and photographer, gardener, and dog walker. He has enjoyed more years than he cares to count with his beautiful companion, Bernie Richey. You can follow him on Instagram as UpperNyackMike.