If you’ve spent time on the Mall and Literary Walk of Manhattan’s Central Park, perhaps you’ve passed statues of Juliet from Romeo and Juliet, Mother Goose, Mary and Her Little Lamb, and cackling witches among the sculptures of war heroes and scientists. You may have noticed something strange: only the men remembered in the park actually lived. None of the women honored are real. 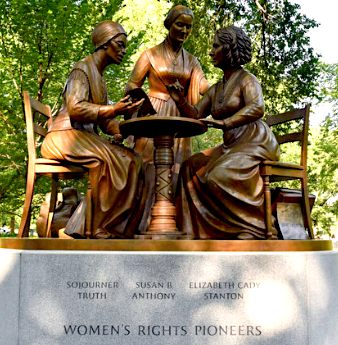 That was until Meredith Bergmann unveiled her Women’s Rights Pioneers Monument of Elizabeth Cady Stanton, Susan B. Anthony, and Sojourner Truth in New York City’s Central Park on August 26, 2020, breaking what Nyack’s Suffrage Forward Chair Paulette Ross is calling the “bronze ceiling.” The group will hold an online panel discussion on Thursday, November 19, at 7p, exploring the process of conceiving, advocating, and fundraising for the creation of this groundbreaking public sculpture. The public is invited to join this Zoom event, however online pre-registration is required.

The event honors the 100th anniversary of the ratification of the 19th Amendment to the U.S. Constitution, which gave women the right to vote, and the 200th anniversary of the birth of Susan B. Anthony. The panelists will be artist Meredith Bergmann, Pam Elam, and Coline Jenkins, with moderator Clare Bowes Sheridan. A live ZOOM chat will follow the webinar with Shirley Crabbe, Susan Deeks, George Ivolin, Risa Hoag, Carol Simon Levin, Susanna Rich, and Maya Wilson.

“For me to get a credit card in 1970, I had to have my husband’s signature on the application. I was not paid the same amount of money as a man in a company I was working in,” Ross says. “I have been fighting for a long time to be equal.”

Discrimination, past and present, will be one of the many points of the evening’s discussion. “It is a shame that black women were not in the forefront of what we know of as suffrage. Yes, there were lots of suffragists who were prejudiced,” says Ross. “There were some who believed at the time if you wanted to get the south to vote with you, they would not vote for a woman of color. Some of them rationalized that exclusion within the movement.”

Bergmann’s statue depicts Elizabeth Cady Stanton, Susan B. Anthony, and Sojourner Truth in discussion at a table and was selected by the not-for-profit group Monumental Women as a representation of the many women who fought for women’s suffrage, women’s civil rights, and the abolition of slavery. Monumental Women is an all-volunteer  organization founded in 2014 to create the first statue of real women in Central Park. They raised raising over $1.5 million with the help of private donations and the Girl Scouts, to fund the statue. They also worked tirelessly to carve out a space for their dream within New York City’s bureaucracy.

Bergmann’s hope is that viewers will make up their own story about what the three historical figures are saying, to offer a more nuanced depiction of women’s role in the history of liberation movements by animating Sojourner Truth speaking, Susan B. Anthony organizing, and Elizabeth Cady Stanton writing. The staging of the women is what I admire the most about the statue, that the women are shown together, in conversation, an image starkly contrasting the park’s statues of women either fully consumed by their romantic desires, whimsy, or caregiving duties. To show women at work, in debate, potentially disagreeing with each other, is a representation I find more familiar to my own life. While romantic and caregiving parts of me exist, I would not wish for them to define me, or to define the history of women who have come before me or who will follow. The scene feels closer to how I spend most of my attention: the classroom, in conversation with other artists and friends, and the difficult decisions I and many other women must make in our daily lives when it comes to how we wish to represent ourselves and how we will engage in the fight for what we believe to be urgent.

“Our history plays such an important part in our quest for equality. As we’ve learned from the past, persistence along with strength and courage leads to change. We still have much to attain so let’s make our foremothers proud and continue breaking ceilings for all,” Ross shares. The litany of Central Park’s statues of fictional women who often lived at the hand of male authors is a dangerous act of erasure in a city that claims itself as the epicenter of cultural life. If the 1892 sculpture of Christopher Columbus didn’t signal enough of a need for a refresh, the excitement over Bergmann’s statue certainly makes its significance clear.

I think of the catharsis of protesters bringing down racist monuments across the country this year, of how what we carry in our symbols and languages eventually defines our imaginations. In Nyack, activists continue to organize in restoring Hezekiah Easter’s memory, and to protect Mount Moor Cemetery. I also think of the Bench By The Road that Toni Morrison dedicated to Cynthia Hesdra at Nyack Memorial Park and the recent restorative work of Jo Nivison Hopper’s paintings at the Edward Hopper House. Knowing there is now a tribute to women who lived not just in fairy tales, but in the struggle for the recognition of their humanity, at one of the most iconic sites of New York City, creates a welcome pause.

Looking ahead, Paulette Ross has her eyes on another opportunity for restoration: the Equal Rights Amendment. “They had the votes that they needed for the ERA, but the archivist needed to formally write it and put it in the archives. For whatever political reasons, this waited and waited and now has expired so you either have to get an extension to pass the ERA or you have to start all over again.”

Juliana Roth is a writer from Nyack, NY and  serves the Chief Storyteller at the Edward Hopper House Museum and Study Center.