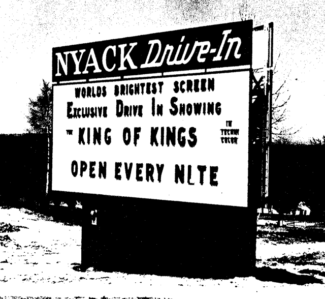 A 1962 Chevy Bel Air station wagon turns off Rt. 303 into the Nyack Drive-in just before sunset. Inside, kids in pajamas, moms with homemade popcorn, and dads with a cigarette are ready for a double feature. Nearby, children in the playground squeal at the goofy countdown cartoons before the main feature starts. This family scene was repeated throughout America at some 4,000 drive-ins in the 1950s and ’60s. Our nostalgia for a simpler era during the 2020 pandemic has sparked a renaissance in the few remaining drive-ins.

The Nyack Drive-In, which to be fair was actually in Blauvelt (just over the village line on Rt. 303), was the last drive-in to open in Rockland County in 1962, and it continued operating until 1987. As the “newcomer,” Nyack Drive-In promised the brightest screen in the world, a shining star that blazed for a brief 25 years just west of Nyack.

Rockland’s first drive-in was the eponymous Rockland Drive-In in Monsey on Rt. 59. Built by local businessman Harry Applebaum, the theater opened on September 8, 1955 with space for 1,500 cars. A cafeteria style snack bar was able to sell hotdogs, pizza, and the like to 500 people during the 15-minute intermission with patio-style seating nearby. An onsite playground accommodated children. At its opening, speakers and heaters for cold weather were handed out at the 4-lane ticket booths. A rear exit eased traffic congestion. 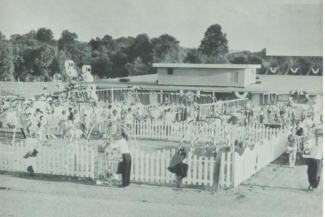 The 303 Drive-In was perhaps Rockland’s most famous. Located on Rt. 303 in Orangeburg, the theater opened on August 2, 1956. The Skouras Company-owned theater with room for 1,800 cars opened at 6:30p so kids could amuse themselves in a large playground with a motor-driven Ferris wheel and carousel. The theater would play the main feature twice with the second feature sandwiched in between. Ads for the opening, however, only mention one show, The King and I, starring Yul Brynner and Deborah Kerr. The theater closed in 1988, but its famous marquee sign on Rt. 303 survives as a marquee for the 303 Nursery.

Because it was the last to open and was located midway between the 303 and the Rockland Drive-Ins, the Nyack Drive-In established itself by promising the brightest screen in the world. As a unique feature, the owners, Harry and Joe Applebaum, acquired a pre-existing 9-hole, par-3 golf course into their 45-acre grounds with room for 1,250 cars. 2 separate entrance roads off Rt. 303 joined together into a long, wide entrance ramp leading to ticket booths that were 30-feet above the actual theater floor. The roads were tree-lined, had a reflecting pool, and passed the golf course.  A central concession stand promised 40 different items on opening day, and the playground had a little train, inoperable by 1970. The theater also provided a dial-in movie listing with 24/7 times, which you could book by dialing EL 8-184. Later the theater was managed by United Artists Theater Company. 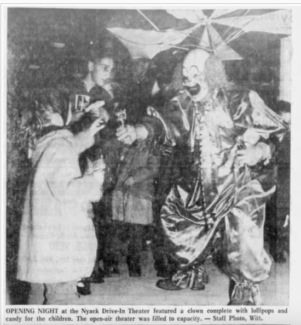 The Nyack Drive-In opened on April 17, 1962, featuring the 1961 epic,  The King of Kings, with Jeffrey Hunter as Jesus. All cars on the first night and the first 500 cars during the rest of opening week received free doughnuts, ice dream, coffee, and a gift.

More adult fare was shown to attract a different audience as family audiences declined in the late ’70s. Some of the diners at Joe and Joe II across from the theater complained about nudity that they could see while dining. The theater came under attack by the Rockland County chapter of Morality in Media for violating the state penal code that prohibits showing of sexually explicit films in public places. The district attorney stated he would look into the matter with the intention of eliminating X-rated films, not R-rated films. Larry Martello, the 28-year-old manager of the Nyack Drive-In, said, “It just wasn’t so. The restaurant is no longer in business anyway.” Martello also refuted another myth: that the film distributor sent a hard-core version of an X-rated film by mistake that was not discovered until after the movie had started. Nyack Drive-In did in fact show soft-core X-rated films during the winter months. 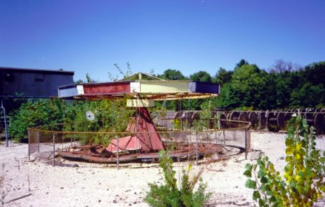 The remains of the Nyack Drive-In playground in 2007.

As the halcyon family days of Walt Disney movies mixed in with From Russian With Love faded, young people became the main market as movie fare changed. By 1980, Nyack Drive-In was showing double-features like the Sensuous Nurse and Private Lessons or the Texas Chainsaw Massacre and I Drink your Blood. Teenagers would hide friends in the trunk to avoid fees when a per-head ticket price replaced a per-car price. Others would speed through the ticket booth and attempt to hide among the other cars to avoid paying. It was a game that the drive-in managers knew only too well.

Drive-in managers always had a love-hate relationship with the younger crowd. At the Rockland Drive-In, staff were told to rap on the window if no one was visible in the car. According to the manager, the fear was that someone would fall asleep and succumb to carbon monoxide poisoning on a cold night. Near its end in 1987, the Nyack Drive-in became a meeting place for 18- to 30-year-olds. Young people, standing around smoking and drinking, bothered other customers according to Martello. 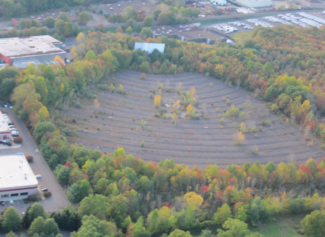 Aerial photo of the Nyack Drive-In site in 2010. Photo by Chris Maget.

The Nyack Drive-In, along with many of its ilk throughout the county and the nation more broadly, closed in the 1980s as a result of changing interests and new technology. Movies drifted away from family fare. The advent of the VCR and cable television further eroded the audience for the old-time entertainment.

The world’s brightest theater went dark in September, 1987 after 25 brief years. The last picture showing is not recorded but the last ad was for Saturday and Sunday showings on September 5 of the Rom-Coms, Can’t Buy Me Love and Outrageous Fortune starring Bette Midler. Around the same time, Orangetown selected the site as a possible Rockland County trash incineration plant that was eventually located elsewhere. The theater’s golf course survived as a driving range and miniature golf course for many years. Fed Ex built a distribution facility over much of the theater grounds. For a long time, the screen and the parking area with speaker poles were visible. Barely recognizable today is part of the old entrance now called Al Foxie Way, commemorating a fireman who died trying to save his son from a fire and who owned a restaurant called Al Foxie’s near the entrance to the Nyack Drive-In.

Memories of the Nyack Drive-In evoke a powerful urge during the pandemic of 2020 for a simpler time when families enjoyed summer evening entertainment in their darkened cars and weren’t afraid of the people in the others.