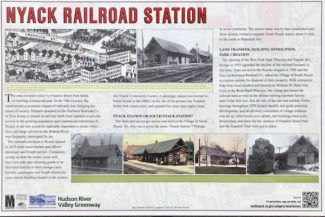 The new Esposito Trail signs started with the deepening cracks in the tennis court of South Nyack’s Franklin Street Park. Andrew Goodwillie, a South Nyack trustee, and marine geophysicist from Lamont-Doherty Earth Observatory, was told by the village DPW that the cracks were related to an earlier building on the site. Goodwillie was astonished to learn that the old structure was a busy train station that had been in operation for almost 100 years. Surprised that the park had once been the location of a bustling passenger and freight transportation hub, Goodwillie came up with the idea of placing a visual marker at the site showing the old train station.

Working with a team of local history detectives and a graphical specialist, the project mushroomed into 9 different, detailed historical wayside markers, all now installed along the former Northern Railroad train line on a 1/2-mile stretch of the Esposito Trail. Additional signs are at the Piermont restored train station and at the Sparkill railway fork. Each sign is a remarkably clear distillation of photographs, maps, newspaper clippings, postcards, and oral histories. They are situated trail side and provide walkers and bikers with a perfect place to contemplate what was once located nearby and how much has changed as the Nyacks evolved from an industrial center to a residential community. 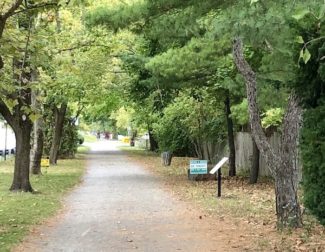 View of Esposito Trail with the Nyack Ice and Coal Company signs on the right side facing the trail.

One marker, at the intersection of South Franklin Street and Hudson Avenue, commemorates where the railroad once ended at a turntable for rotating engines around. At the other end of the Esposito Trail, a marker is placed near where the trail meets the NYS Thruway Shared-Use Path. The Esposito Trail is a perfect location for the signs, which focus on the almost century-long impact of the railway on this area.

The Esposito Trail was the brainchild of then South Nyack mayor Raymond Esposito. South Nyack had little parkland and Esposito had the idea to convert the old train line into a park for health and exercise. Esposito was way ahead of his time. The idea of converting an unused rail line to a trail for walkers, runners, and bikers was revolutionary in the late 1970s. Since then, the Rails-to-Trails movement has swept America, providing new car-less walking and biking opportunities through America’s cities and countryside. 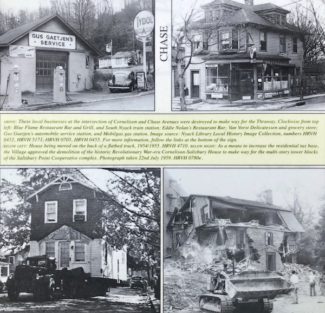 The volunteer research team of Goodwillie, South Nyack Village Historian Myra Starr, and Historical Society of the Nyacks Trustees Jennifer Rothschild, Tom Hackett, and Evelyn Fitzgerald met weekly for almost 3 years to analyze photographs, documents, and maps. The quantity of material and the team’s enthusiasm allowed an expansion of the number of sites to be covered and a historical timeline to be generated for each. Hackett and Starr grew up in South Nyack and provided personal recollections and anecdotes to augment formal archival materials. Starr, for example, remembers walking to school with her sister through the rubble from a deadly factory explosion that is highlighted in one of the trail markers.

Core source material came from the collection of photos, maps, documents, and newspapers held by the Nyack Library Local History Room and the Historical Society of the Nyacks. The team spent many hours looking at photos and maps to determine and cross-check information. The team also made extensive use of a range of the many editions of Sanborn maps that show buildings in close-up detail over time. One other public benefit of the detectives’ efforts was in soliciting money to have high-resolution scans of the maps made for online use at Nyack Library. 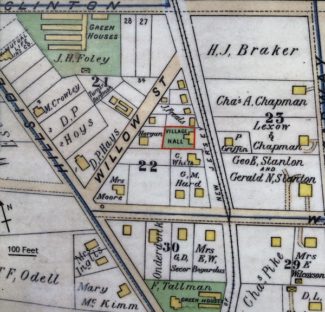 Detail from a Sanborn map showing the South Nyack Triangle.

After the team had decided on the content for each sign, South Nyack resident Michael Lockett, owner of M-Squared Creative in Nyack, volunteered his graphical design expertise to present the selected information in an engaging, attractive visual format. Lockett’s designs bring the material to life; written content, photos, post cards, maps, and captions are clearly presented. Nyack Library’s Kat Sullivan and Carol Weiss kindly rescanned from the originals many photos at high-resolution for use in the signs project.

The 9 South Nyack signs are deliberately unnumbered. While each is independent of the other, they are linked by the impact of the former railroad.

The trail signs are just the tip of the iceberg. The core team synthesised and integrated a tremendous amount of material for each sign. This “long-form” content, along with high-resolution copies of the signs and annotated maps and photos, are to be presented on a South Nyack local history website, currently being designed by Goodwillie. When it is possible to do so, Goodwillie plans to offer guided walking tours to share the wealth of knowledge he has accumulated. His enthusiasm for the Village of South Nyack, for what it once was and what it has become, coupled with the peaceful setting of the Esposito Trail, is an illuminating experience.