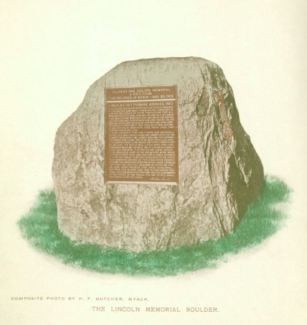 The Lincoln Memorial Boulder as shown in the Memorial brochure.

The Gettysburg Address, given by Abraham Lincoln on Nov. 19, 1863, looms large in our national imagination, but is, in reality, quite a small document: it’s only 271 words! In Nyack, the famous speech is commemorated with a “yellow” memorial boulder, the bronze plaque created with funds raised by the children of Nyack in 1908.

Originally near the Hudson River, it was moved to the lawn of the Nyack Library. The Lincoln Memorial Boulder stands today as a testament to Lincoln’s healing words, to the efforts of patriotic school children, and to the sacrifice of veterans like local resident Private James Provost Babcock, a wounded Gettysburg soldier who attended the ceremony.

Orangetown and Rockland County were strongly Democratic, favoring the United Party 2-to-1 over Lincoln’s Republican Party in the 1860 election. A year after Gettysburg, Rockland favored McClellan over Lincoln. Despite the overall pro-Democratic party, anti-war stance, Rockland sent 558 enlisted and drafted men to the Civil War; a total of 89 were killed in battle.

The Reception of the Gettysburg Address in America & Rockland County 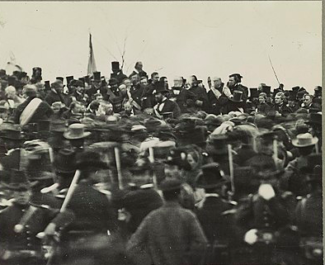 One of the few photos of the Gettysburg Address. Lincoln is seated just to the left of the standing person in the center of the photo.

Reaction to Lincoln’s speech was more negative than positive in 1863. The Chicago Times stated that “the cheek of every American must tingle with shame as he reads the silly, flat and dishwatery utterances.” The Times of London found the speech “ludicrous.”  The New York Times complimented the speech and reprinted it in full.

Rockland County Journal, a local Republican-leaning weekly, made no mention of the address in its November 21 issue. Unionist patriotic poetry appeared on the front page and the battle of Gettysburg was briefly mentioned in one human interest story. Two pro-war editorials appeared on page 2. The paper excoriated Democrats for an end-the-war plank in their party platform as well as comparing northern copperheads with legislators in North Carolina.

The paper reported daily draft totals: over the previous five days, of the 469 men that were interviewed for the draft, 183 were to report to service, 54 provided substitutes, and 43 were “aliens.” The rest were excused for health and family issues. 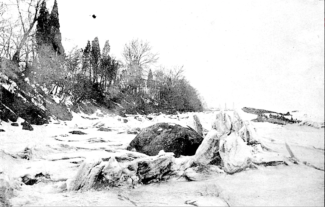 Winter photo of the “yellow” rock in the river in Upper Nyack.

A couple large rocks in the Hudson River were once swim and bathing markers. Both were erratics, carried by glaciers to rest in the river bed. And both were big enough that at high tide, boys could dive off them. They were ¼ mile apart, marking a distance for swim and rowing races. The “yellow” rock was once just north of Peterson’s boat yard in Upper Nyack. It was reported as news on June 4, 1892 that a large party of boys went in swimming from the “yellow rock” and declared the river warm enough for swimming. The “black” rock was near the shore north of the Main St. docks.

Charles M. Montgomery, of Waldron Post 82, Grand Army of the Republic, came up with the idea of the memorial boulder. In 1908, children donated money to fund the $200 memorial costs. Much time was spent finding the right boulder. Eventually the “yellow” rock was chosen. The boulder was made of granite, geologically named gneiss, a metamorphic rock with bits of white feldspar and green hornblende. 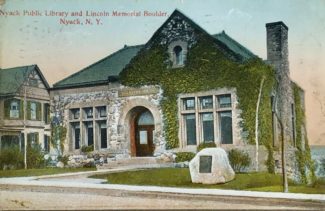 Postcard of the Nyack Library and the Lincoln Memorial Boulder.

Honey or “yellow” granite was once quarried in northern Westchester in what is now Sylvan Glen Nature Preserve. This granite was used in constructing the Cathedral of St. John the Divine in NYC. It is possible that Nyack’s “yellow” erratic rock was originally from this location.

The complex problem of moving a 10-ton boulder from in front of the Cushing family residence in Upper Nyack to the library was solved by teamwork. William Parrot & Sons of Newburgh moved the boulder from its resting place to the Main St. docks by tying the rock beneath their boat at low tide. As the tide came in, they were able to lift it underneath the boat where it weighed less because it was buoyed somewhat by water. The boulder was hauled ashore somehow. There it was placed on a wagon under the direction of Waldron Post Commander Isaac Pye and hauled up the hill. They kept calling for more horses until eventually oxen were added to the team. Some 18 horses and oxen and 100 men finally got it up the river. The wagon was dragged to the library, and the boulder placed on a concrete pad.

A bronze plaque with the dedication “Soldiers and Seamen Memorial, a Gift from the Children of Nyack May 30, 1908” followed by Lincoln’s Gettysburg Address was affixed to a relatively flat segment of the rock facing Broadway. Affixed on the south side was the emblem of the Grand Army of the Republic. 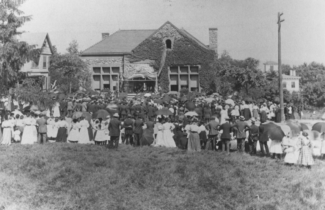 Crowd gathered to see the unveiling of the Lincoln Memorial Boulder in 1908.

The Memorial Boulder was dedicated at a ceremony on June 13, 1908 hosted by local Waldron Post 82, Grand Army of the Republic. Many Civil War veterans from the county attended. A parade with local police and fire departments, 2 bands, Civil War veterans, their sons, women from the relief corps, and children with flags paraded through downtown Nyack, passing the library once and then returning to the library for the dedication.

The boulder was draped in 2 flags until it was presented to Nyack Library Director Howard Van Buren by Montgomery. At the sound of a bugle the memorial was unveiled. Speeches followed, including by Arthurs S. Tompkins. The newspaper mentions that Tompkins’ address was particularly powerful, noting that Tompkins likened Lincoln’s address to the law-and-order victory of Governor Hughes against the wealthy in getting an anti-racetrack gambling bill passed in 1908. 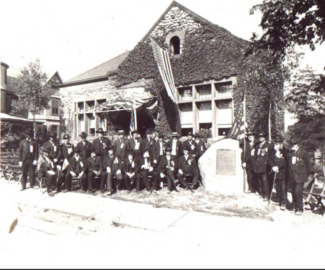 Civil War veterans at the dedication of the Lincoln Memorial boulder. James P. Babcock is in the front row, fourth from the left.

Many surviving Civil War veterans attended the ceremony, including James Locke, who was destined to be the last living Nyack Civil War veteran, dying at the age of 96 in 1935. James Provost Babcock also attended. Once a blacksmith, Babcock was wounded on July 1, 1863, the first day of the Battle at Gettysburg. Babcock, originally from Haverstraw, enlisted as a private at age 23 in 1861 in the DeNoyes company, named after 2 brothers from Haverstraw. The company was a part of “Warren’s Rifles” as the New York 95th infantry was first known and led by Captain Edward Pye, who was later to die at the Battle of Cold Harbor. On October 15, 1861, they left Rockland County on the steamboat Isaac P Smith and trained in Harlem. Out of the original 80 DeNoyes company enlistees that left for training, 12 died during the Civil War.

The 95th Infantry saw heavy action during the war, beginning with an important blocking action for retreating Federals at Sulphur Springs at the end of the Second Battle of Bull Run. It saw limited action but was present at a number of important battles–including Fredericksburg, Antietam, and Chancellorsville–before seeing action at Gettysburg

The First Day at Gettysburg 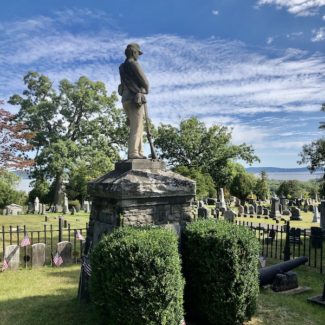 Babcock and the 95th arrived late on June 30, 1863, camping 4 miles south of Gettysburg. The next morning, they were
hastily marched into hot action west of Gettysburg to hold back the leading divisions of arriving Confederates. The morning fighting went back and forth until out-manned Union troops were forced back through the town of Gettysburg to Seminary Ridge. Troops on both sides were captured and made prisoner.

During the engagement, Babcock was wounded in the right arm, and was captured by the Confederates. He was left behind when the Confederates retreated on July 4. His wound was serious as he stayed in the hospital for 9 months. After leaving the hospital, Babcock enlisted in the Veterans Reserve Corp, performing light guard duty until September 1865.

Later, he lived in Central Nyack (then known as West Nyack) and was an active member of Waldron Post. Babcock died in 1910 and is buried in the Civil War veterans section of Oak Hill Cemetery.

The rugged “yellow” rock that became the Lincoln Memorial Boulder that stands today nestled among small trees and ground cover in front of the library is a story of not only geological steadfastness but human as well. Veterans like James P. Babcock punctuated Lincoln’s words with his courage. The children of the 20th century and today will long remember Lincoln’s admonition during our country’s most divisive era: that “government of the people, by the people, and for the people shall not perish.”