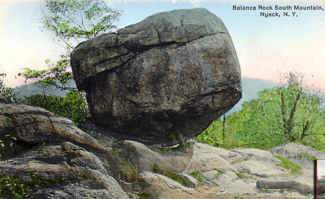 Balance Rock postcard with a view toward the west.

2020 is a perfect year to examine the subject of erratics, especially one named Balance Rock. An erratic, among its several better known definitions, is a geological term for a rock or boulder that differs from surrounding rocks and is believed to have been brought a long distance by glacial action. Balance Rock was the most famous erratic in the lower Hudson Valley because it was located near the top of South Mountain next to Tweed Blvd., just outside the borders of S. Nyack near Nyack College, South Blvd., 9W, and River Road.

Balance Rock was no little rock. It was approximately 15-20’ long, 10’ high, and 12’ wide. Hikers, horsemen, vacationers, boy and girl scouts, and, one imagines, Native Americans marveled at how it got there. A Romeo of 1911 carved the date and a name into the boulder that is visible today in a stone fragment. Any number of picnics occurred near the rock upon which everyone climbed for the panoramic view of the Tappan Zee. Balance Rock was embedded in children’s imaginations as it was the subject of a number of children’s fairy tales often repeated in Nyack school pageants.

The Geology of Balance Rock 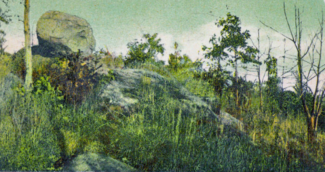 This tinted postcard shows a precarious Balance Rock from below on the Tweed Blvd. side.

The northern end of Balance Rock projected 5’ in the air and the lower and more narrow southern end often had stones used as steps so people could climb on top of the boulder. According to amateur geologists and Nyack High School teachers Karl Mattsen and Tom Perry, Balance Rock is made of gneiss, a rock far different than the diabase upon which it rested. Gneiss is about a billion years old and is frequently found near Bear Mountain. Balance Rock was moved by the large glaciers that covered the lower Hudson River valley during the Pleistocene Epoch that ended 10,000 years ago. Balance Rock had 6 depressions or “potholes” on 1 side that were formed by water and pebble action from a river or waterfall. Presumably, Balance Rock had a prior home in a steam near Bear Mountain.

The rock was carefully balanced on the highest point of South Mountain. While the rock appeared to be precariously lodged a few feet from a ledge, it was, in fact, very stable. The bottom of the boulder was relatively flat, sitting on flat diabase bedrock. And it was further propped up by several other stones lodged underneath. It might have weighed around 250 tons, and its weight also helped to keep the stone in place.

Tweed Blvd stretches from Piermont to S. Nyack along the Palisades ridge. It was named after a scheme by Boss Tweed and colleagues to build a road from New Jersey to a new resort hotel on Hook Mt. in 1871. The road was funded and partially built before the Tweed gang ran afoul of the law and the project was abandoned. The section now named Tweed Blvd. that ran right beside Balance Rock was partially completed in the 1870s but then left to return to nature. It was used as a bridle path and hiking trail for many years. 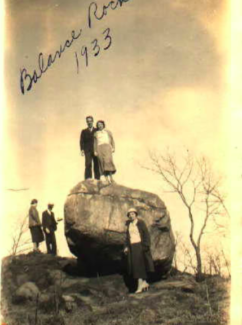 In 1933, during the depression, a plan was made to improve Tweed Blvd. for automobile traffic to connect 9W in Piermont with Bradley Parkway. The only work completed for many years was the removal of boulders and the building of a stone wall along the eastern edge. In 1939, work began in earnest.  At the Piermont end a large boulder with a split in it known as “fat man’s misery” blocked the way to 9W. It was so named as many such splits rocks are since only a thin person or child could squeeze through the gap. The rock was immortalized by Piermont poet Florence Ripley Mastin in 1968,

Half a century ago

Tweed Boulevard was a path

Great boulders on the mountain.

From Piermont to Nyack, midway,

We came to Fat Man’s Misery….

Many such rocks, also called lemon squeezers, can be found in Harriman State Park. This rock was blasted away.

The Blvd climbed to the eastern side just under the top of Mt. Nebo where a lookout tower in WWII was located–and, later, a radar station for a Nike missile base in Orangeburg. The road continues downhill, crosses Clausland Mt. Road, and then uphill again twisting and turning until it reaches the top of S. Mountain where Balance Rock was located some 600 feet high. In 1941, work crews, managed by the Palisades Interstate Park Commission, finished the road including the section running by Balance Rock, which by then was a part of Blauvelt Park. Preservationists sought to save 5 large oak trees known as the Five Brothers near Balance Rock. It is unclear whether the Five Brothers were in fact removed. 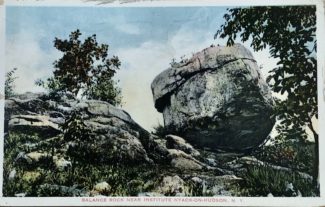 Tinted post card view from the north near where the Long Path and Red Trail meet.

Because of its romantic location, numerous legends and myths were told about Balance Rock. 1 referred to 2 Native American lovers who used the rock to escape wolves. A version, reprinted in Now and Then and Long Ago, tells the tale of two young Dutch children who were beloved by a Flower Fairy for their appreciation of spring flowers. The children are identified as part of the Claas Jensen family who received the first royal patent to the Nyacks, which was settled by his sons after the Tallmans. In the story, Claas Jensen lives in a brick house on the river and works as a traveling wheelwright. Once, while returning home, the mighty Storm King created a powerful thunderstorm and Claas, trapped on his boat amid winds, rain, and lightning, curses the Storm King.

In retribution, the Storm King grabs a large rock with which to smash Claas’ home along the river. The Flower Fairy stopped Storm King before the house, with its beloved children inside, could be smashed. Storm King dropped the rock on top of the ridge above their house, creating Balance Rock. Every spring, the Flower Fairy commemorated the beloved children by causing Dutchman’s breeches to flower near the rock. The story, told with more panache than this summary, was read to children at any number of local events. Dutchman Breeches do in fact grow on the rocky Palisade slope in early spring.

A Not So Happy Tale 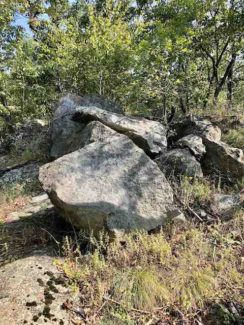 Fragments of Balance Rock litter the western slope of the lookout.

The romantic legend of Balance Rock crashed against the reality of the 1950s and ’60s. Beer cans, pop tops, and graffiti littered the rock. The seemingly precarious nature of Balance Rock became a temptation to Nyack High School boys who came up with the idea of pushing the rock down the mountain as a senior prank in 1958. The prank had been tried before without success because the rock was so stable it would have taken thousands of students to move it.

The seniors enlisted more boys than before and gathered equipment. Rumors of the impending prank that included mention of a dump truck were no secret; word reached the police, and officers from several different stations lay in wait on the appointed Friday night. Some 20 or more students parked nearby and approached the rock with crowbars, jack hammers, and ropes. They were chased through the woods by police and several were caught and taken to the Sparkill police station. After appearing in Sparkill court, they were tasked with cleaning up trash around the rock. Police action was enough of a threat to stop using Balance Rock as a senior prank.

Still, in the minds of parents, police, and the Palisades Interstate Park Commission, the rock was a danger to all whether through youthful mischief or natural events–despite the fact that Balance Rock would only roll into a deep ravine to the east or to Tweed Blvd to the west. In December, 1965, the Journal News reported that vandals had sheared off the top 1/3 “as cleanly as a bread knife.” However unlikely that sounds, a work crew from the PIPC completed the destruction in December. Boreholes, still visible in the remaining fragments, were driven into the rock, perhaps used for explosives. The pieces were left where they fell and are visible today on the western slope.

Thus, in a matter of hours, a billion-year old rock left lodged by a retreating glacier 10,000 years ago was destroyed. What might have been a glorious natural wonder and fitting tribute to the human spirit of 2020 was forever erased.

How to Find Fragments of Balance Rock Today 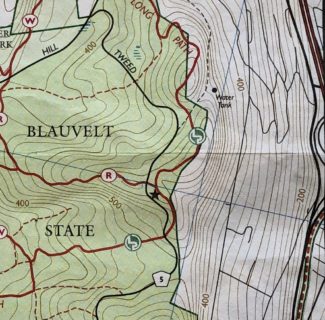 Hiking map of Blauvelt State Park. LP designates the north-south Long Path. The remains of Balance Rock can be found at the starred location just east of Tweed Blvd.

The remaining fragments of Balance Rock may be found just off Tweed Blvd. where a red-blazed trail head east uphill to meet the blue-blazed Long Path. The large fragments are grouped on the western slope (Tweed Blvd. side) just beneath the summit as well as further down the hill. A careful search of the fragments shows the date 1911 inscribed in stone. The summit is now overtopped by trees but nearby the skyscrapers of Manhattan and the Hudson River are visible. During winter, the views open up. 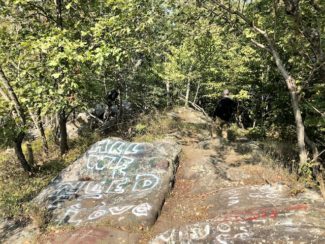 Graffiti-laden summit of the lookout. The site of Balance Rock is in the rear middle of the photo,

Back in the day, the summit was mostly free of trees and afforded panoramic views west over the Hackensack Valley and east over the Hudson River Valley and Westchester. There is no off-road parking at the spot. 2 cars can fit with 2 wheels on pavement. 2 cars can also fit farther south where the Long Path crosses Tweed. The site can be reconnoitered when taking longer hikes along the Long Path from Tackamak Park or from Nyack.