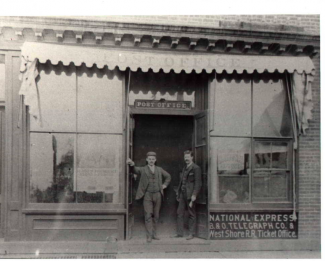 The difficult times the US Postal Service is currently weathering has renewed Americans’ appreciation for the vital service. But this week we take a look at a time when the postal service was even more integral to people’s lives.

When home delivery began in Nyack, villagers got 3 home deliveries a day. Our Federalist, art-deco style post office has been a community fixture for a long time, but its presence is relatively recent in Nyack postal history.

Early post offices migrated from one postmaster’s place of business to another every few years up and down Main St. and Broadway. It is no accident that the first 100 years of Nyack postal service at 10 different locations with 11 different postmasters follows the growth of Nyack from a rural waterfront village into a business center.

Was it in Upper Nyack or West Nyack? A couple competing stories have been told. Most historians mention the 1835 (or perhaps somewhat earlier) presence of mail delivery and pick-up at John Van Houten’s store at the Upper Landing in Upper Nyack. Steamships exchanged mail, goods, and passengers at the dock. A cigar box was used for mail. Patrons could drop off a letter or sort through the cigar box to find out if they had any. Usually someone picked up the mail for a neighborhood, the postmaster trusting that the postage fee would be paid later, as postage before the age of stamps was paid by the recipient not the sender. 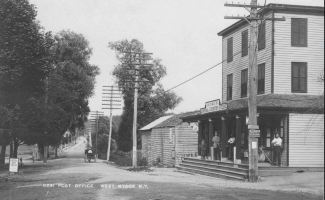 An alternative site for the first post office was suggested many years ago by Virginia Parkhurst, a local historian citing the Gilchrests, a couple stamp collecting dentists from Nyack. The Gilchrests traced federal records that showed William O’Blenis was appointed Nyack postmaster on April 2, 1833. O’Blenis had a general store in Clarksville at the intersection of the Nyack Turnpike and Sickletown Road and it would have been a likely location for a post office. Clarksville was the early name for what is now called West Nyack. The Gilchrest also claimed to have found evidence that the Upper Nyack post office operated earlier than 1833.

But short of inventing a time machine, we are unlikely to ever know which came first. 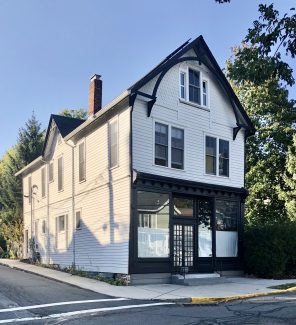 Lyeth’s Store is now a private residence on N. Broadway at the corner with School St.

The post office moved to a new location in the 1880s that housed Lyeth’s 2-floor general store at the corner of N. Broadway and School St. Upper Nyack historian Win Perry’s grandfather was appointed postmaster in 1893 at the time he was running the general store. The store remained a commercial building for many years. It is thought to be the location for Edward Hopper’s famous Seven AM painting. Upper Nyack remained a post office until home delivery was started in 1899.

The position of postmaster became a civil service position appointed by the US President in 1836. Through a system of patronage, political appointments trickled down to the local level every 4 years. As in many small villages, Nyack had no formal post office. Postmasters used their place of business as a mail drop-off and pick-up location. It’s possible that in addition to party affiliation, postmasters were appointed because their office or place of business was in a central location. 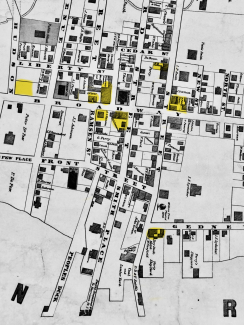 1859 map of Nyack. Different post office locations are marked in yellow. Many street names are different than today.

Christie’s tenure was fraught. Businessmen and commuters complained about late posting of the mail during her second term. Commuters liked to pick up their mail before the 7:30 train to New York City. Under Christie, mail posting was delayed. 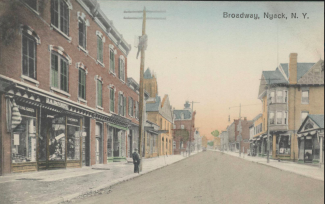 Postcard looking north on S. Broadway circa 1920. Post office block is on the left, Kilby’s real estate is in the small building before the Broadway Theater. On the right the prominent building is the Doersch Building. 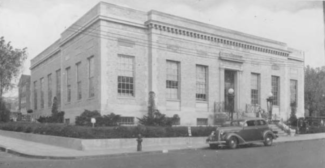 The genesis of the current post office is a lengthy and involved story. The federal government purchased land at the current site in 1892 but it took 40 years to build a new post office during the regime of Rockland County native Postmaster General James Farley. The new post office was opened with much fanfare on April 3, 1933, the 100th anniversary of the opening of the West Nyack post office. The Gilchrest brothers were there to cancel first day covers sent from the new office.

The new post office was a success. With the exception of the WPA murals and a few other contemporary features, the lobby and exterior are much as they were in 1933. By 1934, according to the Journal News, the post office had developed into one of the most economical businesses in Rockland County. When asked what Nyack was doing to make the postal department into a “monument to democracy” new postmaster W. Frank McNichol said, “Every economy consistent with the efficient administration of this department.”