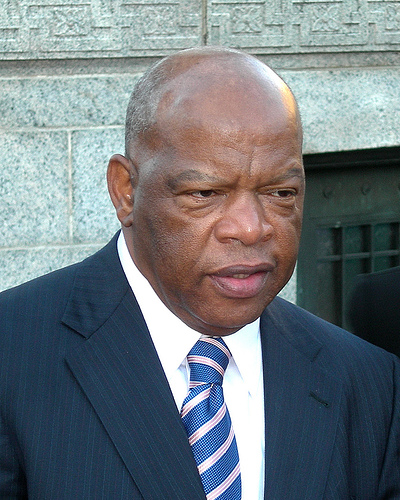 Last month, mourners assembled in Nyack at Hezekiah Easter Park to honor Congressman John Lewis, who died on July 17th. Attendees were offered flowers from the memorial as a symbol of their commitment to get in #goodtrouble. Hezekiah Easter Park is local landmark that’s become a daily site for local #BLM demonstrations, a public space many did not know the full history of, myself included. The park serves as a memorial to the first African American elected official in Rockland County, Hezekiah Easter, Jr, who was also a veteran, rotarian, and activist. It is fitting John Lewis was remembered there.

Lewis dedicated his life to protecting human rights and civil liberties so as to build what he calls “The Beloved Community” in America, a vision he held as possible until his final days, which happened to be in the midst of an international pandemic, historic protests, and historic violence against protesters. Local artists, advocates, and students will join together this month to screen John Lewis: Good Trouble in his honor. The title of the documentary comes from one of Lewis’s most memorable quotes: “Never, ever be afraid to make some noise and get in good trouble, necessary trouble.”

Director Dawn Porter imagines Lewis’s life for the viewer through interviews with Lewis from last year, when he was 80 years old. Lewis shares his formative childhood experiences and recalls a fateful meeting with Dr. Martin Luther King Jr. in 1957. Born to Alabama sharecroppers, Lewis grew up attending segregated public schools and felt his call to action in witnessing the Montgomery Bus Boycott. Following this call led Lewis to a life of social and legislative actions. He championed civil rights, voting rights, gun control, health-care reform, and immigration protections. Lewis’s memories of his journey are woven with interviews with political leaders and his colleagues.

Juliana Roth is a writer from Nyack, NY.