There’s no lack of bad news about plastics in the ocean: washed-up whales with plastic-packed bellies, South Asian beaches ankle-deep in plastic trash, sea turtles tortured by plastic straws… But it’s what you can’t see that may pose the greatest threat.

Aquatic microplastics—particles up to 5mm long (about the width of a pencil eraser)—make up about 94% of plastic pollution in our oceans. They are created when plastic items like fishnets and plastic bags degrade; or they can enter the water directly as tiny threads, beads, or shreds. It’s this second kind that even the most environmentally woke among us contribute to, big time, on at least a weekly basis. A modern convenience that we take for granted regularly spews these microplastics into our local waterways.

But who’s going to give up the washing machine? Not me, and probably not you. For an in-depth look at laundry as guilty culprit in the aquatic microplastic invasion, Earth Matters spoke with Lamont-Doherty Earth Observatory marine biologist Dr. Joaquim Goes, who supervised student-led investigations of microplastics in our local waterbodies last summer. What he and his students found will change the way you look at the weekly wash.

What inspired you to devise this recent student investigation on microplastics and laundry?

Recently, I was part of a panel discussion at a conference on sustainability in the fashion industry. I shared my suspicion that clothing was a big source of the plastic microfibers that we had been seeing in the Hudson and East Rivers. After the meeting, a fashion consultant asked whether there was any way she could help investigate this. She ended up getting us about 40 samples of fabrics from different parts of the world to work on, ranging from fleece to nylon, and even blended fabrics containing cotton and some polyamides. Over the summer, I had students work on finding out how much they each shed during the washing and drying process. 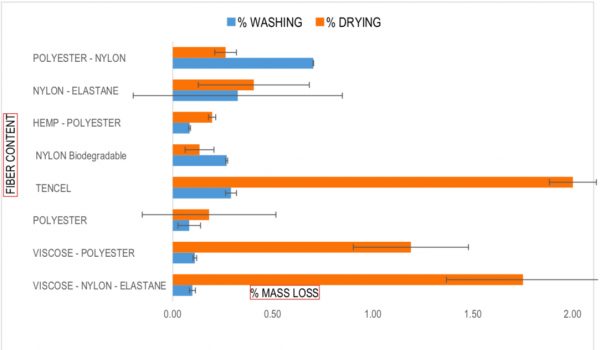 What did they find out?

The result was astonishing. Visually, you can see that they shed a lot—1 to 1.5% of their total mass for each washing. It turned out that the weight loss was greatest during the drying process.

So, using a clothesline, and avoiding the dryer, should keep these microplastic fibers from synthetic clothing out of the water cycle?

Not really. Many of those fibers are actually shed during washing, but bind to the fabrics because of the presence of water. During the tumble drying process, they loosen up from the clothing, and get into the lint. Even if you hang your laundry outside to dry, these microplastic fibers will shed. A slight amount of wind will carry them into the environment and, eventually, into water bodies. 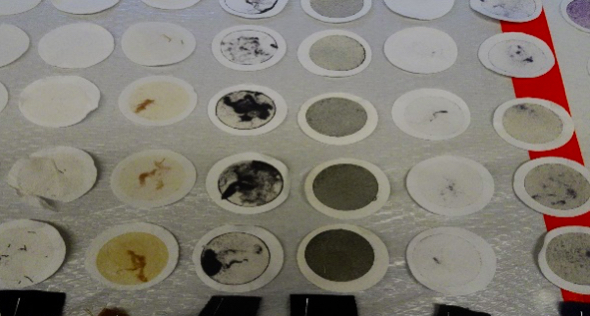 And a lot of that microplastic-laden lint gets exhausted out into the air from the dryer vent, too. I can just imagine how much is spewed out of urban laundromats.

Yes, you can find these plastic microfibers everywhere, mostly from clothing, where laundromats in cities and towns emit a lot of particles into the air. They enter into homes, and into water bodies.

When did this microplastic aquatic pollution from clothing start?

We did an earlier study in Central Park, looking back in time by examining sediment cores from the bottom of the lakes there. We could see a steady increase in the amount of microplastics in these sediments over time, especially since the 1960s, when we began to use plastics in a big way.

We also had students take samples from the Connecticut River, near a wastewater treatment plant, as well as in Flushing Bay and Newtown Creek. These were all loaded with microplastic fibers and plastic microbeads. These particles, by the way, are too small to be filtered out in the wastewater treatment process.

But isn’t there a ban on microbeads in cosmetics and personal products?

The Microbead-Free Waters Act of 2015, which took full effect on January 1, 2018, was legislation in the U.S. Congress spearheaded by our own Senator Kirsten Gillibrand. It banned microbeads in cosmetics, toothpaste, and other rinse-off personal care products. But it left out industrial products, including laundry detergents.

For last summer’s laundry study, I asked the students to look at detergents themselves to see if they had plastic particles. The results were shocking. Some of them were loaded with microplastic particles. We don’t know if they are meant as abrasives to boost cleaning power, or just put in there to increase the volume. We tested different brands, and some of the most iconic American laundry detergents contain the highest volume of microplastics, adding the equivalent of about 2.5 million microbeads per load of laundry.

This microbead ban must be updated to include laundry detergents. 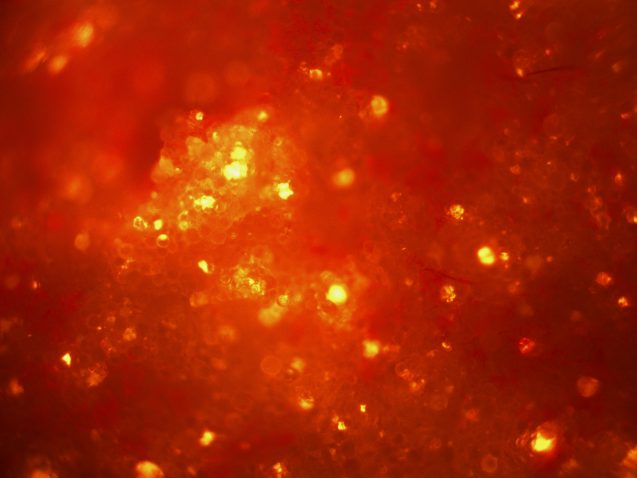 Plastic microbeads in a popular brand of laundry detergent. The microbeads fluoresce as a part of the students’ detection methods. The most egregious results were from an exceedingly popular detergent brand, which was found to contain approximately 178,000 microbeads in one milliliter of detergent. That’s equal to over 2.5 million microbeads per load of laundry. Photo: Asya Surphlis.

If these nearby water bodies are loaded with microplastic beads and clothing fibers, it must be getting into the food chain as well, here and in the open ocean. Do you have any recent studies on that?

We recently had student researchers look at seafood available in local grocery stores, focusing on shrimp from different parts of the world. I advise people to de-vein shrimp before cooking to remove the digestive tracts, because they contain a lot of plastic.

Students from New York Harbor School found a forest of plastics in the digestive tracts of local oysters. Oysters serve to filter out pollutants, including these plastic particles. But all this plastic in their digestive tracts could affect their growth, which could, in turn, have a negative effect on creating oyster reefs in and around New York Harbor to help protect it from storm surges. 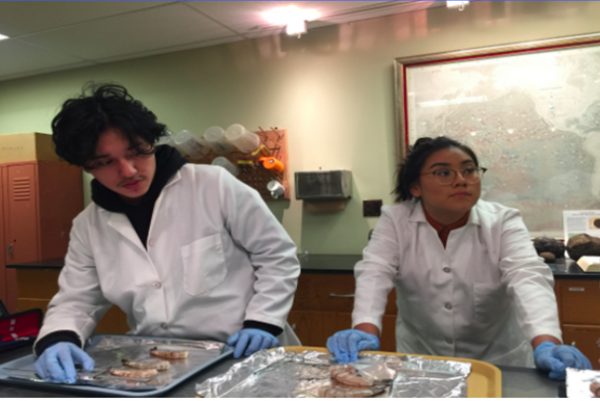 High School Students from Uncommon Charter Schools in Brooklyn conducting research at LDEO on shrimp imported from overseas, all of which contained microplastics. The feed being used in one fish farm was identified as a probable source for the high amount of microplastics in the shrimp. Microplastics are added to the food pellets to prevent them from sinking rapidly to the bottom of the farms. Photo courtesy Lamont-Doherty Earth Observatory.

And it’s not just plain plastic in these marine animals. A couple years ago, we had students look at organic compounds, like pesticides and pharmaceuticals, that can easily bind onto these tiny plastic particles through the sewer system and wastewater treatment. These particles are the perfect surface for hydrocarbons and pharmaceuticals to stick to. The students found that blood pressure medication was one of most prevalent pharmaceuticals that adhered onto microplastics in waters around New York City. This showed that microplastics act as vectors to carry other pollutants into the ecosystem. They get into the digestive systems of aquatic animals that we eat, but it’s too early to know for sure what, if any, repercussions this will have on human health

Can these tiny microplastic fibers make their way into our tap water? 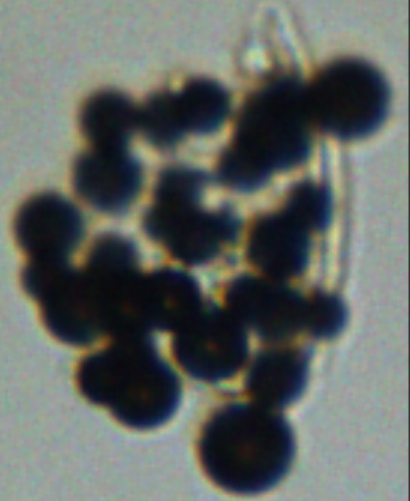 Microspherical plastic beads adhering to phytoplankton. Microplastic beads and fibers enter the food chain and water cycle from laundry and other sources. They are too small to be filtered out in wastewater or drinking water treatment. Photo courtesy Lamont-Doherty Earth Observatory.

What steps can we—ordinary laundry-doers—take to prevent wash-day microplastic pollution? Does my cozy fleece jacket have to go?

First, be mindful of, and minimize, the synthetic and synthetic-blend clothing you buy. Fleece, made from plastic bottles, is one of the worst microplastic-shedding offenders.

Space out your washing, delaying it as much as you can. Don’t wash that fleece unless it is really dirty.

Think about using an organic or natural detergent. In our tests, student researchers found that they contained much less microplastic than the popular mainstream brands.

Consider a lint-catching “ball” for the washer. Some of the fibers shed in the washing process stick to the ball. There are also filters for washing machines that trap lint from the wash water as it drains out.

And it’s time for us all to think about this: At some point, the amount of microplastics in the oceans will overtake the amount of plankton. Most aquatic animals that feed on plankton don’t discriminate as they filter ocean water. This won’t only affect these animals’ growth; it will eventually have an impact on the entire food chain.

It’s time to join the movement to ban single-use plastics. Let’s begin by banning single use plastics in all New York’s school cafeterias, as millions of pounds of these end up in landfills each day. 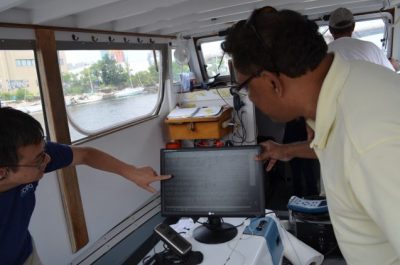