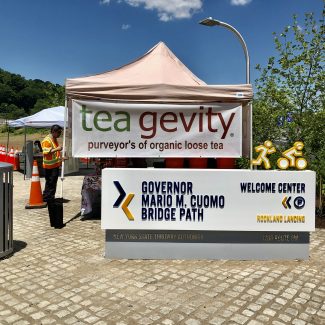 Frozen hibiscus pineapple teapopz anyone? Teagevity’s teaosk at Rockland Landing is the antidote to a long, unshaded summer walk or bike ride across the Governor Mario M. Cuomo Bridge.

The Teagevity oasis is easy to find if you drive and park at Rockland Landing, although the welcome center location in the spaghetti cloverleaf swirls of Thruway Exit 10 defies logic. Many villagers approach the bridge path from the Esposito trail off Clinton Ave., or from the stairs on Broadway near S. Nyack village hall, and it’s easy to miss Teagevity when coming from Nyack. But worry not. We’ll show you how to find this Nyack family-owned business coupled with great views southward to Nyack Heights, air-conditioned restrooms, and an intriguing sculpture. Teagevity is open Thursday through Sunday from 11a to dusk, as well as all holidays that fall on a Monday, weather permitting.

Rockland Landing was designed and built by the Thruway Authority. S. Nyack villagers voted for this design after complaints about an initial design that dumped the shared use path out on Broadway near Cornelison Ave. at a busy Thruway entrance. In the final design, the Thruway entrance was closed, the bridge path was integrated with the Esposito Trail, and a new Welcome Center with parking was built in the Thruway exit 10 cloverleaf.

Rockland Landing has space for 57 parking spots, an electric vehicle charging station, a bike repair station, and air-conditioned bathrooms in a sleek building. Along with Teagevity, between Westchester Burger and Graziella’s food trucks, there are 3 tables with umbrellas. Anchoring the beginning of the bridge path is Approach, a sculpture by Fitzhugh Karol that utilizes steel from both the old Tappan Zee and the new Governor Mario M. Cuomo bridges. 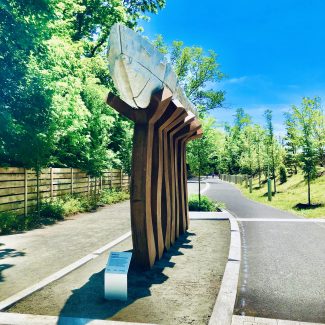 In the early 1980s, S. Nyack mayor Ray Esposito, frustrated by the lack of exercise space in the village, envisioned an exercise park using the old North Shore railroad line for walking, running, and biking. Esposito worked to obtain federal grants to cover the costs. The new park began at Cedar Hill Ave. at S. Nyack’s Franklin Park, the location of the old Nyack train station, and followed the former rail line to Grand View where it continues on to Sparkill. The Esposito Trail, named for him after his death, was a forerunner to the rails-to-trials movement in America. The Joseph C. Clarke trail in Sparkill is a more recent example.The new GMMCB path now runs beside the Esposito Trail from Clinton Ave, departing downhill just before the Esposito Trail crosses the Thruway. 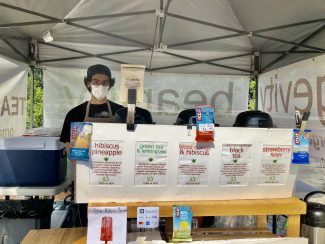 As they do at many local farmers’ markets, including the Nyack Farmers’ Market, Teagevity provides a path to wellness. Teagevity offers a wide variety of cold or hot herbal and traditional teas and BeanLuv coffee that is hand roasted and ground in Nyack. Teagevity creates its own custom tea blends. The most popular drink this summer is iced strawberry fields and hibiscus pineapple, 2 of Teagevity’s custom blends. New to the Teagevity lineup this summer are frozen Teapopzs and, soon, frozen cold brewed cofftini Popz. Coconut water, plain water, and nutritional bars are also available. 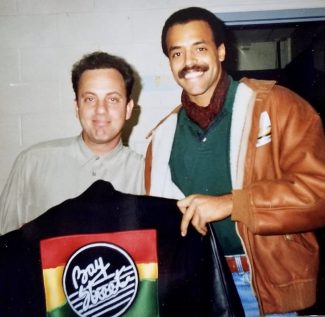 Preston Powell at his Bay Street club with Billy Joel.

Teagevity is a family-owned and family-run business located in Nyack. Headed by entrepreneur and renaissance man, Preston Powell II, the entire family contributes to the business. Preston’s spouse, Trang, son Alex, and daughter Jade share staffing of the Rockland Landing teaosk as well as working the markets in Nyack, Ramsey, Irvington, Pleasantville, and Ramsey.

Grandson of long-time New York congressional representative, Adam Clayton Powell, Preston started out as a club DJ in NYC in the 1980s and owned a music club in Sag Harbor before relocating to Nyack. Powell is also a fifth-degree black belt karate sensei who holds 2 classes a week at the American Legion center on Piermont Ave. Health and wellness all fit together in the Powell family.

How to get there 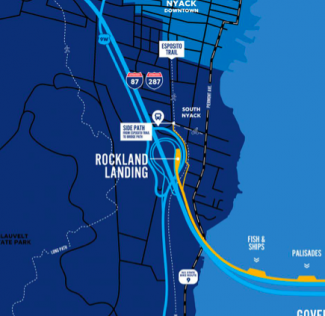 Rockland Landing, location of Teagevity & Welcome Center. The slim yellow line to the right of the cloverleaf is the “Nyack entrance” on the Esposito Trail. From GMMC Bridge Path brochure.

Unlike Westchester, Rockland Landing has more than one approach to the bridge path. From Nyack, the Esposito Trail meets the stairs from Broadway, heads downhill behind the S. Nyack village hall, and meets the blue painted bridge path. Turning left on the blue painted path takes you to the bridge. Turning right at the junction takes you to Rockland Landing and Teagevity. Once you pass the decorative mural on the Broadway tunnel, you have missed the turn. Heading west at the end of a hot summer walk, continue on the blue bridge path beyond the Y-junction with the Esposito Trail and you will be at Rockland Landing in minutes. 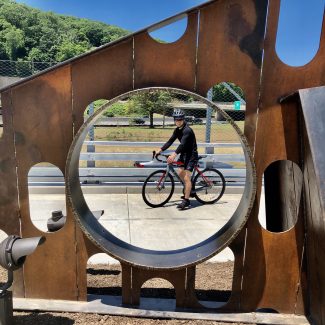 The setting for a cold or hot beverage from Teagevity is remarkably serene considering that just downhill is the bustle of Thruway traffic. Sitting at the highest point of the cloverleaf, wide open spaces leading up to the green hills of Nyack Heights, provides a dramatic backdrop to your sip of wellness.

Photos: Photos of Jade and Preston courtesy of Teagevity. Other photos by Mike Hays.