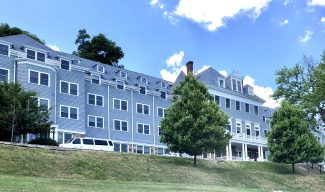 The purchase of 26 acres on Nyack Heights was a closely guarded secret, even the close associates of A. B. Simpson, founder of Christian and Missionary Alliance (CM&A), knew nothing about it. The sale, one of the largest of its time, was also a surprise to the village of S. Nyack until papers were signed on October 5, 1896. Simpson had a complete blueprint in mind to develop a home for the first Bible school in America that rivaled the popular summer evangelical resort at Ocean Grove on the Jersey shore. The beauty of the landscape and the proximity of transportation at the S. Nyack train station made it ideal for a growing organization. In 1972, 76 years later, the institution that Simpson founded on Nyack Heights was named Nyack College. 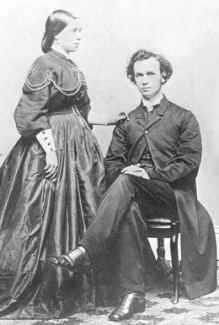 A. B. and Margaret Simpson. Courtesy of the Nyack Library.

Alfred Benjamin Simpson, born December 15, 1843, was a man with a vision of bringing “the Bible to the world” by energizing and training missionaries. His unique vision built an evangelical organization without making it a religious denomination that was open to all. His openness to all denominations combined with a musical voice and natural manner, made him the top religious fund-raiser of the Gilded Age.

Born on Prince Edward Island, Canada, Simpson felt the call to preach at an early age. In 1865, the week after he graduated from Knox College in Toronto, he became a pastor in Hamilton, Ontario, and married his lifelong partner, Margaret. In 1873, Simpson became minister of a Presbyterian Church in Louisville where he first conceived of the idea of preaching the gospel to the common man.

At the age of 36, he took the pulpit at the W. 13th Street Presbyterian Church in NYC in a large Greek Revival building that still stands now serving as an apartment building. Simpson began to evangelize to the spiritually underserved, poor immigrants with some 2,000 people attending his Sunday evening services. He published the first illustrated missionary magazine in America in 1880, then two-years later started the Alliance Weekly. His skills as a writer complemented his skills as an orator. He was the author of 110 books and composed and wrote the lyrics for 100 hymns.

The imbalance between preaching to the comfortable NYC society of Presbyterians and the immigrants who were not allowed in the 13th St. church, was untenable. Simpson struck out on his own and began holding services at Caledonian Hall, a dance hall on 8th Ave. and 13th St. and working to build a school for missionaries.

Founding of the Missionary Training Institute 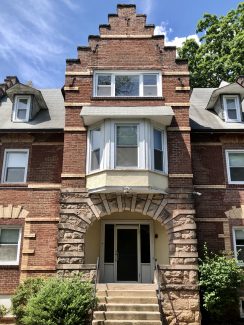 By 1897, the school was jammed with students. 50 students lived in the college and 150 in Berachah Home. Building a larger college was prohibitively expensive in NYC and the search was on for a new location. It’s unknown exactly how he found the properties on Nyack Heights but perhaps he had previously met Ross Taylor, a Nyack minister with interest in missionary work with property for sale.

The Nyack Heights Neighborhood in 1896 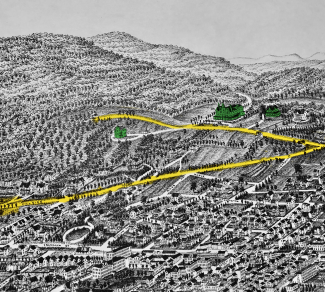 Nyack Heights had only a few buildings in Burleigh’s 1884 schematic of Nyack . Hillside Ave is shown as a yellow diagonal line from mid-right to lower left. This is approximately where the Thruway is located. Highland Ave in yellow intersects on the right with Hillside. The large structure in green is the Prospect House and to its right the S.R. Bradley estate. The building in green in the center is Ross Taylor’s home probably before a fire. The Woerz property and later Simpson Hall would be above that. The S. Nyack train station is just to the left of this detail near Hillside.

Nyack Heights, known as a geographical division of S. Nyack at the time, was aptly named. At its highest point of some 440 feet, it was the highest point in the Nyacks. With fewer trees than now, the panorama took in the entirety of the Nyack, Tarrytown, Ossining, Hook Mt., and the Hudson River. In 1896, Nyack Heights was sparsely populated with the exception of several large estates and a hotel. 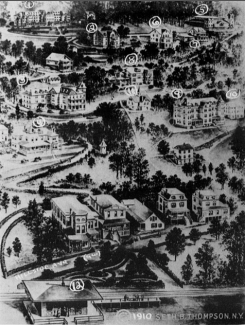 Simpson was able to buy two adjacent estates owned by Ross Taylor and E. G. W. Woerz along with a separate property for his own home. Woerz was a wealthy partner of the largest beer manufacturer in NYC, Beadleston & Woerz Empire Brewery, located in the old penitentiary on 10th St. He owned many properties in the Nyacks. He built a large, stone estate house, known as the Cliffs, near what is now South Blvd. on 14-acres that stretched up to the stone cliff of South Mt. The Cliffs, renamed Harmony Hall, was first planned to be an orphanage.

Just below the Woerz estates, Simpson purchased the 12-acre Ross Taylor property.  Taylor, a minister and the son of a bishop of the Methodist Church, promoted missionary work in Africa, and published a newsletter and many books like the Women’s Missionary Friend. In 1884 a large stone house was built to replace Taylor’s first house that was destroyed in a tragic fire that killed four of his children. The house now named Berachah Home was expanded to accommodate 100 guests. Later the building, whose name “Berachah” means “house of blessing” in Hebrew became a place where divine healing was practiced and eventually the building became Berachah Hall of Music for music studies.  Berachah Hall burned in 1986, shortly after the college purchased its lease from C&MA. The renovated structure is now a private residence. 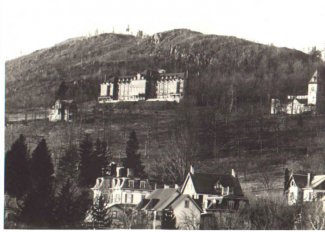 In November of 1896, MTI acquired an additional 12 adjoining acres bringing their initial property holdings to 38 acres. The Rockland County Journal, the local newspaper, was ecstatic about the benefits of the new owner, “Not only will the property purchased by the Alliance be greatly improved but all adjoining land with be greatly enhanced in value.”

Two new buildings were quickly erected: a large summer tabernacle was built on the upper grounds with seating for 1,500- 2,000 (now the site of Pardington Hall) and what was to become Simpson Hall. 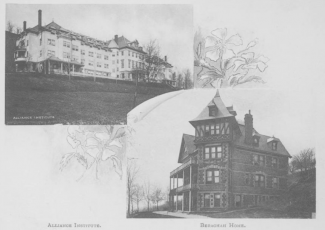 1910 views of Simpson Hall and Berachah Home. Courtesy of the Nyack Library.

On April 24, 1897, the cornerstone for a new college building was laid. For the occasion, two special trains of 7 and 4 coaches, respectively, were engaged by A.B. Simpson to bring around 800 members from the city.  The group, led by Simpson’s son George, marched up the hill from the S. Nyack village green singing “Let Us Walk in the Light.” It was quite an uphill walk. During the ceremony Simpson discussed his vision of a missionary school for men and women in this citadel of rocks. He unfurled the Alliance banner of blue, crimson, and purple.

Simpson Hall was completed in 1898 as one of the largest wooden Victorian structures in the Hudson Valley. It housed 250 students; men and women were separated on the first floor by a kitchen and library, a chapel on the second floor, and classrooms on the floors above. The college enforced strict social divisions. Dating was not permitted until the 1940s and even then, only on afternoons and three specific nights a week.

Simpson Hall has remained the mainstay of the college. Little did A. B. Simpson realize how long his college would last. By 1959, the building was no longer up to code and declared unfit for residency by the Village of S. Nyack. The building had little use until 1981 when it was completely gutted to make many changes to bring it up to code. 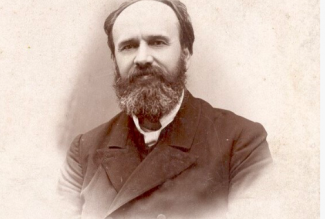 Simpson was an adept fund raiser. His success at fundraising is one reason why the college got off to a great start on new grounds and with a new building. In 1896, Simpson raised over $100K in Old Orchard, ME, an evangelical summer encampment that he started ten years earlier, and a record-breaking $125,000 at Carnegie Hall the next year. At Old Orchard people donated jewelry and watches and in one case, a grand piano.

Simpson’s speeches combined evangelism with his mission to save the poor worldwide. The message hit home. He welcomed members from any religious denomination. Even is daughter Margaret joined the Salvation Army in NYC in 1899 with her father’s blessing. “I am liberal in my views and do not believe there is no other form of religion than that of the Christian Alliance.” 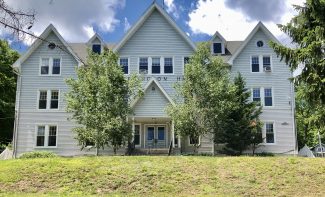 Simpson’s last major fundraising effort produced another building with classrooms, a large chapel, and administrative offices. Pardington Hall dedicated on March 25, 1913, was named after George Pardington, a long-term MTI teacher who overcame many obstacles not the least of which was becoming disabled due to a teacher’s abuse when he was 10. His wife also taught at the college. Chapel attendance in Pardington Hall was mandatory for students with an invisible line down the auditorium dividing the sexes. Married couples were seated in the middle

Pardington Hall was damaged by a fire in 1971 and renovated. It then became the Nyack College School of Music with a 505-seat auditorium named the Olson Auditorium after the college’s long-time music director, Dee Olson. The student radio station WNYK was also located in the hall. 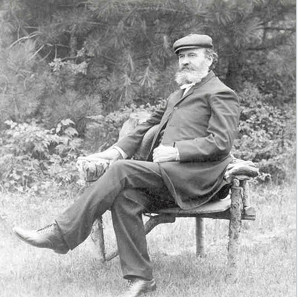 A. B. Simpson at MTI. Courtesy of the Nyack Library.

The Spanish flu pandemic’s second wave hit Nyack in October, 1918 as it did elsewhere in the US. A committee comprising the Boards of Health of the three Nyacks went looking for an emergency hospital but were rejected at all sites but one. Dr. Simpson responded quickly to the committee’s request offering a bungalow on the MTI campus. The bungalow had rooms on one floor and was outfitted with beds and other necessary accessories. The committee voted Simpson a special thanks, while they also noted that they were “sanguine that present stringent methods would soon prevail over the disease.”

The End of an Era 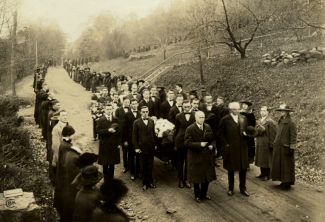 Dr. A. B. Simpson passed away on October 29, 1919 marking the end of an era at MTI. More than 200 students lined the streets as his casket was borne to the Gospel Tabernacle in NYC. His wife, Margaret, who served as financial secretary and secretary of missionary appointments and equipment, died in 1924. They are both buried on the Nyack campus on a site between Simpson and Pardington Halls.

Simpson’s motto, “the whole bible to the whole wide world” was achieved in a few short years. Missionaries trained at the college were working in many countries in Asia, the Middle East, and Africa.  With the loss of their founder the school would face new challenges in the post-WWI era.