If there was a Truth In Advertising Law for state parks, the beautiful public space on the Hudson River at the end of N. Broadway would be called Nyack Beach-less State Park. If you have strolled or cycled north along the river from Nyack Beach State Park, it’s hard to imagine the busy park located along the path hosting a tennis courts, baseball diamonds, a stone walled cafeteria, a small lighthouse, an amusement park with a carousel, bumper cars, a dance hall, and a large swimming beach. Like Nyack Beach, Hook Mountain Park was once a large quarry–and before that, the dock for the Knickerbocker Ice Company.

It was once a popular public beach, but today Hook Mountain Beach is mostly rocks.

Hook Mountain Beach bears almost no resemblance today to its former use as a quarry. In the early 20th century, the Palisades Interstate Park Commission acquired 3 quarries from Upper Nyack to Haverstraw, creating a riverfront park. Hook Mountain Park was developed from the old Rockland Landing quarry. The area is overgrown now but a few foundations and abandoned stone buildings reward a diligent search. Several plateaus that were once open above the beach are overgrown but one can easily imagine the shouts of families enjoying themselves on a hot summer day. 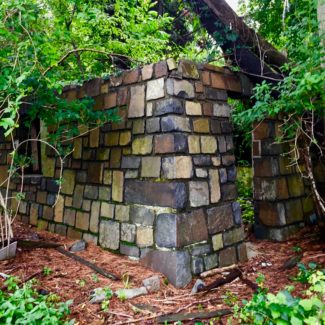 The beach park was located at the end of the current riverside footpath from Nyack Beach at the 1-1/4 mile mark where it intersects with a paved road coming down from Rockland Lake; locals will know it as the place with picnic tables on a wooded point of land jutting into the river just before the path starts an uphill climb. Just north of this point, foundations and old pier posts in the river can be found. Both the quarries and the Rockland Lake Ice Company used piers here to ship goods to New York City. There is a small warning light on a pile of rocks in the river that is still visible. It was once a small lighthouse. Because of the curve of the river around Hook Mountain, a river traveler sees neither Nyack nor Haverstraw from this point.

When did swimming in the Hudson stop being a thing? 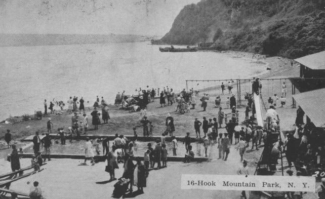 Hook Mountain Beach in the mid-1930s looking south. Note the wading pool in the foreground and in the distance a beach with swimmers.

Industrial and population growth in the 1950s brought more river pollution of every kind. With mixed results, parents warned their kids out of the river, where they had been swimming forever — at the Hook, at the Bight, from backyards, parks, docks and rowboats. READ MORE about  the sad history of lost swimming and fishing holes on the river at Swimming Lessons: on The Hudson River, part of the weekly Earth Matters series on Nyack News And Views.

The beach had a large amusement park complete with a bathhouse, a wading pool, a carousel, a hand-turned merry-go-round, swing sets, bumper cars, dance pavilion, and, of course, beaches. The north and south beaches were segregated. 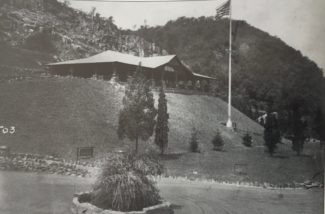 The cafeteria/hotel at the top of the beach in 1925. Notice that the hillside above it is treeless from the quarrying operations. Courtesy the Nyack Library.

Park access was predominately from NYC dayliners like the Clermont, Alexander Hamilton, Robert Fulton, Peter Stuyvesant, and the City of Keansburg.  The beach park was closed in 1942 because of WWII. It was destroyed by a hurricane in the late 1940s, never to return. 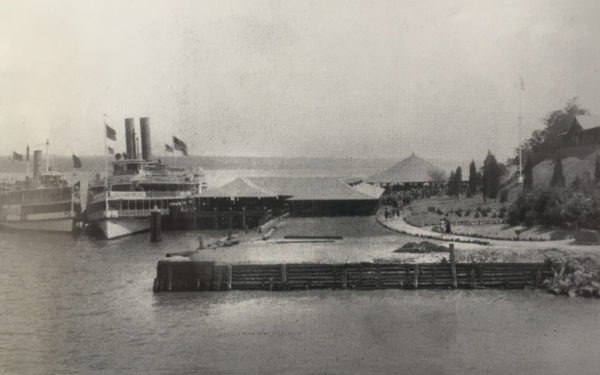 Dayliner steamships from NYC docked at the beach, mid 1920s. The carousel can be seen in the background. Courtesy of Nyack Library. 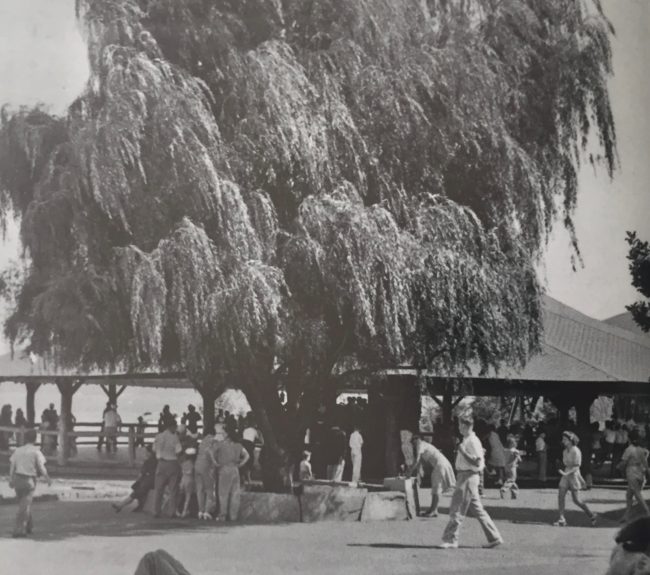 The dance pavilion at Hook Mountain Beach in the 1940s. Courtesy of Nyack Library. 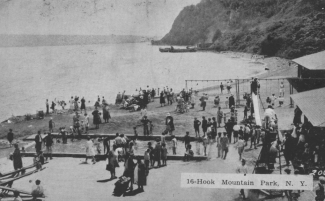 The beach at Hook Mountain Park crowded with swimmers in the 1930s. Courtesy of Nyack Library.