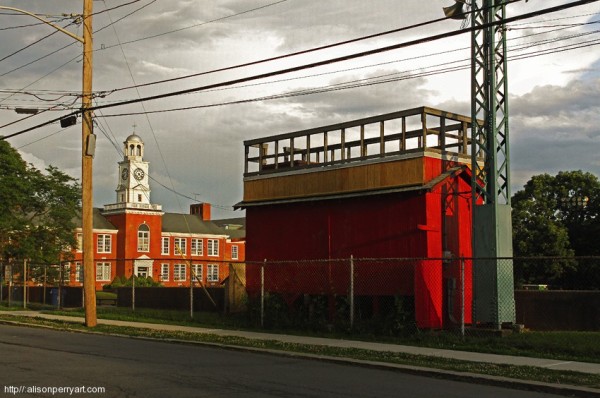 Local Pride Has Nothing to Do with Insensitive Team Name

I believe the pride we have for our community, our high school, our teams, and for each other is organic to our town. It’s not the product or essence of a culturally appropriated ethnic symbol with which we have no real actual relationship.

But Nyack pride lives on nonetheless. For my entire life, I have felt pride in my hometown, and rarely overlook the opportunity to tell others about it. But it occurs to me that I have never said that I am/was a Nyack Indian.

I never even thought about it. That is, it was never a conscious omission.

But the truth is that the use of this racial representation doesn’t reveal the first thing about our town or the people from Nyack, and Nyack’s evolution during the past century.

I always liked the art, especially on our ice hockey uniforms, of the perfectly grim faced Indian brave and ready to wage war against our opponents. Honestly, wearing the jersey made me feel bad-ass.

Back then, in the 1960s and ’70s, as conscious as most of us were of racial prejudice, discrimination, and stereotyping, I myself, at least, never thought of the Nyack Indian mascot in the same context.

But my perspective now, and for a long time, is that, given actual history, our team mascot is an insulting racial stereotype. As for those of us who came up in the Nyack school system, the indigenous culture is (or, at least, was) not taught in school. In fact, I recall that very little time was spent educating students on the story of the colonization of the continent and the genocide of Native Americans that was the key to white manifest destiny.

Generally, it goes largely unacknowledged as one of the most horrific realities of this country’s history.

It was the policy of the U.S. government and governments in the territories to wipe out as many Native Americans as possible and push the survivors from their lands, forcing them to live in camps called reservations.

That is the real legacy of the white relationship with native Americans. White men didn’t admire them as brave and noble. The modern romanticism is a false contrivance. To those who would cite a random example of a mutually beneficial relationship between them, allow me to recall the colonist’s thanksgiving gifts to the Indians of winter blankets laden with small pox.

Today, by not acknowledging the actual blood-soaked reality, we protect our collective conscience by dismissing the horrific truth of the birth of our nation. Replacing the team mascot is far from “erasing history.” What it is: replacing myth with reality, and hopefully encouraging lesson planners in our schools to teach a healthy dose of the truth.

It offends many of indigenous heritage to use their ethnic background as a team mascot. It does not honor them. It ironically seizes the darkest time in their history and glorifies it as something it was not. In that way, comparisons to the “Fighting Irish,” etc are largely irrelevant.

Some would suggest it doesn’t matter what white people think, that outrage or opposition by Native Americans is enough to cause a change. Wrong. It matters immensely what white people think.  That’s part of the problem. Repressing the truth of history is a major factor in the miscalculation of those who say we need to “keep the Indian.”

Nyack doesn’t own the Indian.

I believe it is time to set him free.

Sign the petition to change the name of Nyack schools’ team name here.