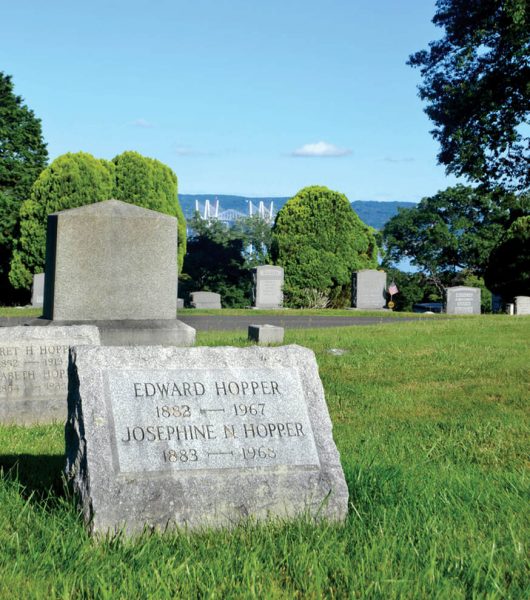 To speak of shadow is to speak of light. This month, it was not just Edward’s birthday, but his wedding anniversary with Josephine Hopper (Jo). Married on July 9th, 1924, the couple remained together for 43 years until Hopper’s death in 1967. Jo passed shortly after on March 6th, 1968. It’s clear Jo was integral to Edward’s development as an artist, serving as his lifelong travel companion, partner, advocate, model, and teacher.

In Hopper’s final painting, “Two Comedians,” created in 1966, Hopper dramatizes their union. The painting seems to emote on the end of life, and in turn the end of their life together. While Jo starred in nearly all of Hopper’s later works as his model, his subject, she had once wanted to be an actress. This was perhaps the role of her lifetime.

As I study “Two Comedians,” I recognize the familiar gesture of the performers taking a bow, each directing the applause to the other. Still, I feel a hesitancy as the woman subject, Jo, nears the stage for her bow. The man, Edward, holds her hand, leading Jo forward towards the audience, but her palm remains open, pointed as if to return the gaze back to him. The real star. While encouraging Jo forward, Edward holds his hand on his chest, affirming the attention.

In his sketches for the painting, other compositions were tested before settling on this one. Many depict a similar dynamic of coaxing Jo along to take her turn, such as the sketch of Edward “leaping on stage while Jo climbed on to join him.” In a rare interview on his process, Hopper said: “I have tried to present my sensations in what is the most congenial and impressive form possible to me. The technical obstacles of painting perhaps dictate this form. It derives also from the limitations of personality, and such may be the simplifications that I have attempted.” With this final painting, Edward acknowledged the sacrifices of Jo’s life, that her struggle for visibility was not entirely invisible to him.

The scene also reminds me of “Soir Bleu,” in particular the clown at the table and the rouge on the cheeks of the sex worker next to him, which looks similar to Jo’s makeup in “Two Comedians.” Dr. Rick Brettell, a professor of Aesthetic Studies at the University of Texas, finds “Soir Bleu” to be Hopper’s most ambitious work, and one that stands out in style. “No one is like anybody else. Everybody is separated from everybody else. Hopper kind of translates it into an everyman setting, in which most of the people in it, are part of a kind of world of alienated urban entertainment, in which one is always searching for a meaning somewhere else.”

Pre-pandemic, my editor for these essays mentioned “Soir Bleu” to me as one he found to be odd as well, something other than anything else Hopper painted. Though the timeline doesn’t work out, the conspiratorial part of me hoped: Wouldn’t it be wild if Jo had authored the painting all along? That it had been their little gag?

In the Whitney’s archives of Jo’s letters from 1933-64, there’s a September 22, 1956 letter to Dr. Vincent. In the letter, Jo writes that she’d like to go to wherever Dr. Vincent is “at least a little while so as to see if E. Hopper finds that country good hunting ground for him–and I want to paint my (pitifully female, elas) version of that canyon…” I sigh at pitifully female, thinking again of the trepidation of the woman stepping on stage.

Art Gunther, retired editor of the editorial pages, columnist, and staff photographer of the original Journal-News in Rockland County, and current volunteer with EHH, shared with me that “when Hopper died, at the newspaper, we really just had a small obituary for him. Even the Times, which had had a prepackaged, pre-written obituary, it wasn’t on the front page. At that time, there were only six people at Hopper’s funeral at Oak Hill. The reason: the Hoppers didn’t have a wide art circle, and Hopper was out of place as a Realist painter in this Abstract Expressionist time. It would take fifteen years after his death before he was rediscovered.” Now, in the summer of 2020, much longer after Edward’s rediscovery, we will hold an art show in Jo’s honor.

In Levin’s biography of Hopper, she writes of their marriage, and of “Two Comedians” in particular. “He allows her the recognition she had long sought, casting her as his partner, sharing the spotlight and the honor on the stage after a well-executed performance. The linked actors face the end together.”

At Jo’s request, Rev. Arthayer Sanborn, minister of the local Baptist church presided at Edward Hopper’s funeral, which was invitation only. Marion, Edward, and Jo now rest in a family plot at Oak Hill Cemetery, joining fellow Nyack artists Helen Hayes and Charles Prevost MacArthur, Joseph Cornell, and Carson McCullers, perhaps one of the clearest views Nyack has to offer of the river.