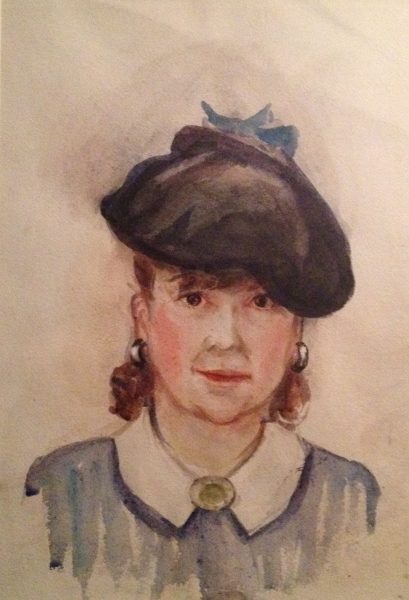 “I like the reclaimed horse car–or house made out of ex-moving van. Something with a smack of adventure about it,” Gail Levin reports from Jo’s journals in Edward Hopper: An Intimate Biography. “In the end Jo grew discouraged… her report reveals the same kind of conflict that drove and infected their marriage and unequal careers.” Quoting Jo: “If I’m happy ever and not too exhausted, I might want to paint.”

Jo and Hopper met in 1923 in Gloucester, MA at an artist colony where Jo taught Hopper how to use watercolors. They spent the summer painting, sharing subjects and techniques. At the time, Jo’s work was described as bold and abstract. I think of Robert Henri’s portrait of Jo from decades before, when she was 22 and studying at the same art school Hopper attended, called “The Art Student.” In the portrait, Jo grips her paintbrushes with stern ease, ready to work.


During that 1923 summer, Hopper painted one of his first known pictures of Jo during this time as she sat on the beach deep at work on a watercolor of her own. Upon their return to New York, Jo suggested Hopper’s work for the Brooklyn Museum and they bought one of his watercolors. After, he sold many more watercolors. More than Jo. She stood by, watching, waiting for her own success.

A year later, they married. Jo was 41. Only four years prior could she vote for the first time. Before meeting, Jo’s paintings were shown alongside Picasso and Man Ray while Hopper had only sold 1 painting of his own. Inside their marriage, Jo often felt lonely. There was abuse.

A few of Jo’s watercolors remain, 1 of which is the attached self portrait. I study the painting and think of her paintings that have been lost and how the woman in the frame will become the subject inside of Hopper’s. There is a lightness of color with which Jo paints herself, what feels like a fiercely gripped femininity. Perhaps a property of watercolor paint itself, Jo’s colors feel bright yet somewhat worn, almost as though they are disappearing before our eyes. As though she is slipping away.