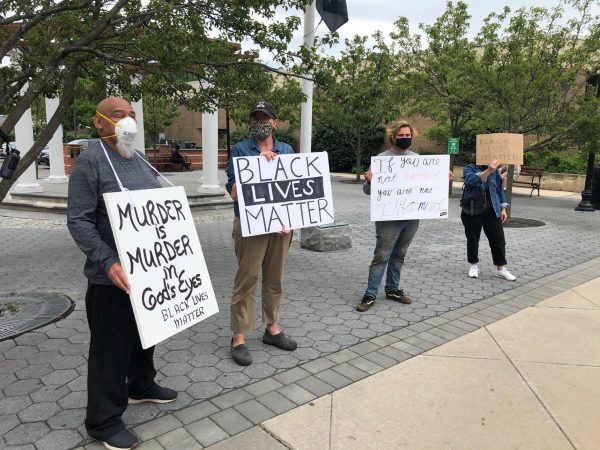 Every day since Saturday, May 30th, demonstrators have been gathering in downtown Nyack to mourn the death of George Floyd and protest police brutality and white supremacy. The daily demonstrations have varied in tactic and scope—on Monday, there were thousands, on Wednesday just a handful—but the message has remained consistent: Black Lives Matter. Joining in a nationwide movement to force the issues of systemic racism and state-sponsored violence to the forefront of the American conscience, some Nyack residents have vowed to continue demonstrating every day. To many, this reckoning has felt much more significant and urgent than its recent predecessors, partly because of how most social media feeds have become laser-focused on this single issue, but also because of a sustained commitment to the cause on the local level, and the remarkable prevalence of protests in smaller cities and towns across the country—like the ones taking place in downtown Nyack.

The first person to begin protesting at Main Street’s Veterans Park was Andy Minniefield, a Black Nyack native and longtime activist who, for several hours on the morning of Saturday, May 30, was the sole protester standing in Veteran’s Park. “I felt that I had to join in,” Minniefield said. “I didn’t see anybody else out there with a sign in Nyack…  and, you know, just the one person out there standing is better than nobody at all.”

Minniefield’s one-man demonstration proved an effective rallying cry. One by one, locals began to join him.  “It was really incredible,” he said. ”I’m standing out there with my picket sign and a young lady came by and liked the idea of me standing out there, and she chose to join. It warmed my heart.”

“It just sort of happened,” said the young lady, Kris Burns—who many Nyack residents will know as the proprietor of the former Main Street flower shop, Festoon. When Burns returned to the park to join Minniefield’s demonstration, a few more people had trickled in, signs in hand. In her telling, it was very informal— “There was one, then two, then three people”—but the number of protesters quickly grew as the afternoon went on, testifying to the impact of individuals. By the time the Nyack Center’s Teen Youth Group arrived in the park later that day, a small crowd had formed. The next thing Minniefield knew, “We had 50-60 people out there.”

The leaders of the youth group soon coordinated a traffic block, leading their peers to take a seat in the middle of Main Street in 5 minute intervals. “I was so impressed by the kids. It was an amazing display of civil disobedience,” Burns said of the youth-led initiative to disrupt the rhythm of downtown activity and force people to pay attention. During the intermittent blockades, the teenagers would sit down on the pavement and face the cars ahead, chanting, raising signs, and eliciting honks of solidarity from the row of stopped cars. When five minutes had gone by, they’d let the traffic pass before resuming post and re-clogging the streets.

Minniefield was excited to see how much passion and manpower the Nyack Center youth group brought to that first demonstration last Saturday, and urged them to remain committed to the movement. “I’ve had to struggle as a black man all my life with law enforcement,” he said. “In Nyack, and all over this county. But you have to stand up. It’s never been a problem for me, grabbing a sign and standing on a street corner and telling people what I don’t like. Right now, the youth has to take hold of this movement, cause their lives are on the line.”

Marcus Alexandre, one of the leaders of the Nyack Center youth group who helped to coordinate the traffic blockade, is committed to rallying his fellow teenagers to keep showing up, and taking direct action. “The youth need to get active in these matters,” Alexandre said. “This is our future. It’s time to hear what the young people have to say. We shouldn’t, and will no longer, hold back. We will demand change for not just us but those around the country who face the same struggles as we do.”

As for those who seek to be allies? “What they need from me is my body and my privilege,” Burns said. “And so that’s what I’ve got to give. We need to keep showing up, but it’s not our place to cause disturbances. We need to listen and learn from black demonstrators and follow their lead, give them the mic, always.”

On Sunday, too, protesters gathered in Veteran’s Park, another informal event that had been shared around Facebook the evening prior. This time, there were already around 50 people by the time Burns showed up. The vast majority of them were white, both Burns and Minniefield told me, which felt to them an important and necessary display of solidarity.

The numbers waned and waxed throughout the day, but the gathering felt powerful all the same, Burns said. William Floyd, a Spring Valley resident and the cousin of the late George Floyd, gave a powerful speech, urging the crowd to keep fighting, to stay loud, to practice kindness and love. In moments when the crowd was bigger, Black protesters led a series of chants, a long list of call-and-responses, a painfully extensive role call of just some of the many Black americans who have been murdered at the hands of the police (George Floyd, Breonna Taylor, Tony McDade, Ahmaud Arbery, Eric Garner, Trayvon Martin, Sandra Bland, Michael Brown, Tamir Rice, Alton Sterling, Philando Castile… the list goes on).

Later on, the crowd got smaller, dwindling to just a handful of people. “It’s hard when it’s small, because you feel more exposed,” Burns said. “But I think in a weird way, it’s even more powerful. You’re sitting out there and you’re bearing witness.”

With measured hope, Burns and Minniefield maintain that something about this moment feels different–and in part, that’s because of people like them rising up throughout the country. Hyper-local, highly devoted demonstrators, from across color lines. Rarely has a social justice movement seen such sustained, intense dedication on the local level, as amateur organizers across the country work hard to ensure change happens.

“The thing about this group is it’s not run by seasoned people,” Burns said. “They are showing up and figuring it out. It’s people showing up not having ever done a chant before, not knowing how to lead people in chants. But doing it. It was beautiful.”

If you’re interested in participating in the ongoing demonstrations in support of Black Lives matter, you can find Andy, Kris, and a handful of others out at Veteran’s park in downtown Nyack, every afternoon.

Sasha Cohen is a recent graduate of Wesleyan University and a Nyack resident.