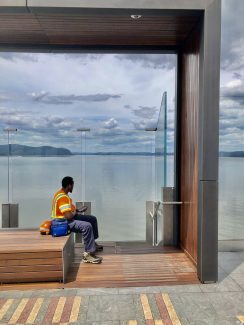 Like eating ice cream too fast, Nyack’s (and the Hudson River Valley’s) shared user path, the Gov. Mario Cuomo Bridge (MCB) Path, delivers a delicious sensory jolt. The 3.6 mile blue-painted shared-user path, the longest of its kind in America, is a magic carpet ride through locally created sculptures, a tunnel with murals, local food trucks, and 6 custom-designed belvederes for viewing the expanse of the Hudson River.

The path is a narrow 12 feet wide, with bikers restricted to the automobile side and walkers to the river side. Staying in one’s lane and social distancing will be challenges as everything seems to be during the pandemic. Would anyone have guessed when the path was designed back in 2013 that there would be so much desire for the outdoors? And where better to be outdoors than above the Hudson, where the weather and the river change by the minute. It’s our very own Walkway Over the Hudson.

Was it worth the wait? You betcha’! It fills so many vital present needs: 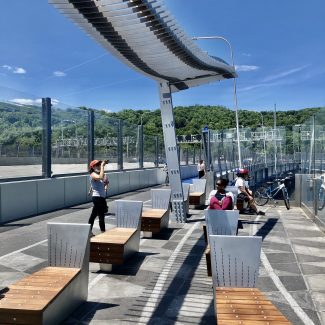 A Brief History of Bike Paths

The idea of dedicated bike paths goes back to the first major cycling trend in the late 19th century when the safety bike, a bike much like what we ride today, was invented to replace the awkward and dangerous penny farthing bike (the one with a huge front wheel). Cycling was an overnight hit. Suddenly women could participate in a sporting activity. Women’s style of dress changed as a result. Bloomers came into style. Men and women were suddenly athletic equals, and men and women cycled together in swarms during Gilded Age America. 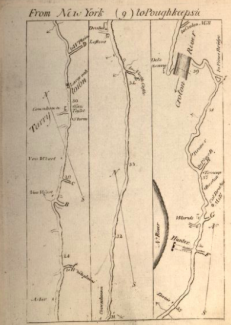 One of the first road maps designed for cyclists, New York City to Poughkeepsie.

Then, as now, dedicated paths for cyclists were wanting. Horses and wagons ruled the roads. Pedestrians held sway on sidewalks. Roads within and between towns were lightly paved and mapped routes were rare. Paper road maps were created as a way for cyclists to find routes. Bike clubs formed in every major town in America. Even the Roosevelts and Rockefellers belonged to an exclusive NYC club called the Michaux Group, which had an uptown clubhouse. Group rides were common. Cyclists were known to  head up from New York City through Westchester, take the ferry to Nyack, and then perhaps cycle up to Rockland Lake.

Edward Hopper bought a fancy road bike as a 15-year-old and rode all over Nyack and Rockland County by himself and with friends, as evidenced by numerous slice-of-life cycling sketches made before he was 18. Mediation: Ten Miles from Home, signed and dated 1899, is classic Hopper. A young man–clearly a self-portrait–gazes at his bike with a flat tire. Hopper’s original bike is on display at The Edward Hopper House & Museum in Nyack. 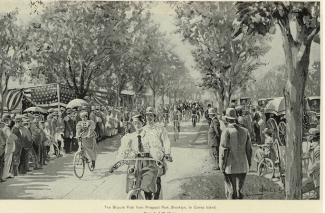 For a long time, there was a strong push for bike paths, or side paths as they were then called in New York City. Bikes were first allowed in city parks but they shared the paths and roadways with pedestrians and horses. In 1885, bikes were first allowed in Prospect Park and Coney Island 24/7 from March through November, and then 10-7 in the offseason. Clubs like the Long Island Wheelman, Brooklyn Bicycling Club, and Bedford Cycling Club worked with the Parks Department to establish a loose set of rules. For a time, cyclists had to register and wear a badge. One requirement was that riders carry a lighted lamp with a white light after dark. Chinese lanterns were specifically prohibited for some reason. 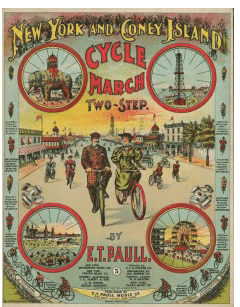 Cover for a song about the Coney Island Bike Path.

Some of the construction costs were contributed by subscriptions paid by cyclists. In 1894, the country’s first bike path was built on Ocean Parkway. Some 60 bike clubs attended the opening. Speeds were limited to 12mph on bike paths and 10mph on the parkway itself. The 5 ½-mile Coney Island Cycle Path from Prospect Park to Coney Island opened the same year with a 14-foot wide lane (soon widened to 19-feet) of crushed limestone. It was the first path devoted exclusively to cyclists separated from pedestrians, horses, and wagons. Two years later, a return path was built. The grand opening was attended by 10,000 cyclists. Authorities were happy to get cyclists off the roads. Then, as now, fast riders (called “Scorchers”) gave cyclists a bad name. Some were ticketed by police.

Of course, everything changed with the automobile. America’s love affair with bikes shifted to cars and a combative relationship between the two has existed wherever they share the road. The first recorded collision between a cyclist and car occurred on May 30, 1896 when Harry Wells was racing his Duryea car hit Evelyn Thomas who was riding a Columbia bike at 74th and Broadway. Evelyn broke a leg.

We need your help – NOW – to continue this work. Please consider making a one time or sustaining donation to Nyack News And Views. Thank You! 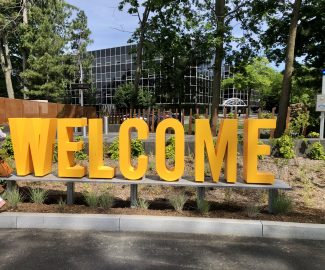 The beautiful stretch of River Road between Nyack and Piermont was a busy place in 1900. On Sundays, horse races took place. Pedestrians and cyclists had a hard time avoiding horses and spectators. Local Nyack store owner, Isaac Neisner, started a drive to fund a side path for cycling. A commission was formed to sell subscriptions from bicycle license fees. It never seemed to get off the ground. We would appreciate a cycling side path to separate cars and cyclists today. 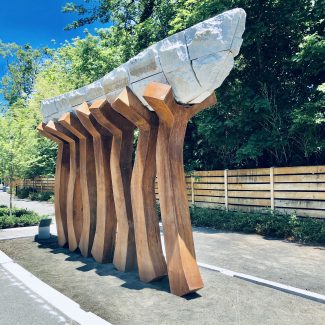 In the late 1980s, Rails-to-Trails Conservancy started a national advocacy program for turning unused rail lines into biking and walking paths. The creation of paths was done entirely by local groups that felt the need for recreation. In most cases, neighbors were against the conversion of unused land into public pathways. Fears of litter and robbery were common, though we’ve since learned that such fears are unfounded and that the value of real estate increases along paved bike paths. Some 8,000 miles of rail trails have been built throughout the country since 1987.

Nyack was ahead of the curve thanks to the vision of former S. Nyack mayor Ray Esposito, who was appalled at the lack of public parks in the village. He took the lead in converting the unused Northern Railroad/Erie line to a jogging and exercise path that eventually extended through Grand View, Piermont, and Sparkill. We are fortunate to have such a rescued rail park, though, since it was an early adopter, the route remains unpaved and narrow, a challenge for social distancing. 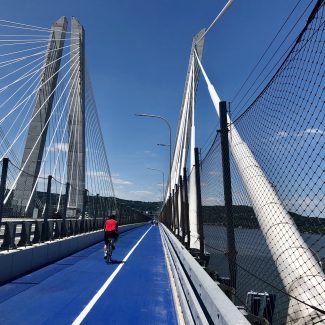 MCB path near the eastern pillars.

The finished 3.6-mile bike path is unique to America. The path can be accessed from either side. From Nyack, there are 2 approaches, from the Rockland Landing Welcome Station located in the cloverleaf (off 9W north) or from the Esposito Trail starting at the corner of Franklin and Clinton Aves. Walkers can also access the bridge path via stairs on S. Broadway near Village Hall. It is a smooth downhill from Nyack to the actual bridge. Of note is the attractive mural-painted tunnel beneath Broadway. Once on the bridge, a long 1% uphill grade leads to the towers. The custom-designed belvederes are great places to stop. For walkers, they are a good place to pause and then return.

Sculptures made by local artists are located at the Rockland Landing parking lot and at the entrance on Clinton Ave. Near the Tarrytown landing there are several sculptures, including 2 with a bike-rack theme. 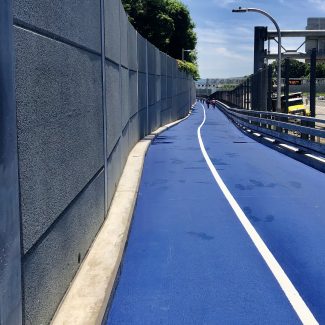 View of the beginning of the trail from Rockland Landing to the bridge.

It’s going to be busy. The MCB Path is open 6a-10p. One-way walk time is estimated to be 80 minutes; bike time is 20 minutes with a speed limit of 15. Masks should be worn, especially at the belvederes. Dogs are not allowed. Bridge weather can vary from shore weather. It can be cooler and windier. There is no shade or water stop between the landings.

The bike path is separated from car traffic by a barrier topped with sound reduction plastic at the belvederes and metal fencing elsewhere. A bus lane separates the barrier from the car lanes, minimizing noise and motion.

At last, the bridge path is done. In the words of Etta James, our “lonely days are over… I found a dream I could speak to.” It’s a game changer for the Nyacks. Every villager can customize their bridge path experience.