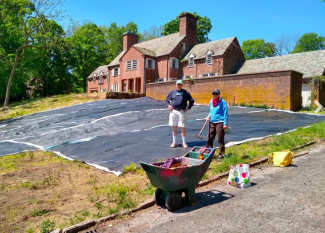 Alison Crowther and John Colgan putting the tarps down at the Natural Meadow Restoration Pilot. The Haring Estate home is in the background.

Just as spring weather turned nice this year and villagers headed outside for some exercise and escape from lockdown, all but one of the local parks closed. River Hook, the Hester Haring Cason Preserve in Upper Nyack, remained open from dawn to dusk throughout the pandemic. As a walk-in (or bike-in) only preserve without, as yet, amenities for people to congregate, the 2-year-old, village-owned preserve is a perfect place to experience nature without fear of violating social distancing recommendations. Mayor Karen Tarapata stresses that it is a “preserve not a park, it’s a place people can walk through to really experience nature.”

The lazy, S-shaped, switchback driveway that serves as a walkway through the preserve is wide enough to keep walkers socially distanced from each other. Paved with ancient asphalt and lined with Belgian Blocks, the walkway makes it easy to negotiate the steep hill between N. Broadway and N. Midland Ave. The path seems longer than it is, as it meanders through the preserve providing any number of expansive belvederes. In winter, the Hudson River is visible; in summer, wildlife is common; in spring, the raucous woody woodpecker call of a pileated woodpecker is heard; in fall, the leaf colors change by the minute. 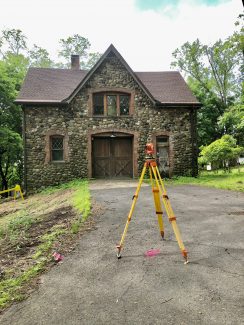 Survey under way in front of the carriage house.

River Hook is not just a single environment but a beautiful space with many different zones within its boundaries. Visitors will find two different sheep meadows: a lower meadow facing Broadway and a second one hidden from street view on the uphill slope behind the estate house. In the northeastern corner is a tiny stream. The driveway circles the 1930s Haring estate house, a historic structure with a riverside patio and western front-entranceway. Near the estate house, a stunning field-stone carriage house commands a northern upslope. On the western side near Midland Ave, a flat plateau is partly forested. The walkway snakes across the plateau to the southern border, passing a 1930s brick caretaker’s cottage. Behind the cottage is the River Hook garden. 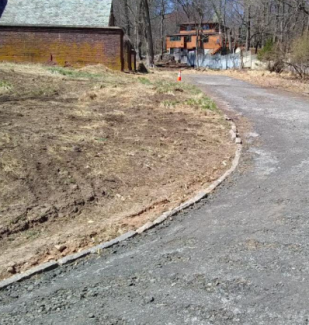 With property remediations completed by the end of 2019, Mayor Karen Tarapata held two meetings inviting input from villagers and setting up a volunteering program. A core group of citizens was eager to get started preparing the grounds for landscaping and to get started with low-cost improvements. Everything was set to go just when the pandemic struck. Organized volunteer days have been impossible since then. Still, much has been done.

The preserve was in rough shape after having been ignored as a working farm for the last 20 years. Old farm implements, tree stumps, dead and dying trees and shrubs, branches, and the detritus of 70 years littered the meadows. As luck would have it, the winter of 2020 was mild and the village had room in their snow removal OT budget to put the village DPW to work in removing scrap metal and mowing the lower meadow, all the while identifying issues that needed attention. 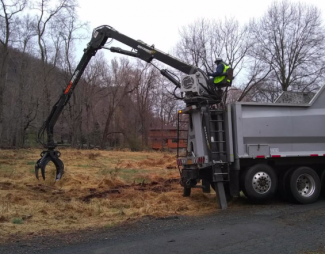 A tree service was hired this spring to remove the larger dead trees and tree stumps. Members of the land restoration committee continue the clean-up work individually. Several people  have been focused on exposing the Belgian Block that borders the driveway through the property. Nearly every day, at least one volunteer works on the preserve. To improve the two entrances, signage and crushed stone were put in place at the gates on Midland Ave and Broadway.

During committee meetings, according to local resident Paul Curley, “It became clear the preserve has amazing potential but the village doesn’t have the resources for development aside from ongoing maintenance.” In March, 2020, just as the pandemic was breaking out in New York, Curley set up Friends of River Hook, Inc., a not-for profit, to generate funds for River Hook development. Money has already been donated to help fund consulting architects and sustainability experts who will help envision the creative reuse of the buildings on the preserve. The job of the Friends of River Hook, beyond funding the visioning process, is to be an enabler for future projects that the Upper Nyack Village Board of Trustees approve, whatever they may be, whether for building renovation, preparation of grounds, landscaping, or installations of sculptures, to name a few possibilities. 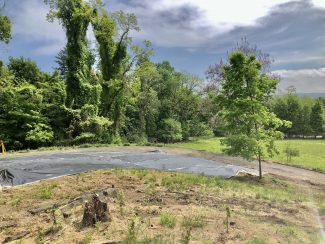 From the very beginning, villagers talked of renovating the preserve’s meadows and where possible restoring the meadows to a natural local ecology. An early proposal from an outside design firm to redo the lower meadow was turned down because it was too costly and suggested using herbicides. In its place, a natural meadow restoration team focused on small pilot project on an easterly slope has come on. Invasive Japanese stiltgrass was raked from the site and a series of upcycled billboard tarps were staked down by Mayor Tarapata, resident John Colgan, and other volunteers. The tarping will smother the invasive species and kill their seeds.  In October, the tarps will be removed and a native meadow seed mixture, curated by Landscape Designer Carolle Huber, will be planted. It’s a low-cost process that, if it works as planned, can be repeated in other parts of the preserve.

Tracy Kirshenbaum, until recently a resident at River Hook, has long maintained a vegetable garden on the top plateau of River Hook just east of Midland Ave. This year, under Tracy’s guidance, the garden has been expanded and new deerfencing has been put in place. One purpose of the ongoing garden is as a River Hook tree and shrubbery nursery. Purchasing trees and shrubs is expensive, especially in quantities needed for a 12-acre property. Nearly 100 potted seedlings bought from the state nursery in Saratoga have already been planted in the garden. 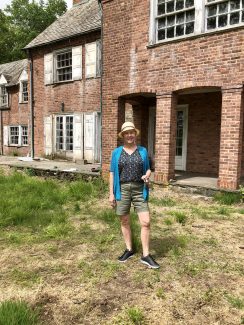 Tarapata in front of the Haring estate house.

In a miracle of timing, the N. Broadway sidewalk across the street from River Hook was completed this spring, just in time to help in the flow of walkers heading outside during lockdown. The sidewalk was funded entirely by the Tappan Zee Construction Company through the Department of Transportation to complete the Hudson River Greenway Trail from the bridge to the state parks.

The general consensus among residents is to focus on environmental conservation, to make River Hook a protected space for quiet events and education. Unlike the drama of nearby Hook Mountain and Nyack Beach State Park, River Hook ‘s individualistic spaces unfold in a quiet, meditative way; the serpentine walkway a perfect metaphor for our journey through the 2020 pandemic.

Donations to Friends of River Hook