Widewater is the fifth of the Nyack People & Places’ Barons of Broadway series, tracing how Upper Nyack farmland was converted to large estates by the nouveau riche of the Gilded Age. The series looks at the estates along the Hudson River and the people who built them. 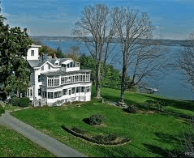 Aerial view of Widewater before it was demolished.

Leroy Frost made and lost several fortunes in the stock market in the early 20th century. One of his enduring assets was his riverfront estate called Widewater at 539 N. Broadway, which stood for over 100 years. Frost was a larger than life character. As a young man, he raced horses with Judge Arthur Tucker on N. Broadway, commuted by speedboat to the train at Tarrytown, owned a 3,000-acre game preserve in the Adirondacks, purchased the first car in Nyack, fathered 7 children, served in World War I, and was a local philanthropist who donated, among other things, the land on which the YMCA was built.

Widewater, purchased in the 1940s by Harold MacCartney, became known locally as the MacCartney house. Its sweeping views of the Hudson River were fondly remembered by resident Annie Lombardi. “I fell in love with Widewater the day I set eyes on it after I visited an apartment on the top/third floor for rent,” she said. “The house’s gabled roof gave my apartment this feel of ‘coziness.’ Practically every room had arched Palladian windows that gave an air of forgotten grandeur—and the views were spectacular… beautiful sunrises and equally beautiful moon rises. This was a once in a lifetime experience that I will never forget. My heart broke when I heard they were tearing the house down in 2016.” 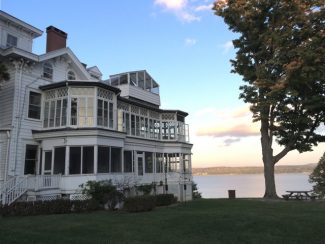 Today, the original Widewater has been replaced by a modern chateau-style home. 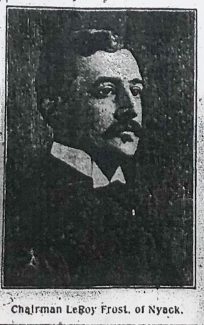 Newspaper photo of LeRoy Frost in 1903 when he served as Chairman of the Orangetown Commuter’s Committee.

Frost was born in Norwood NJ in 1872. His father Beniah Young (or B.Y. ) Frost was the cashier and manager at the W. S. Gurnee and Co brokerage house located at 80 Broadway in NYC. The Frosts appeared to live for a time in Grand View and then built a large house, called “BenMadge” (a combination of names of husband and wife Beniah and Margaret), on S. Broadway at Cornelison in 1892. The house was designed by Marshall Emery.

LeRoy married Marian (or Marieon) Towt, daughter of Edwin and Anne Towt of Nyack, on June 18, 1896. The first of their 8 children, Anna, was born the next year and died as an infant.

LeRoy became a runner on the New York Curb Exchange (later known as the American Stock Exchange) where his father was employed. In 1900, LeRoy obtained a seat on the NYSE. In 1904, his father became owner of the company and it became known as B. Y. Frost and Co. LeRoy took over control of the company upon his father’s death in 1926. He served as one of the Governors of the Exchange. 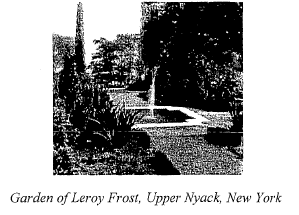 In 1906, Frost acquired the northern section of George Green’s farm, which included Greenland, Green’s Italianate-style home east of Broadway that had been built somewhere around 1850. Newspapers at the time state that Frost expanded and renovated the house. North of the house at 545N. Broadway was Green’s barn that served as the carriage house for Widewater.

Frost hired Charles Leavitt to landscape the 3.5 acre-property around the house, including what was once a vineyard and a nursery for Green’s fruit trees. Leavitt was a famous landscape designer known for his natural settings. He designed the approach roads for Kykuit, the Rockefeller estate in Westchester, and the Untermeyer home and gardens in Yonkers. He was hired as a landscape engineer for the PIPC in its early days.

Leavitt’s work must have been appealing. Wilson Foss, quarry owner and also a Nyack millionaire, hired Leavitt to design his chateau-style home just north of the Frost home that was built in 1908. The Foss home, now a coop apartment building called River House, still stands. 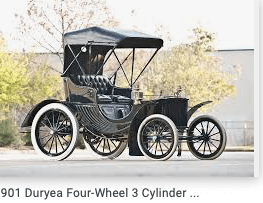 Frost’s 1899 Stevens-Duryea may have been the first car owned in Nyack, although some credit Shuyler’s Franklin convertible roadster purchased the same year. He was a bit of a daredevil in his car. After receiving a letter in 1906 complaining about his speeding, Frost promised not to exceed the speed limit of 10 miles per hour. Frost was known to race cars on the frozen Hudson River, where presumably there was no speed limit.

He took great pride in his guns and dogs, some of which cost thousands of dollars. In 1911, while hunting with neighbor George Chapman in the mountains west of Haverstraw, he bagged a wildcat that measured 3’4”. As reported by the New York Times, Frost won an invitational trap shooting contest for members of the NYSE in Westchester.

Frost had a number of speed boats at his docks. In 1927, Frost built a speedboat called the Ojai at the Peterson boat yard. Built of double-planked mahogany, Ojai was said to hit 45 mph by Captain G. A. White, who managed Frost’s boats. Frost commuted by boat to Tarrytown when the river was not frozen, parking at the Tarrytown Boat Club, where he was a beloved member. When he returned from the city on what is now the Metro North, his pilot would have the boat ready for him.

Frost is known to have been discharged from the US Navy at the end of WWI at the age of 47, although the nature of his service is unknown. His oldest son, Leroy Frost Jr., served in the ambulance corps for 18 months, returning home in April, 1919. He was in the thick of the fighting and was under fire several times. He received 3 decorations, including the Croix de Guerre. 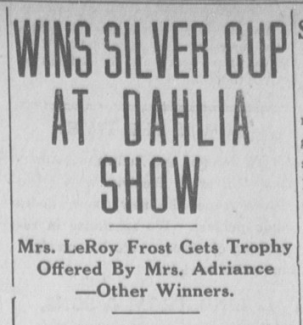 Mrs. Frost wins a prize at the 1926 Nyack Garden Club that was presented by Mrs. Adriance, the owner of a nearby large estate, Rivercliff.

The Frost family contributed generously to local causes. They were one of the large donors to Nyack Hospital, Nyack YMCA, Nyack library, and the Nyack Chapter of the Red Cross. After Leroy’s death, his neighbor and executor, J. DuPratt White, revealed that it was Frost who was the anonymous donor of the land for the Nyack YMCA.

LeRoy and Marian were active in the Grace Episcopal Church as a members and donors. Marian remained active in the church after LeRoy’s death. She hosted church events, such as a spring music festival, on their back porch overlooking the steps and lawn that served as a stage for the church choir. She also hosted interpretive dancers from Brooklyn.

The Frosts entertained at home. During the summer of 1920, they held a lawn party for about 100 friends that was catered by the manager of the St. George Hotel in Nyack, with New York City musicians. They were early members of the nearby Nyack Country Club that included all the elite of Upper Nyack. Marion was an active member of the Nyack Garden Club, frequently winning prizes for her dahlias. 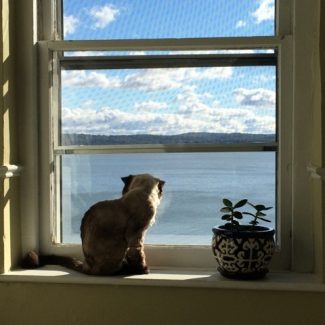 Cat’s view of the Hudson River from Widewater. Photo by Annie Lombardi.

LeRoy Frost, Jr. graduated from Harvard in 1923 after serving in WWI and went on to work as a stockbroker in NYC following in his father’s footsteps. He married Elena Pavlova of Moscow.  Leroy Jr.’s brother Floyd married Henrietta Brockenbrough of S. Nyack in 1932 at the height of the Depression. The bride wore a gown of chartreuse velvet trimmed with mink and a brown velvet hat. Daughter Nancy married the son Arthur Tompkins, a friend of LeRoy Jr., who lived in a large estate called Glen Iris near the Frosts at 401 N. Broadway. 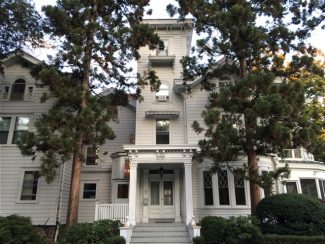 Widewater entrance in the 21st century. Photo by Annie Lambardi.

Leroy died suddenly in January 1931 following an operation performed by specialists at Harbor Hospital in NYC. In his will, handled by neighbor and attorney J. DuPratt White, Leroy left his estate to his wife, Marion Towt Frost. Unfortunately, LeRoy lost much of his wealth just before he died in the great stock market crash. In 1932, Marion was forced to sell part off the hunting lodge and acreage in the Adirondacks. The property west of the home along Lexow Ave was sold to Dr. Pierre Bernard, the Great Om, creator of the Clarkstown Country Club, and founder of yoga in America. Bernard already owned a number of estates in Upper Nyack, including the old Maxwell property, the Moorings, and the Rossiter’s home on Midland Ave. (now the Nyack Field Club). Frost had sided with Mayor Frank Crumbie in opposing Bernard’s activities in Upper Nyack.

Marion Towt Frost died on February 8, 1944. She left the contents of the house, garage, and boat house to her 5 surviving children. Her jewelry was divided among the daughters. A special bequest was made to her sister, the wife of Frank Crumbie.

Widewater after the Frosts 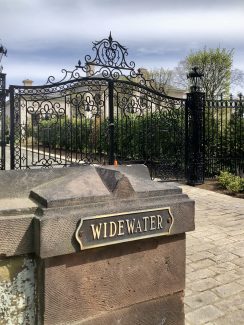 Gateway to the 2020 version of Widewater. 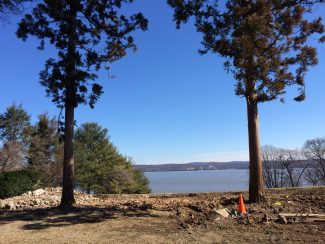 Widewater site after it was demolished. Photo by Annie Lombardi.

In 1944, Harold Y. MacCartney, an attorney living in Grand View, bought Widewater and its 3.5 acres. The MacCartneys, while also buying the section west of Broadway that had been purchased by Pierre Bernard, were to hold the Widewater through 2 generations. Villagers began to refer to the house as the MacCartney house rather than Widewater. By the 21st century, the house was a 6-room apartment building managed by Barry MacCartney, who occupied one of the the apartments. The house  was sold and demolished in 2016. The beautiful river side property has been kept intact and is now occupied by a large chateau. The MacCartney garage was kept and renovated. The entire property all the way down to the Hudson River was landscaped.

Much has changed since the quiet era of Greenland and its vineyards when LeRoy Frost, a friendly and generous risk-taker who won and lost several fortunes, made a dramatic entrance as one of the richest Barons of Broadway. All that remains of the original Widewater today is a stonewall with a plaque bearing the name “Widewater.”