You Know Birth of a Nation. But Do You Know Its Connection to Grandview? 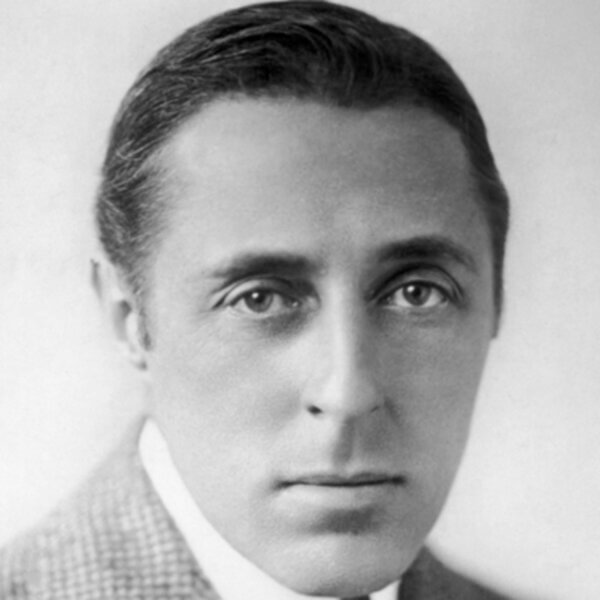 One afternoon while glancing at a rental magazine in Stop & Shop, I was approached by a realtor. “Need an apartment?” she asked.

She told me she had just the place in Grand-View-on-Hudson and that she’d show it to me the next evening.

The road over was dark, shadowed by trees and sparse lighting. I couldn’t read the house numbers. I drove back and forth until I saw a driveway with two snarling gargoyles. It was the address the realtor had given me. She greeted me at the door. “It’s down the road,” she said, leading the way, avoiding several cars and a bus, until we arrived at a squat building behind a stone wall where two  gargoyles also flanked the entrance. “There it is!” she said.

Red, white, and blue lights illuminated a long driveway. She raced to the building, pulled a large key ring from her pocket, jangling it until she found the one that unlocked the door. I stepped inside the pitch-black kitchen. She flicked a switch. A light bulb dangling from a cord like a noose illuminated the kitchen. “Large and sunny in daytime,” she said, raising a blind.

She led me through the bedroom, opened and shut the door of a small bathroom then invited me to have a seat in the living room. I glanced around. There was nothing remarkable about the design or furnishings. I wondered if meeting her was a mistake

I told her I was a writer.

“What a coincidence,” she said. “A famous writer lived here. D.W. Griffith. He rented this apartment when he wrote Birth of a Nation. Look on the mantle. You can still see his initials.”

I found the letters D.W. G. Horrified at the thought of renting the former home of the racist and pioneering filmmaker who’d penned one of the most offensive scripts in the history of film, I was silent.

Learn More About Birth of a Nation.


Indiewire: “Spike Lee’s Birth of a Nation Short Almost Got Him Kicked Out of NYU”

YouTube: Spike Lee Interview about his film BlackkkKlansman, and the horrific effects of Birth of a Nation on film culture

A few weeks later, I ran into a friend on the bus. When she saw me, she plopped down in a nearby seat, and I told her about the house. “The old bottle factory,” she sighed, giving me its history (it would eventually become a hat factory). We continued south on 9W towards the city. “There’s the mansion they used in the film,” she said, pointing to a colossal white structure set back from the road.

“They shot Birth of a Nation in Piermont?” I was stunned.

“Interior scenes and a few exteriors,” she said.

I knew little about D.W.Griffith except that he’d written and directed Birth of a Nation and that he’d started United Artists with Douglas Fairbanks, Mary Pickford, and Charlie Chaplin. And so I began researching his life.

Born in Kentucky to a former Confederate Army colonel, the family plunged into poverty when his father died. His mother moved to Louisville and opened a boarding house that failed, forcing Griffith to get work in a dry goods store and later a bookstore. At 32, he moved to New York.

Hoping to sell a script to Edison Studios Griffith was cast as an actor, began studying film, and accepted a job at Biography. In 1908, he replaced the son of a director who’d failed to imitate his father’s success, directed his first feature film, was reprimanded for cost overruns, a foreboding of future struggles,quit, joined Mutual. By 1910, he’d shot the first film in Hollywood. Production of Birth of a Nation began in 1914.

The film depicted slavery as benign, emancipated slaves as evil, and the Klan as heroic. The plot, part history and part fiction, involved the assassination of Lincoln and the relationship throughout the Civil War and Reconstruction between two families, the northern Stonemans and  southern Camerons. 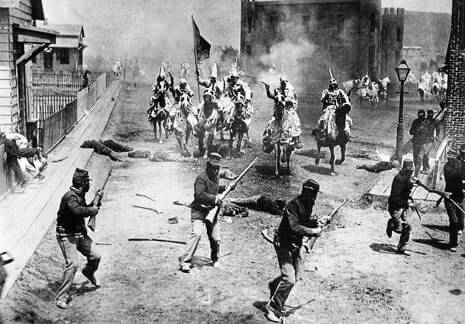 Still from Birth of a Nation.

It was the first 12-reel film made and the longest film ever shot. Griffith pioneered the use of close-ups, fade-outs, and extras. Some scenes were shot in California and others in Rockland. West Point engineers provided technical advice for the re-enacted Civil War battle scenes.

Birth of a Nation also made history as the first film screened at the White House by President Woodrow Wilson, and his friend, Thomas Dixon, Jr., author of the novel The Clansmen on which the film was based. The screening was attended by members of the Senate, the House of Representatives, members of the diplomatic corps and the entire Supreme Court, including the Chief Justice, Edward Douglass White, a former Klan member. The endorsement by such prominent individuals, who applauded and cheered throughout the film, legitimized the message, bolstered sales and emboldened the filmmakers to increase publicity.

In 1920, Griffith founded United Artists with Charles Chaplin, Douglas Fairbanks, and Mary Pickford. While several of his films did well, consistent profits eluded him. By 1924, he’d left the company. His career floundered, continuing to decline. Griffith was found unconscious in the lobby of the Knickerbocker Hotel on July 23,1948. A public service was held at Hollywood Masonic Temple. Few stars attended. While historians acknowledge his cinematic genius, pioneering use of advanced camera and narrative techniques, the scourge of bigotry throughout his work ultimately eclipsed whatever gifts Griffith had been given.

Birth of a Nation is available to watch on Kanopy.

Raised in the Midwest, Barbara Puff is a writer who lives in Nyack, NY.

The regular Nyack Weekender is on hiatus during the pandemic. In its place we are inviting community members for their recommendations of books, movies, TV shows, comfort foods, etc for each weekend. You can get each week’s update delivered to your mailbox auto-magically every Friday morning, by adding your name to our mail list. Visit our online sign-up sheet to subscribe.