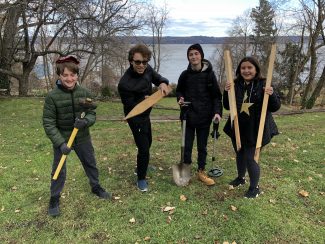 The thunder of cannons, the crash of cannonballs, the crack of musket fire. Villagers may think of the Revolutionary War as not only distant in time but also in place. Tom Perry’s student Skirmish Krew plan to change our thinking by bringing to life the deadly Hudson River skirmishes that happened at Sarvent’s Quarry in Upper Nyack Landing at the beginning of the Revolutionary War. They hope to place a new historical marker as a result of their research on N. Broadway near the intersection with Highmount Ave.

In some Skirmish Krew members’ own words:

We wanted to commemorate this historical event that occurred in our own back yard, so we made it happen. – Gabe Bucholz

Our goal is to get a historical marker near the property and educate people on what happened on the property. – Lily Anton

I wanted to learn about what had happened in the past in the town I grew up in. – Briana Sinnott

We heard that there was a battle that nobody knew about, and we wanted people to know some important history from Nyack. – Sam Gunther 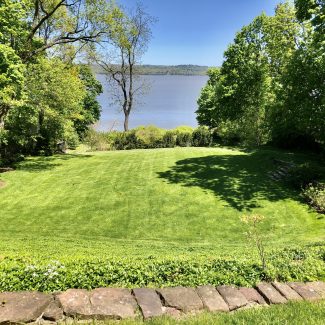 The lower section of Sarvent’s Quarry is today a gracefully landscaped backyard. The stones in the foreground front an S-shaped road. The barrier just below the grass overlooking the Hudson is likely where the Shore Guard waited for the British attack. Photo by Mike Hays.

There are a lot of rocks in Rockland County. And for many years the county was known for its quarries, the earliest of which cut sandstone from riverside cliffs. At one time, Nyack had a total of 31 quarries, 15 in Upper Nyack and 16 south of Nyack, employing some 200 laborers filling 10-12 boats a day. All this was slightly in the future since at the time of the Revolution most of the quarried sandstone was used in local buildings, a few of which may be seen in Nyack’s John Green House, the Old Stone Meeting House, and in many old foundations.

River quarries are hard to find today. Most are on private property, including the Sarvent quarry, a large, multi-tier hollow starting at the river’s edge with an S-shaped road running through it that now encompasses several gracefully landscaped backyards at the foot of Highmount Avenue. One old sandstone quarry that is still visible is on River Road in Grand View just beyond the S. Nyack border.

War Along the Hudson River

The lower Hudson River Valley was a hot spot early in the Revolutionary War. The British Navy, along with land troops, pursued Washington’s retreating army north after the loss of New York City. The last pitched battle occurred at White Plains on October 28, 1776. The powerful British Navy made numerous forays up the Hudson River, landing at many places to get water and food for troops and for Loyalists in New York City. They shelled homes along the western side of the river and sent marauding parties seeking retribution against citizens who supported the colonial cause. On occasion, they captured and imprisoned men of military age. Michael Cornelison and Garret Myers are two local men who were imprisoned. 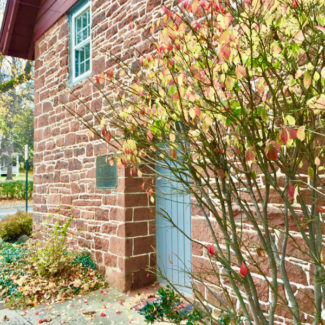 Detail of the front of the Old Stone Meeting House that was built from red sandstone quarried near Sarvent’s Quarry. Photo by Mike Hays.

Residents chose sides and sometimes switched back and forth. Henry Palmer, a sloop owner living in New York City, was offered substantial sums to work for the British. He refused, and was known to have smuggled out munitions from the New York Armory to Continental troops. Living in the city became too dangerous, and Palmer moved his family to N. Broadway in Upper Nyack near the foot of Old Mountain Road. Palmer’s residence became a British cannon target. Shelling Nyack was a sport for the British, an outsized response to what was then a village of only a dozen or so homes, but an indication of what a nuisance Nyack had become to the fleet. The homes of Palmer, Sarvent, Smith, and Cornelison were favorite targets for the British cannons.

Colonel Ann Hawkes Hay, leader of the Rockland/Orange County militia, was charged in a July letter from George Washington to take “every precaution to prevent the (British) men-of-war from getting any supplies or corresponding with disaffected inhabitants.” In addition, he was tasked with providing Washington “timely information of every maneuver of the ships.” The militia was never very large, counting on some 400 to protect a lot of relatively inaccessible territory. Often, Hay would get help from 30-day recruits. General Nathaniel Greene reported that Hay told him not all these short-term recruits were reliable. Many whose sympathies were with the colonies were more worried about bringing in the grain harvest. 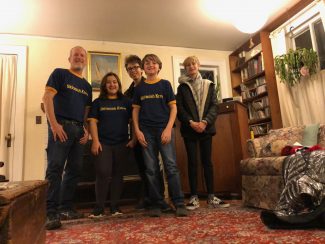 That left it up to a Shore Guard, largely staffed by local farmers, to protect Nyack and other towns. Upper Nyack brothers Major John Smith and Captain Aury Smith, and Captain Palmer, were key figures in the militia, and they helped organize the Shore Guard. Many members were not actually part of the militia, but would respond much as volunteer firemen do, rushing to the site of British shore incursions. Early warning of British movements from the ships was made possible by signal fires visible for many miles on top of High Tor and West Hook Mountains.

Hay instructed the Shore Guard to post sentries every day after 4p and to remain on post until relieved. At word of alarm, 20 hands were to be sent to the commanding officer. No one was allowed to pass without permit (spies being common at the time) and no liquor could be sold after 7p unless to a traveler. Orders were to be read morning and evening to the guards. 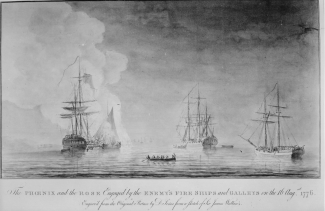 Line drawing of sea battle in August 1776 in the Tappan Zee. Hook Mt. is shown in the left of the drawing.

Nyack seems to have been quite successful in turning back British marauders. The British also landed at Piermont, Rockland Lake, and Haverstraw, the latter of which suffered greatly. Cattle and provisions were taken, homes were burned (including Hay’s home), and lives lost.

Two batteries were set up in Nyack, one near the landing dock in what is now downtown Nyack and one with a swivel gun at the Smith house on a point of land near Hook Mountain, visible today from Nyack Beach State Park.

Nyack’s riverside quarries became excellent places to defend. In fact, in September, ten tons of lead from military stores left behind by Washington’s retreat were hidden in the quarry on Major Smith’s property.

The Skirmishes at Sarvent’s Quarry 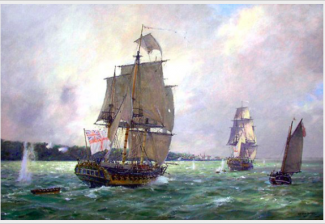 The British ships led by the Phoenix being shelled off Manhattan as they head up the Hudson River to Tappan Zee.

On July 12, 1776, the 44-gun Phoenix, a fifth-rate ship under the command of Captain Hyde Parker Jr., the 20-gun Rose, and 3 tenders, Trayal, Schuldam, and Charlotta, sailed up the Hudson River to test the Continental defense. Shore batteries along the lower Hudson River failed to stop the fleet and they sailed into the Tappan Zee and anchored. Hay’s men were ready. The British dispatched a barge and cutter to the Western shore at the Phillip Sarvent farm at the Upper Landing docks in Upper Nyack. The militia fired on the landing barge, forcing it to retreat to the fleet. Hay was also able to prevent a second landing attempt the same evening.

The British armada returned again in the fall of 1776, attempting to land at the quarry, but were pushed back by the Shore Guard. A number of cannonballs hit Sarvent’s house and barn. One shot just missed Colonel Hay, tearing off part of his hat. A December landing was a little more successful; a home was looted and some cattle removed. 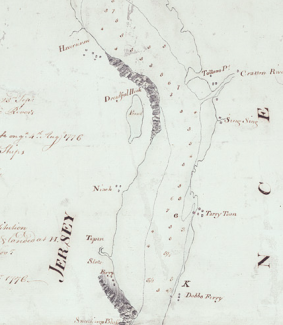 Detail from a British logbook on the Phoenix. The letter “G” just offshore from Tarrytown shows the placement of the British fleet during the November attack by Colonial ships. Note the spelling of “Niack”.

Before departing, the British stopped offshore of Palmer’s house just upriver from the Sarvent quarry, shelling the house from their bow carronade. With cannonballs entering her home, Mrs. Palmer was forced to leave, carrying an infant in her arms, running up the bank of the Upper Nyack brook alongside Old Mountain Road. A musket ball landed near her as she ran for her life, sending up a cloud of dirt. It is said that the bodies of British sailors (between 3 and 9, depending on the source) floated ashore the next day and were buried by the Shore Guard.

The British made other incursions in Upper Nyack besides those at Sarvent’s Quarry. Frequent attacks were made on Major Smith’s home and his swivel gun battery (although its ball could never reach the fleet anchored in the main channel two miles away). Smith’s house was burned down during one raid. Through it all, the Shore Guard was quite successful. While some were wounded, there were no fatalities at Sarvent’s Quarry or elsewhere in Nyack. The graves of John and Aury Smith and Phillip Sarvent can be found in the nearby Old Palmer Burying Ground on Old Mountain Road. 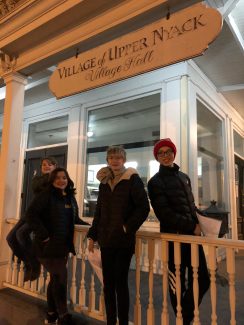 The Skirmish Krew, composed of 4 students who live near Sarvent’s Quarry, was formed in the fall of 2019 to advocate for a new historical marker commemorating the skirmishes at Sarvent’s Quarry. Mentored by Nyack High School science teacher Tom Perry, son of Upper Nyack Historian Win Perry, the students researched written accounts of the skirmishes. They explored the quarry site on foot and searched for buried cannonballs with a metal detector.

The Skirmish Krew appeared before the Upper Nyack Village Board in January, 2020 to discuss their plan for a marker. The Board and Mayor Tarapata endorsed the project. The Krew is now working with the Historical Society of the Nyacks to finalize the wording for the marker and to help locate funding for the project.

Proposed wording for the marker

During the Revolutionary War, British forces would anchor their ships in the Hudson River off Upper Nyack. Soldiers would come ashore and harass the local citizens, taking livestock and other provisions. The Continental Army protected the Western shore of the Hudson with the Third Regiment of Orange County Militia, also known as the Shore Guard, under the command of Col. Hawkes Hay. On several occasions in 1776 and 1777, British landing parties were repelled by these local patriots. Near this spot, in Sarvent’s Quarry, the Guard successfully defended our community.