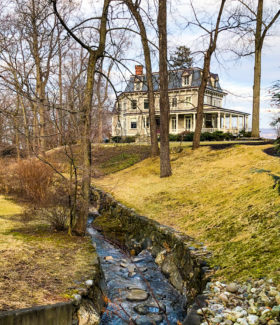 The trickling sounds of a springtime brook, fresh flower smells, emerging green leaves, and presence of historical sites are some of the things that will surprise walkers heading uphill alongside Upper Nyack Brook. The small water body flows alongside Old Mountain and Christian Herald Roads. Under normal circumstances, the walk would simply be a shortcut for speeding cars from 9W, but right now it offers a more meditative experience.

Tracing what was an ancient Native American trail that became Nyack’s first east-west road, walkers can step back in time to find eye-popping Glenholme on Crumbie’s corner; Nyack’s first cemetery, one for white people and one for slaves; Upper Nyack’s first school; the site of a Native-American ghost legend; and the spot where Nyack’s first brewery once stood.

Upper Nyack Brook is normally a quiet brook, but after rain storms it races downhill carving out deep glens in several places. Old Mountain Road, called the “Road to the Pond” by early settlers, remains much as it was, a narrow, twisting, and shady road with sharp grades. Appropriately, an estate known as Brookside once bordered the south side of the brook. With no sidewalks, pedestrians must be wary of speeding cars. During this troubled spring of 2020, a stop at the nearly 300 year-old Palmer burial grounds provides a hushed reflection on the long arc of time. 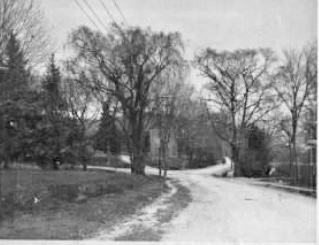 Upper Nyack Brook crosses Broadway at Crumbie’s corner where Old Mountain Road meets Broadway. These were once the only roads leading to Upper Nyack farms. On commanding hills on each side of the intersection are two picturesque old homes.

On the other side of Broadway, also on a small hill, is the Victorian home referred to as “Glenholme.” It was built by the Crumbie family in the middle of the 19th century, and was the home of Frank Crumbie, the Upper Nyack mayor from 1912 to 1937. Movie stars have traipsed through Glenholme in recent years. It was used as the family home in the 1998 Julia Roberts and Susan Sarandon movie, Stepmom as well as the 2010 Jennifer Aniston and Gerard Butler rom-com, The Bounty Hunter.

The brook forms Crumbie’s glen in front of the home and then flows downhill with waterfalls around the house. Rainstorms create cascading waterfalls that are hidden from public view as a gated private road cuts off access. Near here, Native Americans who followed the path along the brook would camp in summer where the brook enters the Hudson River, a perfect spot for fishing and oystering. 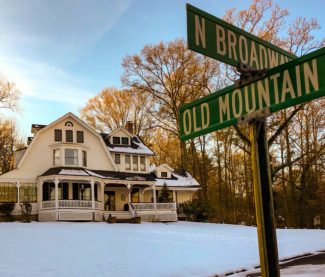 On the Northwest side of Crumbie’s corner, heading up Old Mountain Road but facing Broadway, is a three-story country style house. Once situated close to the intersection, it was moved to its current site and expanded around 1900. Garret Green, a son of John Green, once lived there and may have built the original house. (John Green was a businessman who built Nyack’s oldest remaining stone house on lower Main Street.) 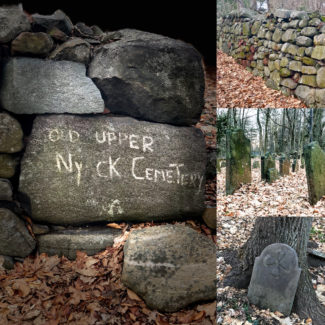 On the north side of Old Mountain Road, across a deep ravine carved out by the brook, is the Old Palmer Burial Grounds. It is one of the two oldest burial grounds in Clarkstown; it may contain over 80 burials. Fifty gravestones have been identified; the oldest is labeled C.K.D., referring to Cornelius Kuyper, who died on May 5, 1731. Kuyper owned all of the land from Hook Mountain to South Nyack, but for a small tract owned by Dowe Tallman. At least three revolutionary war soldiers and at least 18 children under the age of three are buried there. A slave cemetery now lost to time was located upstream nearer the brook. Almost 100 years after Kuyper died, James Palmer deeded the burial grounds to 24 trustees.

Upstream from the burial grounds and before reaching Midland Ave., near where an arts-and-craft style home now stands, was the location of the first Upper Nyack schoolhouse. It was a small, one-room wood building that measured 18 x 26 feet and cost $263.82. A few years later, a porch and privy were added. At first, it was a private school and teachers were paid $28 per year. By 1884, the school was replaced by a new building at a new location at the end of School Street.

Old Mountain Road becomes Christian Herald in an awkward junction as it crosses Midland Avenue. At the southwest corner of the junction stands the P. Tremper house, a small, red country house on a tiny lot that was carved out of a large farm in 1834. It is one of the few wooden homes from the early 19th century left in Nyack that has retained its early form.

Spook Hollow and the Legend of Camboan

A small spring-fed hollow with a dammed up pond once known as “Spook Hollow” is hidden just below the northeast intersection of 9-W and Christian Herald. The pond was once a swamp, and it has an outlet stream, now piped, along Camboan Road. Camboan and the nearby Spook Hollow Road memorialize the legend of the last Native American to live in Nyack, a man named Camboan. 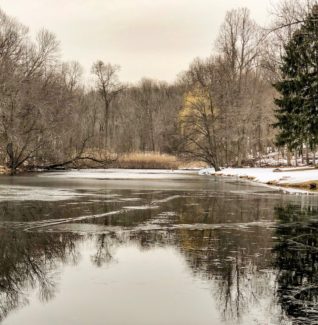 Around 1670, as the story goes, Camboan’s tribe left the Nyack area. He remained, camping within the glen at Spook Hollow. Camboan reportedly befriended the Dutch settlers. Legend has it that he tracked down two young girls who had been lost for five days in the woods. At some point, Camboan disappeared from the hollow and was not seen again. However, rumors of moccasin prints and campfire smoke in the glen persist after his disappearance. In time, the rumors led to the idea that his ghost (or “spook” in Dutch) inhabited the area. 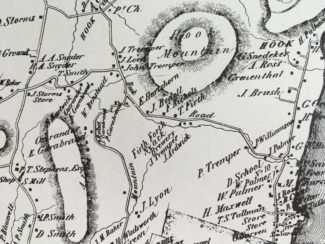 At the time of this 1854 map, Upper Nyack had but two roads. Old Mountain Road follows alongside the Upper Nyack Brook. The Firth Forth Brewery is shown on the map near the sources of the brook.

A brewery called the Firth Forth Nyack Brewery appears on an 1854 Rockland County map near the brook’s source above 9W, likely at a spring-fed pond. The Firth of Forth is a well-known estuary in Scotland. The brewer, one assumes, was a person identified on the 1854 map as T. Forth, who lived just across Christian Herald Road; hence, the brewery name. The brewery site is commemorated today by an organic garden run by Thomas Perry, a Nyack High School teacher.

By automobile, the 1.1-mile journey from Broadway to Nyack High School takes minutes with barely a glimpse of the brook. By contrast, a 30-minute uphill walk offers a respite from the constant COVID-19 news. It’s a chance to step back into the era before cars, televisions, and smartphones.