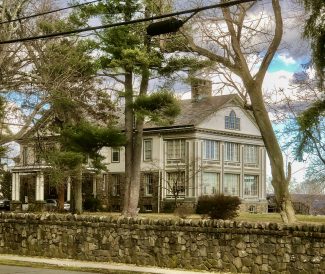 With a smile and a wave, villagers out for a fresh air walk on N. Broadway in Upper Nyack during our shelter-in-place keep their social distance by stepping aside into a driveway or onto the street. It’s nearly impossible to step aside to pass on one side due to the frequency of stone walls. Mostly we don’t think about these lichen-covered walls that we may have passed hundreds–if not thousands–of times. Defensive and decorative, these walls shield from view the early twentieth century river-side estates built on former Upper Nyack farms.

Best defined in the words of Frost’s 1914 disarmingly complex poem, Mending Wall, contemporaneous with many of these wall’s construction,

Before I built a wall I’d ask to know

What I was walling in or walling out,

And to whom I was like to give offense.

Something there is that doesn’t love a wall,

That wants it down.

For a few moments of centered meditation during our current horrible pandemic, a stone wall walk is a pleasant diversion from Covid-19 anxieties. With the exception of the first and longest stone wall, there is nearly an unbroken line of brick and stone walls from 511 to 627 N. Broadway. Below is a brief atlas to the stone walls, the estates, and the people who built them. 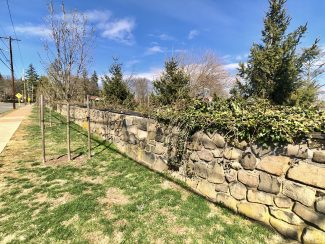 Long low wall in front of the Summit School

White was a successful NYC lawyer who grew up in Piermont. He was a champion of land preservation, and served on the first board of the Palisades Interstate Park Commission, later becoming its president. White started acquiring riverfront property in 1900 and built his Tudor-style mansion in 1927. The longest stone wall in Upper Nyack has a smooth face and a flat stone cap stretches all the way from Castle Heights to the Old Stone Meeting House. The initial section is somewhat higher than the section in front of the house. The entire wall front was, until recently, lined with linden trees. Since 1974, Summit School has occupied the home and its surrounding buildings. 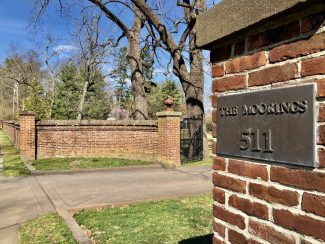 Brick gateway to The Moorings

The Moorings built by the Williamson family in stages, 511 N. Broadway

Six generations of Williamsons lived at the eastern end of their farm, starting in 1751. The current house was built in stages, with the stone part built around 1810, and a federal section built later. In 1925, The Moorings and its cottages were bought by Pierre Bernard who ran the Clarkstown Country Club. The brick wall, sporting a peaked cap and a rounded main entranceway with pillars topped by metal urns, now has more than one entrance. The wall was probably built in the 1920s.

Once the chauffer’s quarters of the Moorings, Wyndsong was named by Viola Bernard who made it her home after she sold the rest of the estate. A light blue gate graces the entrance.. 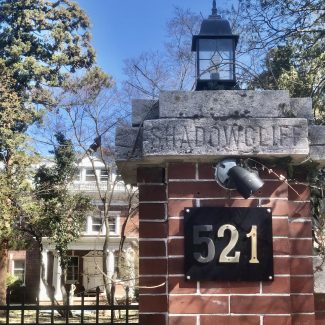 Shadowcliff with its brick wall

Fronted by a high brick wall with a flat stone top reminiscent of the next door Moorings estate, this three-story, 16,000 sq. foot neoclassical brick building was built by an oil magnate. It was the home of the Fellowship of Reconciliation from 1957 to 2019.

Broadway’s stone and brick walls are interrupted in one spot by a tall, spike-topped, metal fence in front of the residence of millionaire quarryman Richard Voss who built the limestone chateau in 1921. Known as River House today, the building contains co-ops. 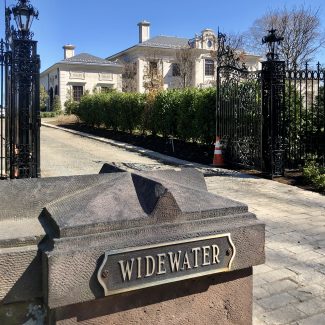 The stone wall at Widewater with a recently built home

Frost was a self-made Wall Street millionaire who purchased the southern part of a large farm called Greenland, owned for many years by George Green (son of Nyack’s John Green). Frost expanded the old Green house and added a tower. Frost owned the first car in Nyack and was known for his Hudson River racing boats. Widewater was purchased in the late 1940s by the MacCartney family. The house was demolished in 2018 and has been replaced by a large French baroque-style chateau. The sandstone wall topped by pyramidal granite pieces stretch from the Voss property to the foot of Lexow Ave.

Davies, a clock manufacturer, built a large mansion of stone and wood at the north end of the George Green property fronted by a traprock stone wall topped with filed stones. In 1926, George and Augusta Chapman lived there. Augusta was a champion lawn tennis player at the Nyack Country Club. Augusta donated some land across from house that is still the site the Upper Nyack Tennis Club. Their daughter, Marion, also a noted tennis player, married the next-door neighbor, R.W. D. Jewett Jr. 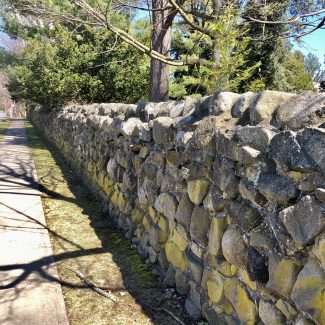 The Jewett enclave of houses and cottages was the summer residence of the Jewett family, whose primary residence was in Washington DC. Jewett, a lawyer in NYC, was active in local affairs, and owned a lot of property in the Nyacks.  Jewett died in 1917 and his eldest daughter died of the 1918 Spanish flu pandemic shortly after getting engaged. The large 22-room main house burned in 1957. The Jewett stone wall, probably built from rocks on the estate, does not a have smooth face, but otherwise is similar to the Widewater wall.

Appropriately, the last home fronted by a stone wall (excepting the modern wall at 655 N. Broadway) is the oldest. A small gate in the very northern end of the Jewett stone wall fronts a post-and-beam home that may date back to the early 1800s, and is thought to have been the home of Aury Smith, a militia captain during the Revolutionary War.