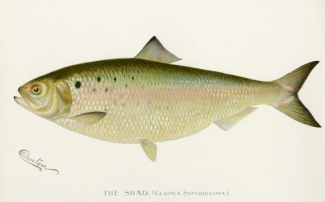 It’s a troubled April. The forsythia and dogwood are blooming. The full moon right now is a super-moon. Easter and Passover are four days apart, holidays that we can only celebrate this year online at a social distance. In past Aprils, the Hudson River revealed another miracle, the migration of shad. Today, the shad festivals and shad bakes are gone along with the shad themselves. The disappearance of a species is a reminder of how delicately balanced life on earth is.

The timing of Easter and Passover

The death of Jesus occurred at the time of Passover so it is logical that the timing of each holiday be close. Both holidays are to occur on or near a full moon in the spring. Passover is timed with the Jewish solar calendar and is always the 15th of Nisan. Easter, as defined in the Nicaean calendar of 325 CE, occurs on the Sunday after the first full moon after the vernal equinox. Both have a basis with the full moon, but the differing calendars create different timing, although in 2019 it was the same day. 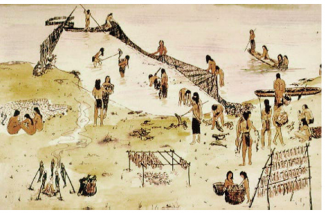 Shad return to the fresh water in which they are born to spawn. The Hudson River estuary along with the Delaware River were major entrance ways to upriver freshwater streams. Why and when the migration begins is somewhat of a mystery but may relate to water temperature, as shad do not like cold water. Algonquins identified shad migration as the time moss pinks (creeping phlox) bloomed at a time they called the Pink Moon, a moon identified by other Native Americans as the Fish Moon.

The Pink Moon meant it was time to break from inland winter camps to move to the Hudson River for fishing. Net traps were used to trap the plentiful shad on their way upstream. Shad were eaten fresh and dried. Shad skeletons, along with oyster shells, have been identified in middens along the river.

Shad were known as the fish that fed our founding fathers and families. The silvery ocean fish weigh 3-8 pounds. The flesh has a delicate, sweet flavor that is extremely high in Omega 3 acids. The drawback is that the fish have more bones than the human body, 1,000 in all. Even filets cut from the side of the fish contain numerous bones. An expert shad deboner is a rare individual. Some recommend baking shad in vinegar to dissolve the bones.

Shad roe, the eggs of the spawning female, are a culinary delicacy similar to sweetbreads. Shad roe is sautéed with bacon or butter and lightly seasoned. Shad roe was immortalized in Cole Porter’s Let’s Do It: “why ask if shad do it, waiter bring me shad roe.”

While the fish can be line-caught, using nets was the common method. Posts were driven into shallow water near shore. When the tide was in, fish would enter the net and then were trapped as the tide went out. Shad were usually harvested twice a day.

Shad nets were set in the shallow waters at South Nyack, where the Mario Cuomo Bridge crosses the river. The arrival of shad was mentioned every year in the local newspaper, the timing varied widely. The season lasted until May, about the time lilacs bloomed. Millions of pounds of shad would be taken from the river even as late as WWII. The fish would be baked, pickled, and smoked, the roe sautéed. 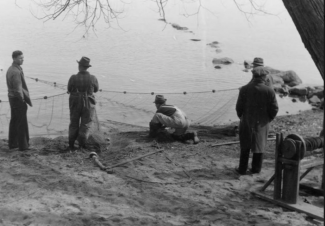 Shad fishing at the “Bight” in 1946. Courtesy of the Nyack Library

Even in the late 19th century, shad populations were declining due to dams built on freshwater streams. New York State raised millions of shad fingerlings to seed the Hudson River beginning in 1890. The practice continued for many years. In Nyack, fresh and live shad could be bought at the North River Shad Depot on Main St. at the James Pells & Son fish market. Salted shad were also available. Delivery by wagon was another possibility.

Shad populations seemed to rise and fall; the last major migration was in the 1980s. In 1975, cancer-causing PCBs were discovered in the Hudson River. PCBs affect migrating fish less than resident fish and NYS mandated that the resident striped bass could not be taken from the river. The population exploded. The striped bass is gregarious and much larger than shad, and they were able to feed on the smaller shad and its fingerlings. Year-by-year shad disappeared. At the same time as the striped bass explosion, intakes at the nuclear plant in Buchanan and other power plants sucked in the fingerlings through the intake screens. 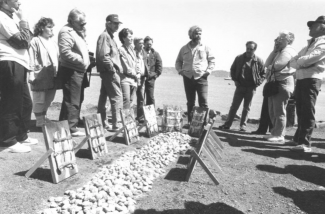 Shad festival in Memorial Park in the late 1980s. Courtesy of the Nyack Library

In Nyack, beginning in the 1980s, shad festivals were held in Memorial Park or at the nearby Nyack docks. A wood fire was set up and shad would be plank-smoked so that visitors could taste what was now a declining fish. Fisherman were there to talk about shad. Folk singers (sometimes Pete Seeger) and the Riverkeeper would participate. By the 1990s, with the disappearance of shad, the festivals also disappeared.

In 2010, with the population in steep decline, shad fishing was banned. Shad, shad fisherman, and shad festivals disappeared, too. The last local shad fisherman, Bob Gabrielson, often profiled in the media, and the subject of a film The Last Rivermen, died in 2009.

Now, the fish of our ancestors is just a lost memory. In this difficult springtime, we full well recognize the fragility of our own species. This period is a reminder of the frailty of all life on our planet. While we pray for the end of Covid-19 during this full Pink Moon and at Easter and Passover holidays, in Nyack we should also remember the fish that was here before Europeans, the fish that brought Native Americans to river slopes of Nyack every spring.