COVID-19 has infiltrated every part of our lives–our jobs, where we’re living, access to food, and so much more. But this pandemic is also affecting our planet and will have long term implications on climate change, especially as we rebuild the systems that have ground to a halt over the last few weeks. The world has stopped moving, but that also means that we’ve seen drastic reductions in carbon emissions around the world. It was reported a few weeks ago that emissions coming from China (the world’s largest carbon emitter) fell 25%. And cleaner air and water is likewise being reported from cities all over the world.

With so many people sick and so many people out of work, we need to think critically about what our world will look like after this crisis. Jacqueline Klopp, the Co-Director of the Center for Sustainable Urban Development at Columbia University’s Earth Institute, thinks there’s an opportunity to rebuild the system so it works better for the planet and better for people. We spoke to her about COVID-19’s effects on climate change and what the future might look like.

Tell me a bit about yourself and your job.

Klopp: The Earth Institute at Columbia was set up to bridge the gap between science and policy. We want to use science in the service of humanity. I work with amazing scientists on climate’s most critical issues like plastics, pollution, earthquakes, and other kinds of hazards. For the last 10 years, I’ve been doing a lot of work on urban areas, working with urban planners, architects, and scientists on climate adaptation and air pollution. I’m part of a group that’s mostly atmospheric scientists working on gathering data from smaller cities and then using that data for advocacy. We’ve created a Clean Air toolbox and work with a lot of lower cost sensors. In the hands of citizens and advocacy groups, this data can make a real impact. 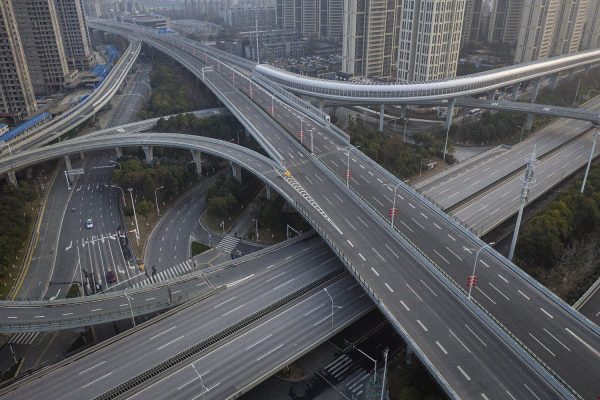 WUHAN, CHINA – FEBRUARY 03: (CHINA OUT) An aerial view of the roads and bridges are seen on February 3, 2020 in Wuhan, Hubei province, China. (Photo by Getty Images)

What has been the immediate impact of COVID-19 on climate change?

We’ve slowed down our economies–in China the satellite data shows that as economic activity slows down, there aren’t as many transport emissions. There’s a carbon reduction, but we also have cleaner air. Look at Southern California. The air quality monitors are showing clean air. But that’s going to be a short term impact unless people learn from that.

And what are some of the longer term impacts?

I’ve been engaging in this issue because I feel like this is a learning moment. We should be saying to people: “If you’re enjoying the clean air, you’re seeing how dirty our economy is.” When we kickstart our economies again, we should be kickstarting them in a way that they’re cleaner. We need to invest in energy transition and public transportation systems. You can see the debate around the bailout for the airlines. We are giving money to airlines, which we know contribute to high levels of pollution. But if we’re giving them money, we should put conditions around it.

Are there other forms of transportation we should be promoting?

Public transport is what the average person uses every day. It’s grossly underfunded and is also taking a big hit. As climate scientists, we know public transport is part of the solution. Of course, there’s the political reality that we still have a government that is not keen on addressing these issues. So we need a lot of pressure and mobilization to make sure that we get some of these wins. We can learn from this horrible, horrible thing that’s happening right now.

Besides air quality, what other climate change issues are being impacted by this pandemic? I’ve been thinking about waste in particular.

I don’t really have any special expertise on that, but I’ve also been thinking about that given the delivery containers–a lot more plastic. We’re allowing plastic bags although we’ve kind of banned them. On the other hand, people are eating more at home.

I’ve also been thinking about over sanitzating things as we move forward.

I was thinking the same thing as you when I saw those pictures in China. In Chinese cities, they were blasting chemicals to sanitize the streets. What are the implications of that? Was that super necessary?

It’s an interesting comparison to agriculture because of all the pesticide and herbicide use in our industrial food system and comparing between the two.

There are huge ecological implications now that we are having this pandemic. All the ways we are using antibiotics and generating resistance. Also, the wildlife trade and habitat destruction where we are bringing wildlife closer to our food systems. Like a bat virus affecting the whole world. With all the chemicals used, we are heading towards a massive species extinction. And people were even speculating with the pangolin trade–people are eating endangered animals. It’s time we normalize the ecological crisis.

How do we move forward from this?

Coronavirus has made it very clear that we have so many vulnerable people that don’t have adequate protection. And right now a lot of them are unemployed and struggling. Some states have taken emergency efforts, like moratorium on evictions to prevent people from getting onto the streets. When we are building back up, we should be employing people in ways that will help us build a better future. Let’s make sure we do something that’s socially and environmentally critical at the same time. This is the idea behind the Green New Deal that a lot of folks are pushing.

So how can we rebuild our systems correctly?

We can see how fragile our global systems are right now. And we can see that we need to protect ourselves from future crises, whether that’s pandemics, but also the increasing numbers of crises linked to climate change. We should use this time to regroup and get active in advocacy based on the things that we’ve learned. There’s a lot of focus on personal behaviors: less traveling, doing more things online, cooking at home more, and reducing waste. But it’s not enough. We need to be mobilizing online. We need to change the narrative. If we’re going to create jobs, why don’t we get people retrofitting buildings to use heat pumps? Why aren’t we expanding our public transit, which will create good jobs and help us with our climate crisis and cleaner air and deal with congestion. We have to hone in on these things and push them hard. That’s why I’m very pleased with this debate about the airlines. I think we have to use this time to mobilize electronically as best we can to be ready to really push. And that would be the silver lining to this kind of terrible situation.

How do we not go back to par for the course, forgetting the lessons that we learned here?

We’ve changed some of the way we behave, doing a lot more online and actually realizing we can be quite productive without having to travel as much. It’s really nice to have clean air. We can see how important our parks and public spaces are for us. It has been a lifesaver in New York for people to be able to walk.

Do you think there’s anything for climate and sustainability activists and advocates to learn about the dissemination of information from COVID pandemic or how to get messaging across?

We’ve been having this discussion amongst my colleagues about speaking to press during this crisis. I feel like it is a crisis of opportunity to talk about these things we need to talk about. It’s important to speak out. And it’s not out of disrespect for the people who are sick, but it’s for all those people who are going to get sick again. And all those people are going to be suffering from climate change related disasters. According to the World Health Organization, that’s about 150,000 people a year. There is this window and we have to push it open because it will close again if we just go back to normal. One of the big lessons is we need to have good proactive strategies. We have to figure out the ethics of how to use situations like these to enhance our learning as a society.

Earth Matters  focuses on conservation, sustainability, recycling and healthy living. This weekly series is brought to you by Maria Luisa Boutique.