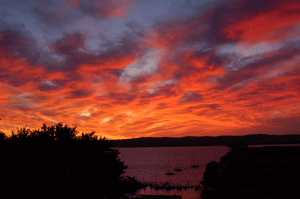 9/10/09 Sunrise Over the Hudson and Tarrytown. Photo Credit: Dave Zornow

It’s both “Spring: Ahead” and “Spring Ahead” on Sunday at 2a when Daylight Savings Time begins again.

Daylight Saving Time in the U.S. begins on the second Sunday of March and ends on the first Sunday of November each year. DST begins anew this year at 2a on 3/8.

It hasn’t always been this way. The NYT says DST has an on-again-off-again-on-again history which we can blame on the railroads… and Congress. Because each state gets to decide whether it will Spring ahead and Fall back, there are still places like Hawaii, most of Arizona, Puerto Rico, American Samoa, and the Virgin Islands that aren’t observant. According to National Geographic, there are standard time people throughout the year that don’t adhere to DST at all.

Although Ben Franklin is often credited with creating DST, that honor really goes to Hudson–although it’s not the same Hudson as guy for whom our river is named. New Zealand entomologist and astronomer George Vernon Hudson first proposed the idea of a two-hour time shift in an 1895 paper to the Wellington Philosophical Society.

If you are having trouble adjusting to the new time and can’t fall asleep, visit Wikipedia for more information than you would ever need to know about DST history, economic implications, and where it is and isn’t implemented.