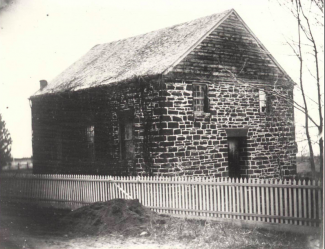 Earliest known photograph of the Old Stone meeting house, circa 1860. The walls, windows and door location are unchanged today, but a steeper roof has been added.

With a speed unheard of today, our village ancestors came together on a cold November night, deciding not only to join the Methodist faith but also to begin actual construction of their new church the very next day. Completed in 1813, the Old Stone Meeting House is a sturdy monument to the determination and grit of Nyack’s early citizens that has been put to use for over 200 years.

The Meeting House founders were of Dutch ancestry and had previously applied for permission to form a Dutch Reformed Church but were turned down because of fear that a church in Nyack would detract from attendance at the one in New Hempstead, Clarkstown. Opting for Methodism instead, they resolved “to begin building the church tomorrow.” Five men are believed to have been present at that first meeting at the home of John Green:

Location of the church

People often ask, “Why was Nyack’s first church built so far from the center of town?” The answer is that there was not yet a center of town. Nyack, including what are now Upper Nyack and South Nyack, was just a row of a dozen farms and several landings with boatyards. At the time, the “Upper Landing” had the only passable road to the interior of the county, known then as the “road to the pond” and now as Old Mountain and Christian Herald Roads. At John Van Houten’s thriving boatyard, with regular sloop service to New York, a post office and a hotel were located at the Upper Landing. Guessing that this might become “downtown Nyack” was not a far-fetched bet.

The church was built by the old traditional methods—locally quarried red sandstone, roughly squared and roughly coursed, laid up with lime mortar complete with a massive floor, ceiling, and roof beams hewn with broadax and adze, and the interior finished with lime plaster, reinforced with horsehair.  The floor and wainscot were made of pine boards and the door was board-on-board construction, meaning a layer of vertical tongue-and-groove boards on the outside and a horizontal layer of similar boards on the interior, fastened together with doornails.

Doornails were long iron nails, driven from the outside and projecting through on the inside.  The projecting part was then bent in a hook shape around an ax head and driven back into the wood so the nail could not be pulled out… hence the expression “dead as a doornail.”  The door hardware was made by a local blacksmith. The windows were probably similar to those that presently remain. The original roof was probably wood shingles. Heat was provided by a large round coal stove and light by kerosene lamps and candles. There was no plumbing, perhaps an outhouse. A tall pulpit existed in the early years.

Interior of the Old Stone Meeting House circa 1900. Kerosene lamps, coal stove, and Sunday school library are visible. The original tall pulpit has been removed. The portrait is of William Palmer, a founding trustee.

The church building is a simple Federal Style rectangular shape with a gable roof and regularly spaced, symmetrical window and door openings.  The only slightly fancy touches are the keystone-shaped stone lintels over the openings and the smoothly chiseled stones forming quoins at the corners.  A date stone chiseled with 1813 is placed at the lower left corner of the south wall. Another, perhaps a reject, is included high in the east wall near the south corner.

The church could hold close to 100 people in closely spaced pews and there is a balcony to accommodate perhaps 20 more. Later generations added hinged panels hooked to the ceiling that could be lowered to convert the balcony to a separate classroom. The floor of the balcony slopes to improve sight lines.

The Meeting House in the age of slavery

The church was built 15 years before the end of slavery in New York State. The founding trustees and many of the neighboring farmers owned two to four slaves each, according to the 1820 Federal Census.  It was customary in early Methodist churches to seat slaves in the balcony and that was certainly the case here.

Peter Williamson, who died at 85 as the last resident of Rockland County born in bondage, having been a slave on the Williamson farm, was known to have worked on the Meeting House when it was erected. He continued to live in Upper Nyack as a freedman where he kept a little store and his wife was employed in the Maxwell household. Williamson’s funeral took place in the Stone Church.

The Meeting House over time 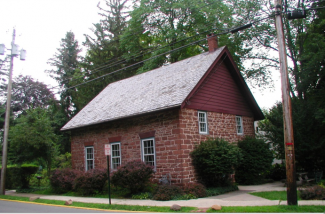 The Old Stone Meeting House at the time of acquisition by the Village of Upper Nyack in 2006. It has stood almost unchanged for two centuries and still serves the community.

The Nyack Methodists outgrew this building and built their second home on Piermont Avenue, north of Depew Avenue, and their third home at the corner of South Broadway and Division Avenue. The original building was used for a while as a Methodist Sunday School. Eventually, the roof rotted away; the building was in desperate condition by about 1860.

A major rehabilitation was undertaken, spearheaded by George Green, son of the founding trustee, and owner of what was later the MacCartney estate. Steeper roof rafters and the slate roof were added, and the interior was replastered. A non-denominational organization called the Old Stone Church used the building for most of the 20th Century and maintained it well. The bronze plaque was added to the front of the building in 1928 by the Rockland County Society.

In 1976, the floor succumbed to insects and rot and was completely replaced. A small restroom was added. In 1999 the building was placed on the National Register of Historic Places, and in 2017 it was also named a United Methodist Historic Site.

By 2005, the key had been passed to several different groups, and neighbors complained about late-night noise and poor maintenance. The Village of Upper Nyack acquired title to the building by court order, buying out the interests of the Methodist Church and other organizations. Now known as the “Old Stone Meeting House,” the building has a new slate roof, heating, and air conditioning, and is available for meetings, classes, concerts, and similar events.

Photos and postcards courtesy of the Nyack Library

Winston Perry, a life-long resident of Upper Nyack, has been Village Historian since 1973.  Retired from a 50-year career as an architect, he now devotes his time to local history and historic preservation. He is President of the John Green Preservation Coalition and President of The Historical Society of the Nyacks. He encourages villagers and others to be involved in preservation and local history.