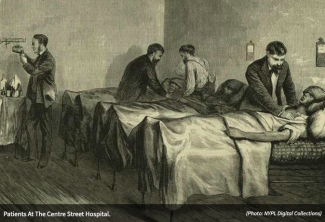 Panic engulfed New York City like in an apocalyptic movie. Almost half of the city fled the threat of an unknown contagion. The long forgotten global pandemic of Asiatic cholera that reached America in July 1832 set off a mass panic. Since the disease seemed to know no boundaries or limits, city residents who could afford it found ways to leave the city any way they could for places without cholera. Refugees bought passage on steamboats headed up the Hudson, paying almost any price. Most villages along the Hudson provided shelter, Nyack among them.

An often-fatal disease of unknown origin called cholera originated in India in 1817 and spread slowly to Europe, killing 13,000 in Paris before it arrived in America. Americans had hoped that the Atlantic Ocean would be a barrier. The disease was poorly understood and little was done to prepare. A quarantine was placed on all people arriving from Europe in June, 1832, shortly before the pandemic hit the US. In New York City, five temporary hospitals were built, the streets were cleaned, and many were forced to evacuate the slums. As a water-borne disease it mostly struck the poorer sections of the city, where water was polluted. Immigrants were blamed for the disease, especially by political forces that would soon create the anti-immigration, nativist Know Nothing Party.

Poster of location of cholera deaths in New York City on July 17, 1932

First, a case appeared in Canada, then an Irish immigrant named “Fitzgerald” became sick at Five Points in New York City, as well as his two children, who died. Public health officials were slow to call it cholera. On July 2, the news became public in the city. When his death was announced, panic ensued.

Philip Hone, a diarist and former mayor of NYC who stayed behind, stated that, “There are no booths in Broadway, the parade which was ordered here has been countermanded, no corporation dinner, and no ringing of bells.”

A Vanderbilt Hudson River steamer from 1847

On July 3, 1832, a great exodus from New York City began. People left by carriage, boat, and on foot. In the words of the Evening Post,”all panic struck, fleeing from the city, as we may suppose those of Pompeii fled when the red lava showered down on their houses.”

By that afternoon, the steamboat North America left Barclay wharf with, according to a Dr. Clark, “such a crowd on board as she never carried before; while from the pier, foot of Barclay Street to Broadway and up to Chambers Street stood a double row of carriages, their inmates wishing to go on the board, and offering the most fabulous prices for a passage.” The steamboat line owned by Cornelius Vanderbilt made a fortune that day. It also probably helped spread the disease to other regions. Every farmhouse and country home within a radius of thirty miles was soon full.

It is estimated that between 80,000 and 100,000 left the city of 200,000 within three days, roughly half the population at the time. Roughly 3,000 people died in the short-lived epidemic that ran its course locally by Christmas (although cholera outbreaks occurred again in later years).

Smith’s hotel was a two-story shingled house with an attic and was known as a temperance hotel. Early meetings of the Nyack Reformed Church were held in the parlors on Sunday afternoon.The hotel offered lodging and food and its guest list grew by word of  mouth among New York Coty dwellers.

During the cholera pandemic of 1832, the Mansion was filled with 80 boarders during July.  Smith had to hire two or three extra houses as overflow for guests; meals were taken at the hotel.

Because of the epidemic, Nyack discovered a new business model as a summer resort, a safe haven from disease (and heat) for those who could afford it. With the success of the Mansion House, other houses followed suit. Village leaders like Peter Smith and Robert Hart opened their houses to guests. By 1849, the Pavilion, a large resort, was built on the hill at the end of Catherine Street. Others followed, including the Prospect House and the Tappan Zee Inn, catering to the summer pleasures of vacationers. The boom as a summer resort lasted until the turn of the century when larger resorts and distant locations became available and Nyack’s day as refuge from pandemics was over.