by Talia Reiss and Emmy Udry

At 5:30a, on February 19th, nine activists from Extinction Rebellion Youth Rockland, a local chapter of the decentralized, global youth-led movement, gathered in Veterans Memorial Park in downtown Nyack. Equipped with buckets of chalk, flashlights, and many layers of warm clothing to combat the below-freezing temperatures, the high school students spread out in the areas around the gazebo and on the sidewalks reaching from Cedar Street to Pie Lady and Son. The students chalked statistics about the climate crisis, quotes from youth leaders of the climate movement, and important messages regarding climate justice.

Among the quotes chalked around Veterans Memorial Park, climate justice and environmental racism were common themes. One statistic, chalked by climate leader Emmy Udry, reminded passersby of the intersectionality of climate justice and racial justice, citing the fact that African American communities are “1.54 times more affected by pollution than the rest of the rest of the American population.” Another message, chalked to the right of the gazebo by sophomore Claire Jacobson, demanded justified attention, reading “CLIMATE JUSTICE MEANS… racial justice, indigenous justice, LGBTQ+ justice, migrant justice, JUSTICE FOR ALL.”

Extinction Rebellion Youth Rockland has quickly become a leading voice in the fight for climate action and justice in Nyack and Rockland County. The small grassroots local group decided to chalk the streets of downtown Nyack for multiple reasons–among them, to educate people about the climate crisis through facts, statistics, and art in an eye-catching way, and to make the climate movement both more creative and productive in the community. Next up for XR Youth Rockland? Organizing the next climate strike in Rockland County, set to take place on Wednesday, April 22nd, on Earth Day, around the U.S. and the world. 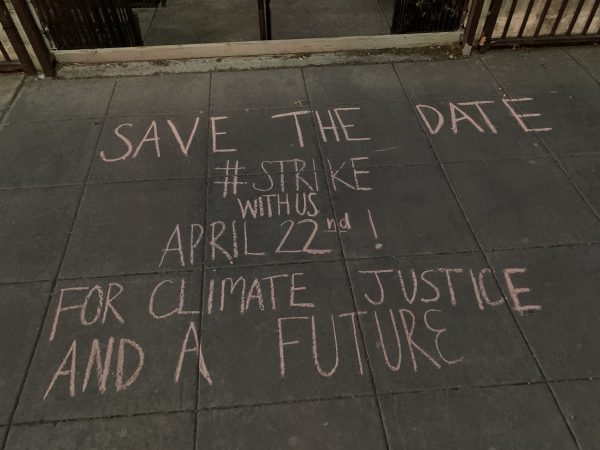 Among the most alarming statistics chalked by the Extinction Rebellion activists was written by Avery Demetres, sophomore at Nyack High School. This quote, which was published by NASA, informed passersby that “19 of the 20 warmest years on record have occurred since 2001.”

Perhaps the most talked-about effect of the climate crisis is the increase in average temperatures worldwide. Consequently, polar ice caps can no longer survive in the warming climate, and the excess water has resulted in the rise of sea levels, which will only increase as the planet continues to heat. In fact, “global sea levels could rise 1 meter if we don’t act now,” read a message chalked by sophomore Daphne Bon. 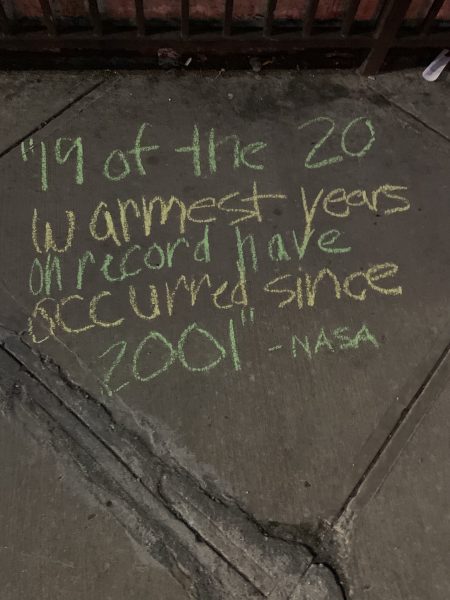 While climate change is often thought only to include the increase in global temperatures, it, quite literally, implies a change in all areas of our climate. Not only has global warming impacted all life systems across the planet, but we’ve seen an increase in severity of storms, flooding, drought, wildfires, and famine. With all this in mind, freshman Claire Heider chalked a message which stated, “The frequency of high intensity hurricanes ranked as categories 4 and 5 has increased over the last 30 years.”

A quote from Jamie Margolin, chalked by sophomore Olivia Stepper, read, “I am especially proud of building a movement that is run by women of color. It provides a safe place for girls like me to lead.” One goal of the climate movement has been to prioritize inclusivity and amplify the marginalized voices most impacted by the climate crisis. Jamie Margolin, who has self-identified as queer and latinx, built a movement in which girls of color are encouraged to take leadership roles. This movement, entitled Zero Hour, has become a well-known youth climate group throughout the United States.

Another quote by Jamie Margolin, as chalked by freshman activist Talia Reiss, pointed out the carelessness of past generations, claiming that “[the youth] had no power in creating the systems that are destroying our world and futures- and yet we are and will be paying the biggest price for the older generations’ recklessness.”

A leading cause of global heating is the emission of greenhouse gases, which has drastically increased due to pollution from transportation. In fact, according to the U.S. Environmental Protection Agency, “net emissions of greenhouse gases from human activities increased by 35% from 1910 to 2010”. Talia Reiss chalked this alarming statistic on the corner of Main Street and Cedar Street, drawing attention to the consequences of human activity. 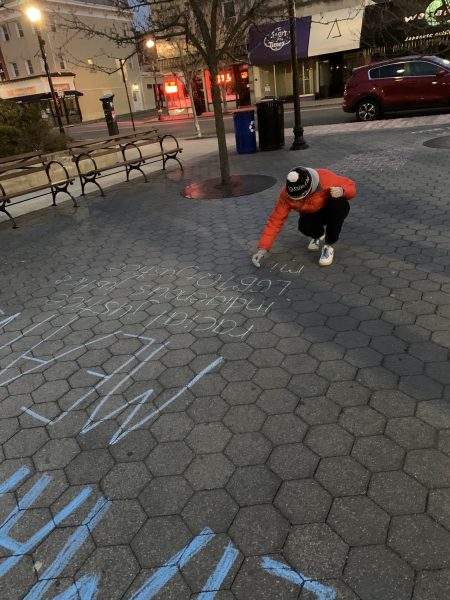 Among the other XR Youth Rockland members not aforementioned are senior Isabel Heider, who chalked the global Extinction Rebellion symbol in the center of the gazebo; and freshman Risen Wayne, who is responsible for the quote which read, “There are things you can do for yourself, but there comes a point when things have to happen on a governmental level—70 percent of emissions come from 100 companies all around the world” (Alexandria Villaseñor).

For more images and information regarding upcoming events, please follow @xryouth.rockland on Instagram and @xryouthrockland on Twitter. Or, email xryouthrockland@gmail.com to be added to the newsletter.