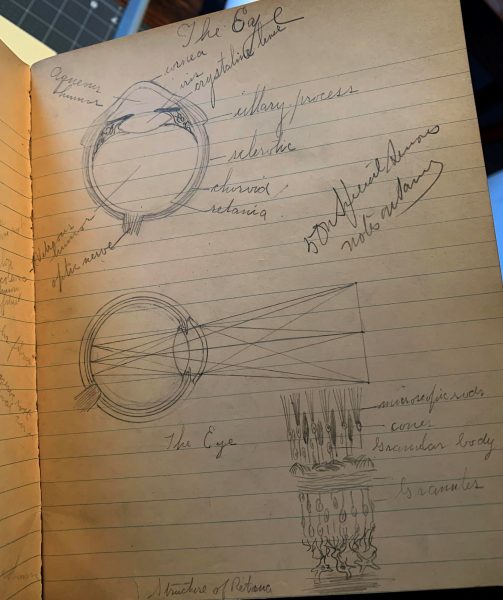 Nyack, NY, where Edward Hopper lived until he moved to Manhattan at nearly thirty years old, was one of the first towns in the region to buy into a public schooling system, starting Liberty Street School in 1859, where Hopper and his sister, Marion, completed their elementary education. Later, in 1899, Hopper graduated from Nyack High School. During this time, Hopper went through the standardized academic lessons and kept dutiful notebooks. The photo included in this dispatch is of a page of notes from Hopper’s anatomy course. For this lesson, he was taught about the eye–how light and images are interpreted.

Several hundred years before, in the early 1600s, Johannes Kepler observed a camera obscura–a darkened room in which light was introduced to the space through a small hole, causing an inversion of whatever scene was reflected. This led to the theory of the retinal image, that what we observe through sight is reversed and restored through refraction and reflection. Kepler’s theories on optical imagery evolved to our current understanding of how the eye works (which Hopper depicts in the corresponding sketch), and more so suggested the possibilities for projected images, leading to the development of photography, and later, filmmaking. The theory suggested a new relationship between the observer and the world around them.

Hopper had a lifelong fascination with light (and later with film), which came through even in his commissioned sketches. In Boy and the Moon, which is kept in the Whitney Museum’s archive, we see a scene reminiscent of the bedroom in which Hopper slept for over a quarter of his life. Just across the Hudson River, which flows is visible from Hopper’s childhood bedroom window, is the Sleepy Hollow lighthouse. In the illustration, the moonlight is portrayed in a very similar position to where the lighthouse would be seen across the river from his window–if he were, let’s say, to sit up in the middle of the night and turn leftwards to an opening in the wall. 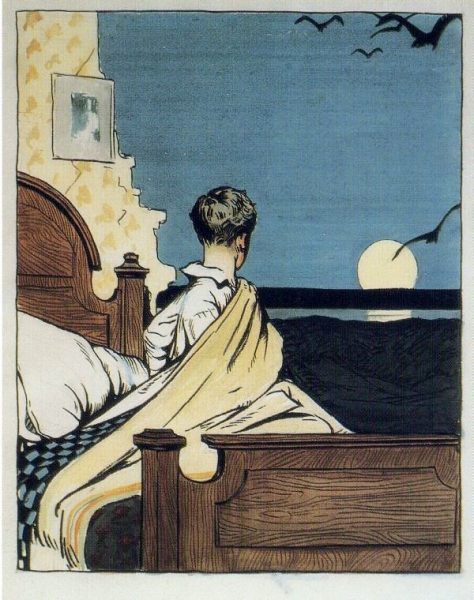 It is easy to wonder what moment is being recalled in this image, what it meant for Hopper’s child subject to turn towards the light in the distance. Considering the concept of the eye and how perception works at an anatomical level–that there is something outside of the seer being perceived and interpreted–opens easily to suggestions of enlightenment, discovery, and divinity. Hopper was raised in a Christian household, and there are some family bibles left in EHH’s archive, but it’s unclear how much of this practice was a part of Hopper’s adulthood. It’s tempting to speculate what the idea of “the light” might represent to a young child and to an artist who returned to the subject throughout their career. Why is anyone drawn towards certain scenes or places? What meaning do we bring to the objects of our lives? Are we often searching for meanings beyond the suggestions of an artist?

What we can observe is that Hopper went on to have a lifelong fascination with how to use light within a painting, and lighthouses themselves. He spent several summers in Maine, painting along the coast.

With the invention of photography in the mid-19th century, light as an artistic tool further entered the conversation. Hopper was photographed several times throughout his childhood, a few of which are on display at EHH. Hopper’s later works reflect a sense of cinematic composition. House by the Railroad is said to have inspired director Alfred Hitchcock’s Psycho. Many directors and photographers continue to cite Hopper’s influence.

What I see when I look at Hopper’s school notes is what was being presented to him by the outside world and the precision with which he drew and labeled optic features. But the microscopic drawings still look as though they were penned by the hands of a child–which, of course, Hopper was. This drawing could be pulled from the notebook of thousands of students across the country from this exact moment in history. The fascination, of course, is the link I’ve made between what was and what came to be. Here, drawn–maybe mid-fidget–is the first impression of light and vision on a young artist who would go on to create works that pushed the boundaries of what was possible within realism.

But all of this starts with the eye, with perception, with interpretation. The impressions made in childhood, and how they unfold throughout one’s life.