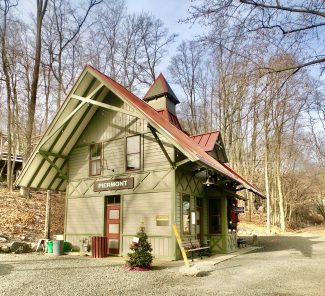 Morse code meets the internet in Orangetown’s first online romance, which occurred nearly 100 years before the internet was invented, when the telegraph operators at Nyack and Piermont train stations fell in love over the “wire.”

Marian Belle Byram (known as Belle) and Thomas Kelley both started working as telegraph operators in 1908, Belle at Piermont’s station and Thomas at Nyack’s. Before long, they were courting using the Morse code shortcut “88” for love and kisses. By 1913, they married.

Thomas was a local boy who grew up in a railroad family in Piermont. Belle was born in upstate New York and was one of the many strong and courageous women of her time who broke convention by venturing into a profession as a single woman.

Valentine’s Day cupids were known to strike telegraph operators who spent long hours on the wire, dispensing news and personal messages, in addition to critical messages about train safety. The single-track between Nyack and Piermont ran many north and southbound trains. Keeping them separate was a critical duty for Belle and Thomas. The Piermont train station where love turned to marriage is now, in the words of Piermont Historical Society President Barbara Scheulen, “a museum that shares the stories of Piermont’s rich history.” It’s also a fit memorial to the romance of Belle and Thomas.

Telegraph operators spent much of their time wearing headphones to hear messages while near a telegraph key to reply in Morse code. A series of dots (short) and dashes (long; about the length of three dots) were used with pauses between words. As with today’s text messages, shortcuts were created to speed transmission. For example, the code for the letter “E” was a single dot since it is the most commonly used letter in the English alphabet. “WC” was the code for WILCO, or “message received, will comply.”

Every telegraph operator had their own recognizable signature for sending messages known as their “fist.” Thus, two telegraph operators would begin to know each other online. One thing leads to another, and romance from afar blooms.

Online liaisons were first conceived, at least in fiction, as early as 1880. Ella Cheever Thayer, a telegraph operator and suffragette-inspired playwright and novelist, wrote a popular novel, Wired Love: A Romance of Dots and Dashes. In it, the two main characters find it is easier to speak over the wire than in person. At first, they don’t even know each other’s gender. In a prescient thought about mobile phones, one character even imagines that it would be easier “to carry something around in their pockets” that would allow messages to be sent or received.

The Piermont train station built in 1883 to replace a bare platform has been meticulously restored to its full original glory by the Piermont Historical Society as a museum. The station was called Piermont-on-the-hill to distinguish it from those on the Erie Railroad that opened in 1851 and stretched from Piermont Pier to Dunkirk, NY on Lake Erie.

By 1870, the Northern Railroad connected Jersey City with Nyack and the line passed through Piermont. The various tracks from downtown Piermont and from Nyack were connected at a train station then known as Piermont Station, and sometimes called Upper Piermont Station, in what is now the Village of Sparkill. 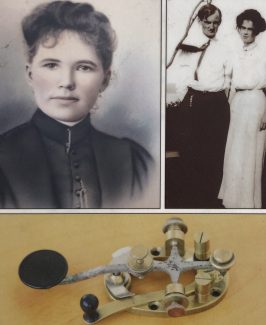 Photo of Belle, wedding picture of Belle and Thomas, and a telegraph key (courtesy of the Piermont Historical Society).

The station was designed by M. W. DeBaun. It measured 20 x 30 feet with two stories and a steeply pitched roof. Two front doors graced the front of the building, one for men and one for women so that the sexes would not mingle in the waiting room, as was the custom of the time. The first floor contained the waiting room and ticket office. The second floor contained living quarters. The exterior was painted in French grey with olive trim. Landscaping was by I. M. Van Wagner, who also ran a photographic studio in downtown Nyack.

By the time Belle became telegraph operator and station manager, up to 43 passenger trains passed through the station every day. Belle handled two telegraph services at the station: Western Union and train communication. Her telegraph station was located in the ticket booth.  The Western Union telegraph service received stacks of messages between the Piermont Paper Mill and Box Factory. Since Piermont had no newspaper, kids came to the station to get baseball scores. According to Belle Kelly, “On election night, the company would send a special operator up.”

Thomas Kelly came from a railroad family who settled in Piermont when the Erie line and Western Union were both booming. Belle grew up in Watkins Glen, the daughter of Henry J. Byram and Mary Dowling. She “always liked telegraphy,” and once she finished telegraph school in Elmira, she got a job in Piermont on the Northern Railroad. Telegraphy was one of the first occupations open to women in the early 20th century, and Belle took full advantage of the opportunity.

How exactly the two made contact online or met face-to-face is not recorded, but they surely recognized each other’s telegraphic “fist.” Presumably, Thomas was living in Piermont not far from Belle, so an in-person meeting was easily arranged. Their online communication bore actual fruit when they met, since they were married on March 26, 1913.

Life at the Piermont station

Thomas transferred to the Piermont Station after they were married, sharing the work and the upstairs apartment. They had a son, Thomas Jr., in 1915. Their jobs were 24/7. In the early days of the 20th century, the station had no running water. Young Thomas remembered coming home from school “to make kindling and haul water from a nearby house.” As station managers, Belle and Thomas were responsible for selling tickets and keeping track of incoming and outgoing baggage, including for many who visited the Fort Comfort Resort in Piermont.

The couple were noted for preventing a train wreck when Thomas noticed that an inexperienced operator had sent a 12-car passenger train southbound on a collision course with a northbound train. The two went out, one in each direction, to flag down the trains and avert a collision. 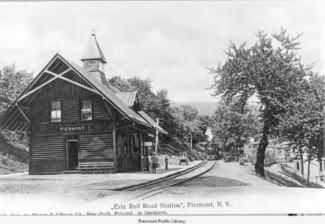 Piermont station around the time of the robbery. Courtesy of the Piermont Library

Robbery at the Piermont station

In May of 1913, two months after Belle and Tom were married, Alfred Banker of Bridge Street, in Nyack, was seen in local saloons spending money that others thought the father of two children didn’t have. In fact, Banker and Frank Smith, who had been arrested for robbery once before, were soon arrested for robbing the Piermont station.

Belle had visited Thomas in Nyack and returned to her apartment by a late train, finding her apartment broken into and robbed during her absence. She reported the robbery to Officer Hickey who learned the two men had been in Piermont that evening. By midnight, the two were arrested, pled guilty, and returned the money. Smith was arrested a few weeks before after robbing the station and stealing some $20.

A sad ending, a reunion, and a renovation 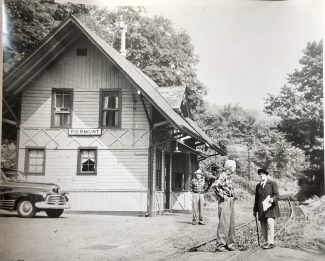 Piermont Station in the 1950s with Tom Kelly. Courtesy of the Piermont Historical Society

Unfortunately, the marriage kindled by an online romance did not last long. Thomas was to die as a young man, at the age of 30. Belle and her son Tom continued to live in the station house while Belle worked as station agent and telegraph operator. In the late 1930s, she transferred to the Englewood station on the Erie line and then worked for 19 years at the Rutherford, NJ station.

In 1966, the Northern Railroad line to Nyack was shut down and the tracks were taken up. The Piermont station was empty. In 1969, Belle and the younger Tom Kelly rented the empty train station, never having lost their affinity for another time. Belle purchased the station in 1971 and transferred full ownership to Tom in 1974. Tom renovated the downstairs waiting room for his aging mother. Belle lived there until she died in May of 1976.

Tom lived in the station house until he died in 1996. The station was purchased by the Village of Piermont in  2006.

In today’s world, we may think we discovered pretty much everything, including online dating. Technologies come and go but love remains forever. Our very own early Orangetown romance between Belle and Thomas brought a wired cupid to our county. Their romance became forever linked to Piermont, telegraphy, and the railroad. The Piermont train station, renovated by volunteers and now the museum of the Piermont Historical Museum, is a fit memorial to one of earliest online Valentines imaginable. 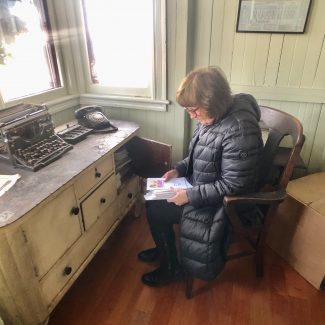 PHS President Barabara Schuelen in the old ticket booth that also served as the telegraph station. 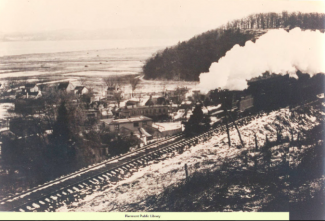 Steam engine headed into Piermont Station with the Piermont marsh visible in the distance.

The Museum is open on alternate Sundays May – November. Please check Piermonthistoricalsociety.org for more details. The museum exterior may be viewed from the Old Erie Path, an unpaved hiking and biking trail that runs from the Esposito Trail in South Nyack through Grandview to the Piermont Station along the old railroad bed of the Northern Railroad. The path connects to the southwest of the Piermont Station with the Joseph B. Clark Rail Trail in Sparkill. The trail is open year-round.