Earth Matters focuses on conservation, sustainability, recycling and healthy living. This weekly series is brought to you by Maria Luisa Boutique, and Summer Arts & Play Program at Blue Rock School.

Ever get distracted by a shiny object? Artist Aurora Robson has. Painting in her pre-chi-chi Williamsburg, Brooklyn studio a dozen years ago, she noticed a shine bouncing off some discarded plastic bottles lying mangled on the sidewalk outside a neighboring cement factory. “People would just dump their garbage on the ground, and the plastic bottles resembled the colorful blob-like forms I was painting,” said Robson. “I just started messing with them, and thought  that maybe I could do the same thing as my paintings, but in three dimensions.” She paid a double bounty to the neighborhood deposit-bottle collectors. “It was crazy! They’d show up at my studio at all hours and shout: ‘We’ve got more bottles for you!’”

The rest is living history. Toronto-native Robson has called the Hudson Valley home for quite a while, and has developed an impressive resumé as a sculptor using plastic waste from the street and recycling bins.

“Plastic waste is really a public health issue,“said Robson, who still uses only waste material before it can become ocean debris. “I want to bring it to people’s attention without aggravating them, so they might think ‘Hmmm, maybe I should get my own reusable tote bag. Is it that hard?’” 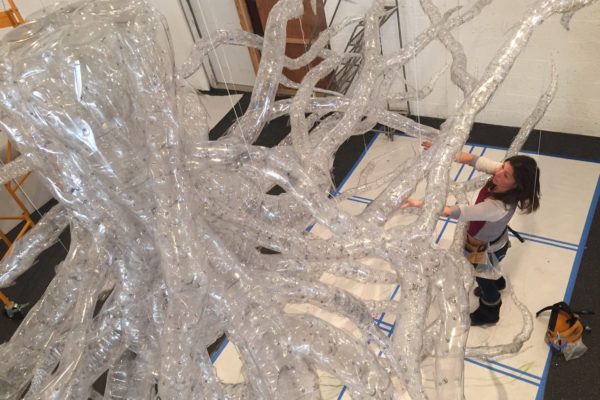 As her eco-art grew into a consuming passion, Robson founded Project Vortex in 2011, a labor of love and solidarity that brings together creators of art-from-discards and community clean-up groups around the world. This project, and her dedication to diverting plastics from the waste stream, are the subjects of Robson’s 2013 Tedx-Talk Trash + Love illustrated with her massive public art installations made from hundreds—even thousands—of bottles and other petroleum-based discards. “You know, I just scour the news on this topic,” said Robson, “and what I feel like making is what I feel the world needs to see.”

In a well-timed art-meets-science moment, the journal Nature last week published a report on the exponential growth of the Great Pacific Garbage Gyre (GPGP), a swirling, twice-the-size-of-Texas island of plastic debris between California and Hawaii. The patch was first noticed in 1997 by oceanographer Charles Moore. It’s been under scrutiny every since, and so have the sources of plastic in water, from discarded fishnets, plastic bags, bottles and straws, down to tiny beads and fibers that flow unchecked through wastewater treatment plants.

To learn more about impact of these aqueous remains, EM spoke with Dr. Beizhan Yan, Associate Research Professor and aqueous geochemistry expert at the Lamont-Doherty Earth Observatory in Palisades. Yan and his colleague Dr. Joaquim Goes have lately been studying the Hudson River and NYC Harbor for the distribution of those little plastic microbeads found in cosmetics and other rinse-off products. 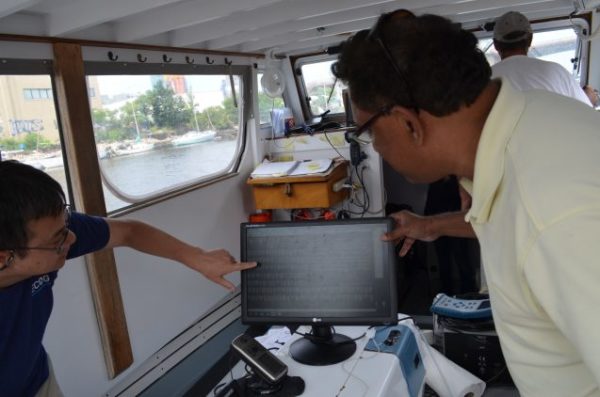 Yan was happy to report that the Microbead-Free Waters Act of 2015 finally took full effect in January, prohibiting the manufacture and sale of the microbead-containing consumer products, like toothpaste and facial scrubs. “This will be very effective,” said Yan. “But since there are products still around in people’s homes, it will probably take several years to see that positive effect.”

But even this upbeat news is tempered by a life-cycle fact of plastics, large or small: “We’ve banned the microbeads, but we haven’t banned the use of single-use plastic bags, which break down in the environment as well, some of them eventually reaching similar  particle size as microbeads,” said Yan.  And what’s the single worst effect of all these microplastics? “Whether it’s microbeads or degraded particles, sea creatures and marine birds consume them instead of food, and thus starve, so the bad ecological effect is there.”

Indeed, in one study led by Dr. Goes and Debra Magadini, a high school teacher, microbeads and other tiny plastic fibers were found inside shrimp, oysters and clams. From there, they can climb up the food chain and, yes, right onto your plate. And while the new U.S. and existing or proposed European bans are important steps, there’s still a long way to go. “If China and some other Asian countries don’t ban microbeads, they’re still getting into oceans,” Yan said. “But the good news is that many countries, including China, are now paying attention, and starting research to figure out the distribution and ecological toxicity of microplastics in the their coastal areas and the open seas.” 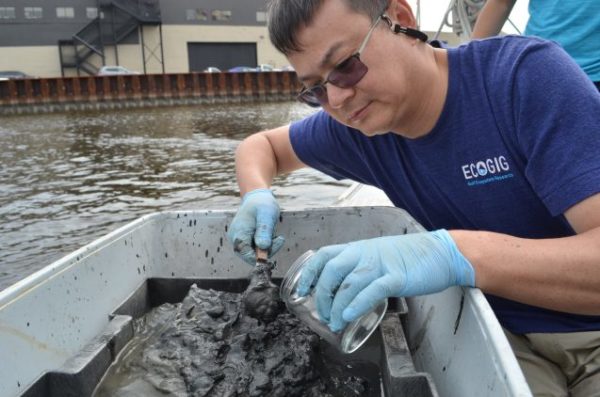 Dr. Beizhan Yan samples the muck of intensely polluted Newtown Creek which separates Brooklyn from Queens. It will go back to the lab for analysis. Photo: Kevin Krajick for Lamont-Doherty Earth Observatory

Yan also noted that China has recently banned the import of plastic wastes, which is already causing a build up of garbage at recycling plants in some western countries. “Some of these wastes have now been redirected towards Southeast Asia. However, eventually western countries need to deal with their own waste, rather than pollute other regions,” he added.

Next steps for science and art?

With the support of Columbia Earth Institute and Riverkeeper, Drs. Yan and Goes and their crew will continue their work tracking microplastics in local waterways this summer, expanding it to the Long Island Sound. They’ll also be taking a deeper look at the way  microplastics pick up and transport pharmaceuticals and other toxins.

Next up for Aurora Robson is a large outdoor sculpture project for the Arboretum at Penn State University, using plastic waste from their trash transfer station. She’s already hard at work on the project, which will, once again, gently force viewers to consider her mantra: “Waste is merely displaced abundance.”

Divert plastic waste by bringing your own bags to the supermarket, or any store. Collect plastic bags and film at home and bring them back to the supermarket or big box store for recycling. Never put them into curbside recycling. They clog recycling machinery, wasting time and money, and are hazardous to workers. 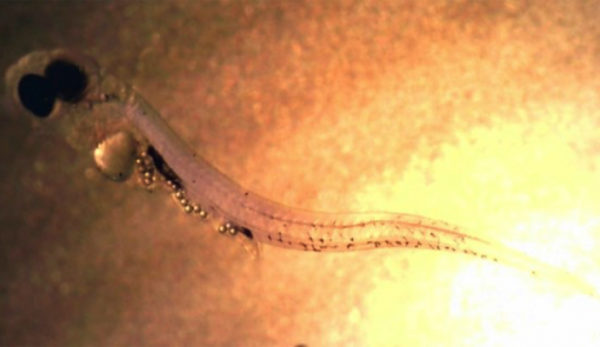 To intercept ocean plastic, join a local waterway cleanup project. There are several coming up in April and May, sponsored by Keep Rockland Beautiful and Riverkeeper.

Governor Cuomo’s task force on plastic bags issued their 86-page final report in 2018, finding that “Single-use plastic bags are a detriment to the health of communities and the environment alike.” Now is the time to encourage your Albany lawmakers and the Governor to consider options for replacing plastic bags with sustainable alternatives.

Keep tabs on entrepreneurs who are creating value by diverting plastic waste from waterways. International organizations, and just folks, are creating useful items out of discarded plastic bags. Did you know that your bathing suit is a microfiber bomb? Connect with a bathing suit maker who uses fibers that shed minimally or not at all. And be careful with your fleece clothing. The tiny poly fibers flow through the washing machine and wastewater treatment, to get ingested by sea creatures . . . and people. 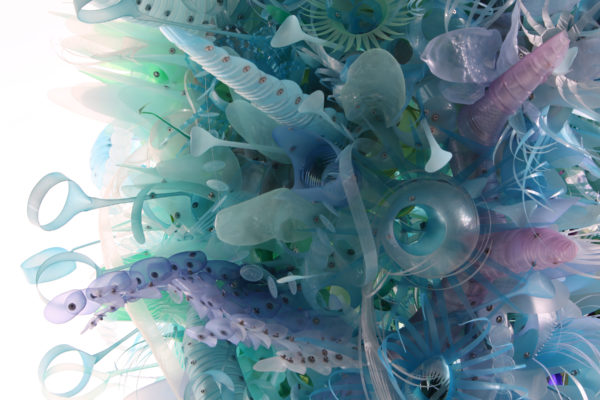 Want to learn more about climate change and how our actions as individuals, families, communities, and governments will determine how fast climate changes in the future? On Feb 20 from 6-8p, the Lamont-Doherty Earth Observatory’s Public Lecture Series: Our Changing Planet will feature Climate, Carbon Dioxide, and Sea Level: Past is Prologue given by Maureen Raymo, Bruce C. Heezen Lamont Research Professor and Director, Lamont Core Repository.

Earth Matters  focuses on conservation, sustainability, recycling and healthy living. This weekly series is brought to you by Maria Luisa Boutique and Summer Arts & Play Program at Blue Rock School. 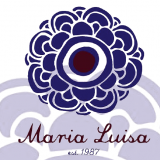