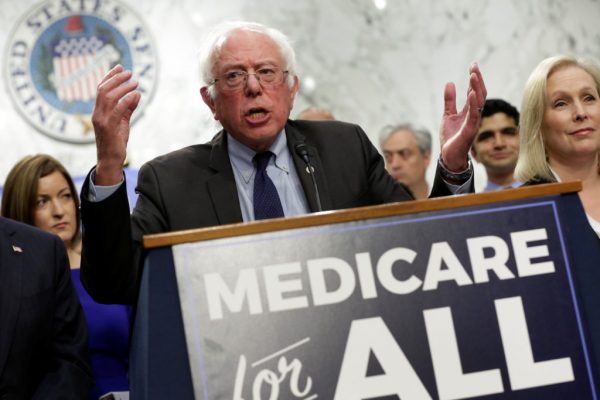 Senator Bernie Sanders (I-VT) speaks during an event to introduce the “Medicare for All Act of 2017” on Capitol Hill in Washington, U.S., September 13, 2017. REUTERS/Yuri Gripas

On June 22, 2019, a 24 year old named Jada Louis died due to complications from diabetes. Louis had been skipping her insulin because the medication had become so expensive she could not afford to both pay for it and pay her rent. Sadly, Louis’ story is a tragedy all too ubiquitous in the United States–the only country in the developed world that does not guarantee its citizens some type of universal healthcare.

Healthcare in the US is beholden to a private insurance industry which makes billions of dollars in profit every year–$56.6 billion in 2018 alone–from sick and dying Americans while millions of others go uninsured. Any American who has ever had to see a doctor knows how painful navigating the US healthcare system can be. And it’s not as though the complications result in better results. The United States spends more than $10, 200 per capita on healthcare, while Switzerland, the closest comparison, spends $8,000. The comparable country average is $5,280.

While the US spends double the comparable country average and more than any other developed country, we rank 34th in life expectancy at birth and have the highest rates of infant mortality, low birth weight children, and maternal mortality of any country in the developed world. All of this points to an over-bloated and highly inequitable system that costs us trillions but does not improve the health of the vast majority of Americans. When confronted with the statistics, it becomes hard to defend a system that costs more and produces less than any other comparable country.

The primary arguments against universal healthcare in the United States are economic in nature: that it would simply “cost too much,” or that it would substantially raise taxes on middle class Americans. Yet study after study has shown that Medicare for All would save trillions of dollars while also saving poor and middle class Americans substantial amounts every year. Unlike current private insurance premiums, which are the same regardless of income, a Medicare tax would be progressive: individuals would pay based on ability. As Emmanuel Saez and Gabriel Zucman, economists at UC Berkeley, note: Medicare for All would actually reduce taxes for most Americans. Instead of forcing all employees at a company to pay the same premium regardless of income, a Medicare tax would have the janitor paying one rate and the executive paying another, effectively saving lower and middle class Americans thousands every year and resulting in the “largest take-home pay raise in a generation.”

The real barrier to Medicare for All in the US is not low public opinion. Rather, it’s opposition from insurance and pharmaceutical industries, and politicians beholden to industry interests. Recent polls show that over 70% of Americans are in favor of Medicare for All.

In the richest country in the history of the world, plenty of money exists to pay for universal healthcare. There was no discussion of financial infeasibility when $17 trillion of taxpayer money was spent bailing out Wall Street firms that plunged the US into economic recession and cost middle class and poor Americans their homes and savings. There was no talk of financial infeasibility when Republicans slashed tax rates for billionaires and multinational corporations (projected to cost over $2 trillion). To argue that Medicare for All is economically infeasible while 41% of working age Americans are paying off some type of medical debt, 45,000 Americans die annually due to lack of healthcare, and another 30 million are uninsured is not only nonsensical, but morally bankrupt. As Harvard Physician Adam Gaffney writes, “the real stumbling block is not that single-payer [healthcare] advocates’ arithmetic is poor, it’s that American politics are dominated by the rich.”

Indeed, it is in no small part due to the healthcare and pharmaceutical industries’ lobbying that the health system we have is as broken as it is. In 2018, over $567 million was spent on health lobbying and every attempt at healthcare reform has been dominated by money and special interest groups. Studies have indicated that universal coverage improves health across the board and that access to universal coverage is positively correlated with life expectancy. Providing healthcare to all Americans would be a straightforward way to drastically improve this country’s health while also addressing equity. It is time that we do away with for-profit healthcare and transition to a system that makes healthcare a human right guaranteed to every person in the United States.