We are delighted to see New York Governor Andrew Cuomo has proposed bringing eBike state law into line with federal law, but there are some curious complexities he’s added to this legislation.

But first: why would anyone want an eBike? Rather than an ordinary bicycle?

Cycling in hot or hilly areas can be very challenging. A short trip to the shops and back if you live at the top or bottom of a steep hill is miserable. With hills and heat any kind of injury or strain, or lack of fitness, excludes cycling as a part of life. Which is a shame as cycling is such a joy, physically, practically and mentally. 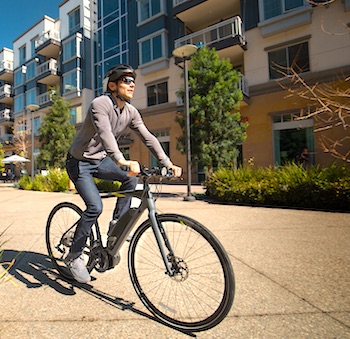 eBikes solve this by adding electric power to the pedals. You still have to pedal (mostly, see below on classes of eBike) but the additional power flattens the hills and makes you feel super fit. They are a joy to use. You can dial in the level of exercise you want without straining and overworking. End result? eBike owners ride their bikes much more than the average cyclist – and use them as practical transport as well as a workout. Though the exercise intensity is less, the duration is much higher.

Class I eBikes, which are pedal assist vehicles that can go up to 20 mph, have long been legal under Federal Law & are now street legal in New York City under State law. Cuomo proposes expanding this across the State. Class II (pedal and throttle bikes) were illegal in NYC but covered under Federal Law elsewhere. Class III (up to 25 mph – Cuomo definition rather than 28 mph national definition) would be allowed too. It’s all good until you read the fine print:

If your image of the typical eBike user is a delivery person in the city, this might make sense. However, that’s only a small subset of eBike riders. eBikes are both hyper-efficient transportation and great fun as recreation. In communities which say they take climate change seriously why would you want to restrict a form of transportation that lets commuters travel 50 miles on 5 cents of electricity? That’s 2,000 Miles per Gallon equivalent!

Let’s look at each of the proposed restrictions individually.

Letting municipalities ban eBikes arbitrarily makes as much sense as letting a village ban SUV’s from its roads. An SUV is a type of car. An eBike is a type of bicycle.

Best practice says that people should wear bicycle helmets. But that doesn’t make cycling next to two ton vehicles any safer – infrastructure and enforcing existing safe passing laws will do that.

Finally this is a free country! Are we not entitled to freedom of choice? Most European countries do not have mandatory helmet laws as this reduces rider uptake.
?

I am aware that there is much discussion and ill-feeling around delivery riders driving eBikes dangerously. Ignoring stop signs, running red lights, endangering people. I suspect some of these changes are to address this. But why blame the vehicle? If anyone, regardless of color, creed, being on a bike, eBike or in a car endangers people by ignoring road signs etc they should be ticketed or their vehicles confiscated. Citizens have the RIGHT to use the roads, but a DUTY to follow the regulations. This is clear, established law. It should be applied equally and without prejudice.

Full disclosure: I have been riding eBikes for 8 years – both in NYC and all over NY State. They are a wonderful way to travel. No parking, no hassle, super green, and still a very satisfying workout. I loved them so much I opened a shop dedicated to them; I now have hundreds of very happy customers who LOVE their eBikes, and use them all the time.

Let’s have a simple statewide solution. Let’s allow these light, clean, green machines to help people enjoy the fresh air, while reducing parking and pollution problems into the bargain.

Edward Busk is owner of Sleek eBikes in Tarrytown