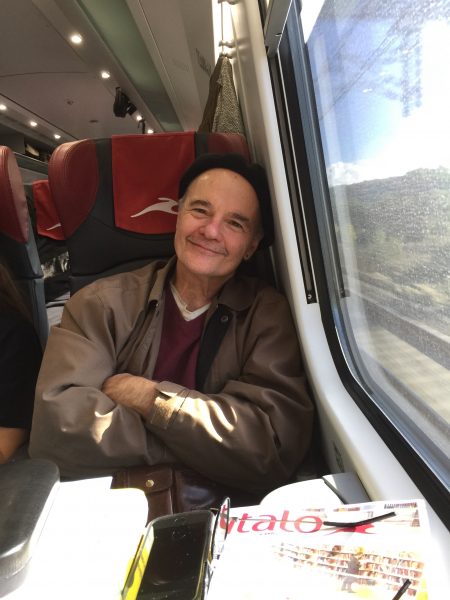 The first time I encountered Ric Siler’s playwriting, I was in my first year of college, having just taken a gap year. I was struggling to decide what and who I wanted to be, what it meant to write, what it meant to perform, where the lines were drawn. So, in 2012, I went to a one act play in my hometown: Ric Siler’s Old Hickory, at the Nyack Village Theater.

Ric’s performance was the first time I’d ever seen a playwright perform their own work, and I was quickly drawn into the piece. Old Hickory is a ‘Hillbilly Gothic’ play that was featured in the Woodstock Fringe Festival, and it begins and ends with a man sharpening his knife at the kitchen table. The narrator takes the audience on an exploration of how he ended up sitting in his chair onstage, debating the ways he might use his knife. After the play, I decided to ask Ric a few questions on the mutuality of being an actor and a playwright, but then I wasn’t sure what to do with the piece. Publishing was new and overwhelming idea to me. But I went back to college with some of the best advice I’d gotten on writing: forget how to write and remember how to speak.

Years later, I returned to Nyack and learned that Ric had a new piece he’d written about his recent prostate cancer diagnosis. A few days later, he sent me the play, and his storytelling felt urgent as ever–a voice concerned with small moments of humanity. We decided to revisit our conversation from almost ten years ago as he prepares to perform the piece at the Hudson Valley Performing Arts Laboratory in Poughkeepsie on 1/31 at 7p as a part of the Dramatist Guild’s Footlights Series alongside solo pieces by playwrights and performers Bette Carlson Siler and Wallace Norman.

What came first: being an actor or a playwright? How did one evolve into the other?

Ric Siler: I always wanted to act, for as long as I can remember. Growing up in a small town in West Virginia, though, I didn’t have many opportunities. I did write some short stories and poems in high school, so that was lurking in there as well.  It was only much later that I started to play around with writing plays some. I didn’t really know what I was doing. When I finally moved to NYC it was to act. I started writing seriously after I wrote a monologue for an audition, for which I was ultimately cast. That play was The Trip to Bountiful with Ellen Burstyn, who lived in Upper Nyack, which is how we found Nyack. I started writing consistently on the train commuting to NY.  Fast forward years later and, not having acted for a while, I decided to write pieces for myself to act in… so I guess it has come full circle! Oh, and by the way, that monologue that I wrote that started the whole thing ended up being in Old Hickory, the part about my grandfather who was a farmer.

Being cognizant of the stage must influence how you write. What elements of the stage do you remain aware of when composing a play?

While you have to be aware of the limitations of being on a stage, you have many possibilities as to what you can do with lighting, sound, and set design. Taking Old Hickory as an example, my original image for starting the play was the sound of a knife being sharpened in the dark and the lights rise on our hero getting ready for what he must do. I wrote the various scenes of that play without really knowing how they would be realized, but then collaborating with good directors and lighting and sound people can make magic happen.

What genres and playwrights have influenced your work? Do you have a favorite stage or film experience?

My favorite plays are Uncle Vanya, Hamlet, and anything by Samuel Beckett (specially Waiting for Godot). If I ever write a play half as good as Our Town I’ll die a happy man. Stage experiences that I’ve seen that stand out are a Lithuanian theater company’s production of Uncle Vanya, in Lithuanian, by the way, with simultaneous translation; the Gate Theater Company’s production of Waiting for Godot; Angels in America; and a recent revival of Our Town at the Barrow Street Theater. But there are many, many others. I think you are influenced by everything you see or read either consciously or subconsciously.

How are characters in a play treated differently than in a piece of fiction?

Characters in plays are discovered through what they say and do and how they go after what they want. In fiction, you can go inside their heads and know what they are thinking about. I think that makes plays the greater challenge, as it’s a delicate balance in how to bring the characters to life and do it in a way that is alive and interesting.

What advice can you, as an actor, give to writers?

Writers should remember that the words they are saying are going to be coming out of people’s mouths and should sound like it. Too often writers try to get their big ideas out without really stopping to think about that. What the characters say should move the story forward, and not be the writer just trying to sound smarter than everyone else.

With that in mind, when you began writing this new piece after your prostate cancer diagnosis, were you imagining performing it throughout?

I just decided from day one that I would keep a diary of what happened and follow it wherever it led. When this whole adventure started, I didn’t know what would come of it. I just had a sense that there might be a story worth relating. If I had gone for the biopsy and there were no problems there would have been nothing to write about. Of course, my idea was a solo piece which I would perform, since I have written and performed several, but none that were directly about me. With the twin paths of the health questions plus the trip to Italy we had just planned it seemed too ripe to ignore.

Did the writing process feel connected to your healing?

I don’t think it did as it was happening, but since I was taking notes along the way, I found myself noticing things differently. Paying attention. Noticing details, things I would want to include in my notes at the end of the day. Looking back on it after the fact, I know just how lucky I am. If my GP hadn’t suggested that blood test I would still have cancer growing in my body and it would have been a bigger problem five or ten years from now. So while the writing may not have taught me about healing, it made me a participant in a completely different way than I might have been otherwise.

I’m curious how you see this play being in conversation with speaking more openly about prostate cancer. What do you wish more men knew? Or that you might’ve known?

That really is one of the things that I hope will come from this piece, the awareness of prostate cancer and how important early detection is. The input of my friends and co-workers can’t be overstated! I wouldn’t have found the doctor at Mt. Sinai if my buddy at the Y hadn’t known someone who had survived prostate cancer. And of course, the man I work for, also a prostate cancer survivor, took me under his wing and gave me incredible support when I needed it most. Both were vastly important. And I want to be there for others as well, and hope this piece may be one way of doing that. It already has, in fact.  When I did a reading of it last May in the city, a lady took me aside afterwards and told me, “This is very important, men don’t talk about this except in whispers.” I also reached out to the Prostate Cancer Foundation and they interviewed me for their website as well.

Family is central to the piece, and the way a vision might center us during a traumatic event or disease. What might you say to those who struggle to find a vision or a grounding element during illness?

The support of my family was incredibly important, both in supporting me and in giving me a kick in the butt when I needed it! Going to Italy six weeks after the operation and not knowing what came next was a nice way to put things in perspective.  Being in the room with masterpieces that were hundreds of years old does helped me see things in a different way; people who are long gone created these pieces and they will live forever through them. That was an amazing experience while engaged in what I was fighting. At the time, I thought the lion’s share of my medical adventure was behind me… little did I know! As to the second part of your question: I would say the important thing during this kind of illness is to be as positive as you can. Fight as hard as you can and stay engaged. You never know where inspiration or support will come from. I read Don Quixote for the first time while I was going through this and I found a quote that became very important to me: “After the darkness I hope for light.” That resonated in a big way.

Juliana Roth is a writer, educator, and performer whose writing has appeared in Irish Pages, Entropy, Stirring, Reckoning, among others. She serves as the Chief Storyteller for the Edward Hopper House Museum & Study Center in Nyack, NY. See more of her work here: www.julianaroth.com
In this article:Ric Siler