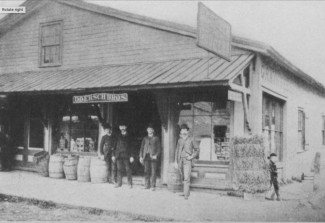 Circa 1880, the only known  photo of the Doersch Brothers grocery store in the Wigwam at the corner of Broadway and Church. 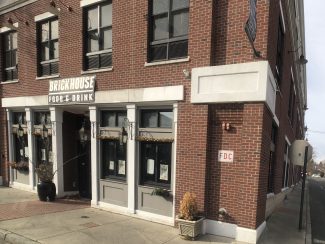 Fireworks lit up the Nyack night sky in 1868 after a political rally at the Wigwam, located on Broadway where the Brickhouse Restaurant is now located. The Wigwam was the community center of its day and counted a meat market, grocery, stable, and meeting hall among its businesses. Political rallies, speeches, and music were heard in the halls. It hosted bicycle races. Horace Greeley gave a speech from its front porch to some 1,500 people during the 1868 campaign.

Yet, the only known photo is of an unimpressive building looking more like an aging western saloon than a thriving indoor mall. Nyack was not the only local place to host a wigwam; Haverstraw and many American cities had contemporaneous buildings of the same name.

The term wigwam is derived from “wikewam,” an Algonquin word for a dome-shaped Native American dwelling. The term was used by the Philadelphia Tammany Society for its meeting site as early as 1789. Just about any political meeting around the time of the Civil War was referred to as a wigwam, especially in New York City. Tammany Hall meetings were often called the Tammany wigwam, the word Tammany itself being derived from Tamanend, a leader of the Lenape. 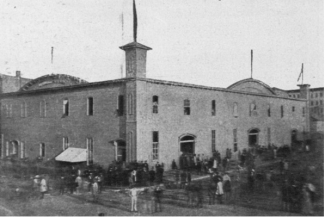 The word wigwam was also a derogatory term for a cheaply made building. Large, temporary wooden buildings used for political rallies thus became known as wigwams, perhaps with a dual meaning (as not only a meeting place but as a reference to the Whig party that morphed into the Republican party in 1856).

In 1860, a large, temporary wooden building called the Wigwam was erected in Chicago in only five weeks to house the Republican Party convention at which Abraham Lincoln was nominated for the presidency. The impressive two-story structure near the Chicago River at Lake Street held 12,000 attendees. Windows along three sides provided fresh air for the densely packed attendees. After the convention, the hall became the site of a number of businesses before it disappeared, perhaps in the Great Chicago Fire of 1871.

The Nyack Wigwam was built in 1868 by refurbishing a large shed that existed south of the Reformed Church fronting Broadway by A. L. Christie. The Christies had a house just south of the Wigwam on Broadway next to the Presbyterian Church (now the Nyack Center) that sported the town pump for watering horses. In some newspaper accounts, the meeting hall within the Wigwam was called “Christie’s Hall.” Christie also ran a stable across Liberty Street from the Wigwam that made carriages and sleighs. 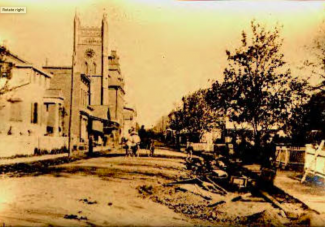 1873 photo. This view looks north from a point approximately in front of the Nyack Center. The roof and porch of the Wigwam can be seen on the left between the two-story brick building and the church, just to the left of a wagon

Aside from churches, meeting hall space was scarce in Civil War-era Nyack. The Union Hall on the second floor of the Union Building on Main Street hosted small meetings and Civil War soldier musters. On the first floor were businesses that sold stoves, clothes, shoes, and groceries. Nyack grew quickly from 1819, when the village sported seven homes, to 1870, when its population totaled 3,438. Suddenly, common space was needed, and “Christie’s Hall” filled the bill.

Greeley at the Wigwam 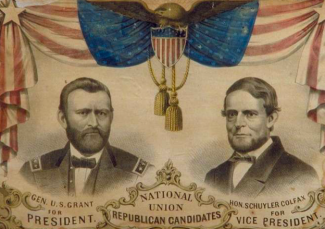 Next to Lincoln and Grant, Horace Greeley was one of the major voices of the Civil War era. Greeley was a publisher and accomplished speaker for the abolitionist cause. As a Lincoln supporter, Greeley was a strong voice for impeachment and removal of Andrew Johnson in March, 1868. In September before the election, Greeley held “an immense Republican gathering!!” at the Wigwam. Greeley had spoken once before at the Wigwam in 1860, but not to a crowd of this size.

The appearance of a national figure like Greeley was a big deal for the small village of Nyack. Officially in Nyack, the occasion was kickoff for the 1868 Republican ticket of Grant and Colfax for the presidency. Estimates of the audience ranged from 1,200-1,500 with some 300 being turned away. Others crowded the windows and roof of the Wigwam.

The Nyack Glee Club opened the meeting. Greeley spoke for 90 minutes, covering American history from the Revolution through the Civil War. The Rockland County Journal recorded that the audience gave Greeley a standing ovation plus three cheers for Greeley and three cheers for Grant and Colfax. At the end of the meeting, fireworks were shot off. The Tarrytown Club reported hearing cheers half a mile from shore as they traveled home on the ferry. 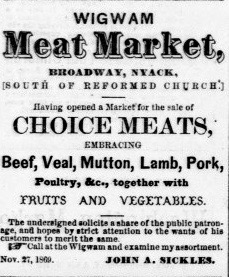 Newspaper ad for the Wigwam grocery

At the same time that 1,200 people crowded the Wigwam to see Horace Greeley, the building also housed a meat market and grocery. As other grocers held sway in attractive brick buildings, Christie dressed up the Wigwam by adding a fancy awning over the front porch. In 1870, William Jersey opened a flour, feed, hay, straw, egg butter, and cheese store in the Wigwam building. 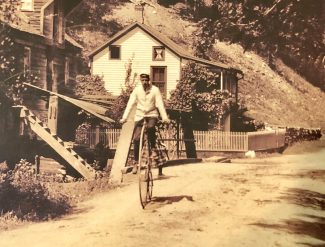 A boy riding a velocipede on a dirt road at Rockland Lake village circa 1880s. Courtesy of Historical Society of Rockland County.

The Wigwam also housed a velocipede rink. Velocipedes, otherwise known as penny-farthings, were newly invented English bicycles with large front wheels. Mr. White ran a velocipede school in the Wigwam and rented out bikes for $.20/hour. Spectators could watch cyclists for $0.25. The race winner was Irving Smith, and he won a silver goblet. Charles Pike won a leather medal for finishing last. Corneil Christie took the challenge of whether a runner was faster than a cyclist, winning the challenge by 16 seconds.

The velocipede school was short-lived. Parishioners at the Dutch Reformed Church just across Church Street had been annoyed at the “thundering sounds” that issued from the rink every night. The Rockland County Journal noted that cycling engrossed the attention of young men to exclusion of almost everything else–just like baseball, invented two years before.

The 1869 school graduation was held in the Wigwam. A large stage occupying the south side of the building was decorated with evergreens and flowers with dressing rooms to either side. Acrobatic performances seemed to please the full auditorium more than speeches and recitations. 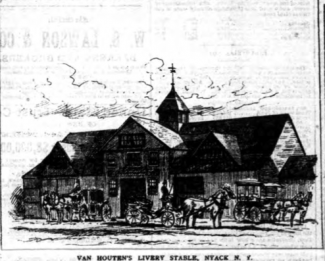 The elegant Van Houten Livery that occupied the back half of the Wigwam at the corner of Liberty and Church.

Concerts such as those by the Tremaine Brothers played to large audiences. The concert used a combination organ that combined the sound of eight different musical instruments.

A.L. Christie was appointed postmaster by Abraham Lincoln and held the post until at least 1878. The post office was located in a number of buildings during this time, including in the Wigwam.

The times, they are a-changin’ 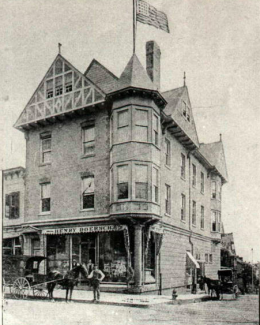 Doersch Grocery on the corner of the Doersch Building at the corner of Broadway and Remsen, across from the old Wigwam. Courtesy the Nyack Library.

The Wigwam auditorium was used less and less after the nearby Opera House opened its door for musical and dramatic performances and meetings of all kinds. Doersch Brothers was still in business in 1891, selling products from the Elgin Creamery. Charles, one of the Doersch Brothers, died in 1884.

Henry Jr. (Henry Sr. ran a shoe manufacturing business and a retail shop) ran the store that sold groceries and flour. In the late 1890s, Henry Doersch constructed an impressive new Victorian building across the street on the southeast corner of Remsen and Broadway, where the Key Bank is now located. The grocery was relocated, and renamed Henry Doersch.

Van Houten’s Livery Stable, Nyack’s largest, occupied the back half of the Wigwam property in the early 1870s, And by 1891, Van Houten owned the entire building known as the Wigwam. No other mention is made of a store in the Wigwam or of the Wigwam itself after 1891. The building must have been on its last legs as evidenced by the decrepit condition in the photo.

The Broadway Theater, The Tappan Zee Playhouse, the Brickhouse Restaurant 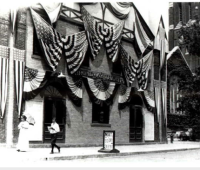 Left vacant, the building was restored and given new life as the Tappan Zee Playhouse, which showed summer stock productions in which major Hollywood and Broadway stars appeared. The theater was active from 1958 to 1970. Then the building was again left vacant. Attempts made to fund a renovated theater during the 1980s and ’90s fell short of the goal, and the building was demolished in the early 2000s.

The magical days of the Wigwam, which housed so many different businesses and hosted so many important village meetings, are long gone. We can now only imagine fireworks bursting in the night sky above the Wigwam, the indoor mall and vital community center of its day.