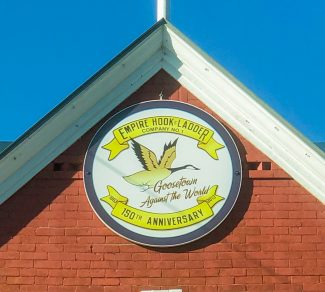 When we think of geese, if we think of them at all, it is usually as annoyances populating parks, lawns, and golf courses. Maybe we stop to marvel at a flock of Canada geese flying in their distinctive V-shape. So how did Upper Nyack get to be known as Goosetown? And why do villagers take such pride in the slogan mounted on the Empire Hook & Ladder firehouse, “Goosetown against the World”?

Two legends have oft been retold to explain the Goosetown name: The story of a colonel who walked his geese daily down to the Hudson River and the story about villagers walking through narrow snow paths like geese. Are either of the legends true? When did they come about? And how did the phrase “Goosetown against the World” arise? 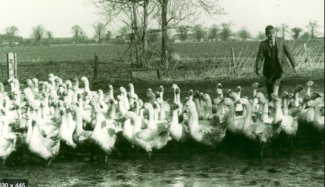 Countless neighborhoods in American towns are referred to as Goosetown, mostly because they were places where flocks of geese were raised for commercial markets. Many have become historic districts. Many are associated with German immigrants, as in Iowa City, Cincinnati, Chillicothe, Lacrosse, Akron, and Los Angeles near where the port is now located.

It has never been recorded that geese were raised in Upper Nyack for commercial purposes. So, the appellation of Goosetown cannot have been applied to Upper Nyack in the same way it is used elsewhere in America. 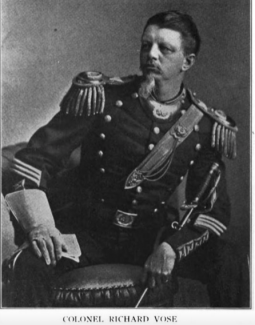 Legend has it (repeated by Wikipedia) that Colonel Vose walked his geese daily from his large second-empire estate known as Vose Villa on what is now Highmount Terrace to the Hudson River. Vose was a wealthy, distinguished man who served as the second mayor of Upper Nyack. He made a fortune in the car spring business and served in the National Guard from 1858 to 1884 where he earned the rank of Colonel. He built Vose Villa in 1888.

If the story is true, a distinguished senior crossing Broadway twice a day with a flock of geese would have been a touching and humorous sight that people would remember. Geese flocks were once driven to market by gozzards (geese herders), so it’s possible that Vose would know how to drive geese. Domestic geese, different from Canada geese, have either forgotten how to fly or are “pinioned”so as not to fly away.

It’s possible that Vose made the long round trip once and awhile with his geese. It’s hard to imagine herding geese once they were afloat in the river, but a food whistle, as it is still used in the Perigord region in France today, would get the geese heading home lickety-split.

The first recorded mention of our Goosetown appears in a letter to the editor in the Rockland County Journal of 1887. The letter is a criticism of those who support plans for creating a horse railway on Broadway from Nyack to Upper Nyack at the corner of Broadway and Castle Heights and perhaps extending to Hook Mountain. The writer envisions ruination of Broadway, the only macadamized road in the Nyacks, by railroad tracks, switches, turntables, and turnouts. The Upper Nyack supporters, according to the writer, were only in it from for the money and inhabited “the borders of the romantic region of ‘Goosetown’.” Therefore, the name Goosetown was in use before Vose took up residence at Vose Villa. He still may have walked his geese, but it’s not the origin of the name.

The second legend has it that Goosetown refers to walking in snow. Upper Nyack villagers were known to be great walkers, especially on the way into Nyack, about 1/2 of a mile from Castle Heights to Main Street. Villagers walked in all kinds of weather. When snow became heavy, only a narrow path was open in the middle of Broadway. The people in Nyack watching them coming down the road used to say that they waddled like a bunch of geese.

Goosetown against the world

The term Goosetown might have been lost if not for its popularization by the Empire Hook & Ladder Company which first occupied its marvelous brick building on N. Broadway in 1888, about the time the term was coined. In 1909, the Hudson-Fulton celebration took place, commemorating the 300th anniversary of Hudson exploring the Hudson River and the 100th anniversary (actually 102 years) of when Fulton took the first commercial steamboat up the Hudson River. The celebration was a big deal in Nyack. 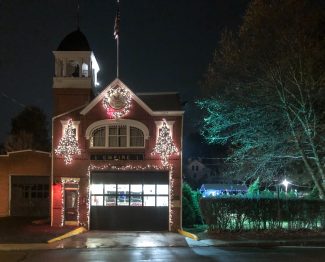 The camaraderie of firemen took over and Nyack’s Jackson Hose Company invited them to parade as their guests. According to Virginia Parkhurst, a Journal News writer and historian, Empire accepted and marched in the first division led by a jackass with a bright red blanket flaunting the slogan, “Goosetown against the World.” The name Goosetown became memorialized almost as a battle cry. The slogan can be seen today in a round medallion on the second floor of the firehouse.

The us vs. them struggle implied in “Goosetown against the World” resurfaced in a 1947 fight over making the 7th and 8th graders from the Upper Nyack School go to the school. Upper Nyack was fiercely loyal to its school. At a meeting to decide the issue, Mrs. Winston Perry (mother of the current Upper Nyack historian Win Perry) mentioned that the school would lose funds because the state paid school districts a sum determined by headcount. When the vote of 90 to 37 in favor of retaining grades 7 and 8, an audience member yelled out, “Goosetown against the world.”

The best guess as to how Upper Nyack became Goosetown is from those waddling walks to Nyack in the snow. The goose walks of Colonel Vose, if true, reinforced the image. But the Goosetown reference is at heart something more. The description of geese by Paul Theroux in Living with Geese fits Upper Nyack villagers’ concept of Goosetown:

One of the most interesting aspects of a flock is the way it accommodates so many different geese—breeds, sexes, ages, sizes. Their alliances within a flock, their bouts of aggression and spells of passivity, their concentration, the way they stand their ground against dogs or humans—these are all wonders.