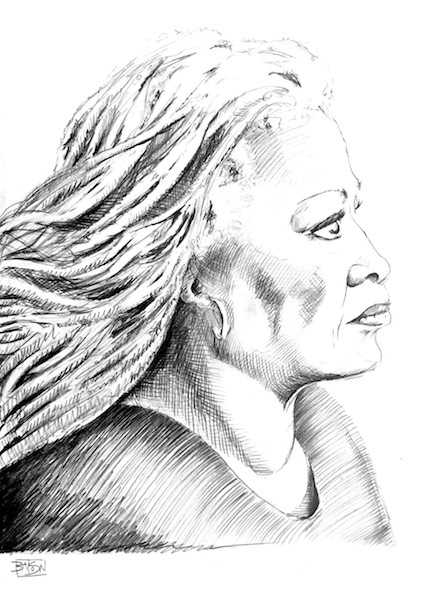 The Pieces I Am 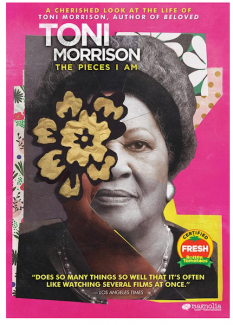 Join Rivertown Film in remembering Toni Morrison, pre-eminent novelist, winner of the Nobel Prize in Literature, recipient of the Presidential Medal of Freedom, and a longtime local resident. Made before she died, the film includes extensive interviews with her, and as in her writing, she leads viewers through an exploration of race, America, history, and what it means to be human.

There will be a post-screening discussion moderated by Bill Batson with Dr. Craig Stutman, Joshua Leach, and Dr. Tracyann Williams, chair and members (respectively) of the Toni Morrison Society’s Bench By the Road Project. Community Partners of this screening include Nyack Library, Nyack NAACP, Nyack Center, and Nyack Sketch Log.

Tickets are $8/Rivertown Film Members, Seniors and Students, and $12/Non-Members. Members of the Nyack NAACP will receive the Rivertown Film member discount on tickets. Tickets can be purchased online at rivertownfilm.org and at www.brownpapertickets, or by calling (800) 838-3006, or at the door.

Purchasing tickets in advance is recommended for this event.

Rivertown Film to Pay Tribute to Toni Morrison with a screening of “The Pieces I Am”; Members of Toni Morrison Society to Speak After the Film on the Author’s Legacy — Locally and Beyond

Few deaths of writers result in the ordering of flags to be flown at half-staff, but the passing of Toni Morrison this summer at the age of 88 led to many such ordinances. Rockland County joined in honoring her impact on the national imagination. Writers and readers memorialized her in countless ways, and continue to, writing essays on the impact of Morrison on their life, giving speeches at the Cathedral of St. John the Divine in Manhattan, or perhaps privately going about their day remembering a favorite line, taking one of her many novels off of their shelves. Perhaps they even wrote a piece of fiction in her honor.

“Toni Morrison: The Pieces I Am” will be screened just around the corner from Memorial Park where the author dedicated a bench to the memory of Cynthia Hesdra, a conductor on the Underground Railroad who became a business woman, in 2015 through the Morrison Society’s Bench by the Road project. Bill Batson, Chair, Nyack Commemoration Committee, said of the event:

When Toni Morrison came to Nyack on May 15, 2015 to dedicate one of her bench by the road monuments, she needed assistance to get in and out of a vehicle and had to use a cart to travel to the site from where she spoke in Memorial Park. The strenuous effort that she made to travel here, even though her home was a little more than a mile away, spoke volumes of how much this community meant to her. When she beheld the procession of over 400 students and adults, led by a marching band and choir entering the park to find her seated on a bench for a reading, she could see that the affection was mutual. If you find anyone of the people who attended that ceremony, they will all tell you it was one of the most memorable occasions of their lives.

Because of her bibliography of books and essays, the films and interviews, one of which launched the Bench project, there are numerous places where minds can travel to find Toni Morrison. But now, in 25 cities around the world, there are physical places to visit, that evoke her depiction of her persevering race and gender, burnished as much as burdened by the diaspora. We hope to add more signage to the bench and Nyack and are excited that the Nyack library is embarking on a year of programming in her honor called Black American Culture & Art Series: The Legacy of Toni Morrison. that included the December 11 screening of The Pieces I Am and goes through October 2020. We hope that as people continue to read her work, they will also make pilgrimages to her benches, and learn about the history that she sought to preserve from obscurity. 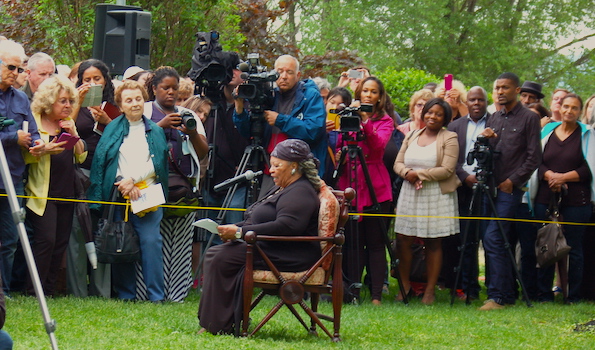 The Bench by the Road initiative gets its name from an interview the author did on her book Beloved: “There is no place you or I can go, to think about or not think about, to summon the presences of, or recollect the absences of slaves…And because such a place doesn’t exist…the book had to.” Morrison trusted Rivertown Film board member, the late Jonathan Demme, to adapt the novel into a film starring Oprah Winfrey, who makes an appearance in the documentary. It seems only right to show the film in the same building where a screening was held recently in the director’s honor. 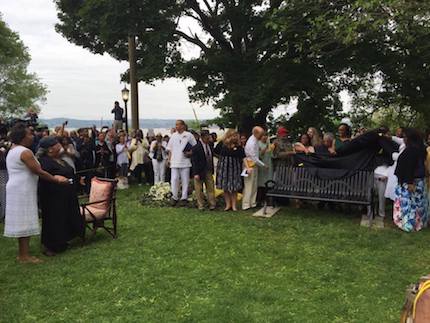 The documentary takes us with Toni Morrison as she moves through her college years at Howard where she was known to perform in theater productions and bake carrot cakes to the job that would turn into her career as the first black female senior fiction editor at Penguin Random House. Morrison didn’t seem to settle for second rate treatment along the way, laughing at segregated bathrooms she encountered in public and speaking simply and sternly for herself when she found out she was not paid as much as a male colleague. They gave her the money. 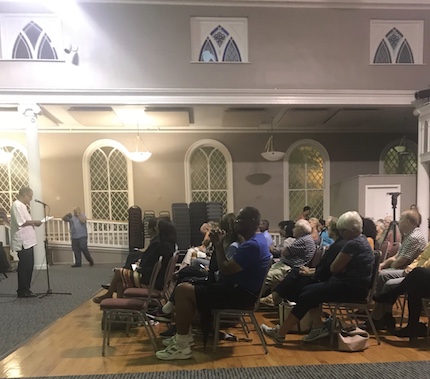 Beyond my mother gifting me Toni Morrison novels during my teenage years, and studying her work in graduate school, I felt more of a parasocial relationship to the authorial image of Morrison than I do with many other writers. Partially this was because we lived within miles of each other and my mother would occasionally wave at her house as we drove along River Road to visit my grandmother in Tappan. She also remains mythic because I’ve been told by those who knew her that she called my father, Henry H. Roth, another Nyack writer who passed away when I was quite young, her first real writer friend. She’d even offered to edit his collection of short stories into a novel, but he was stubborn for them to remain intact. The collection was later adapted by a local filmmaker, Kathleen Collins, into a film that was shot in town. Growing up, when I thought of Toni Morrison, I thought too of her personal kindnesses, 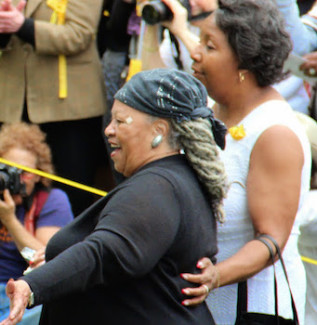 that she’d cared for my father, and as I’ve read and listen to the bounty of writers who’ve come forward with their own testaments to her fierce generosity and mentorship, I understand how often she encouraged her peers and used her editorial influence to bring new voices into print.

But in watching the film, it’s clear Toni Morrison grew into herself alongside her literary community. As she gave a platform to other writers, she came to call herself one. Morrison edited the books of some of the most revolutionary voices in literature from Toni Cade Bambara to Angela Davis to Gayl Jones, some of whom appear in the film alongside interviews with Morrison. Along with the cast of public figures who speak on the author’s life, the Hudson River emerges as a major character. She tells the viewer of how she first sat alone out on her dock, looking down on the water after leaving Penguin. It was her first experience of true happiness, the moment she decided to dedicate her life to writing. 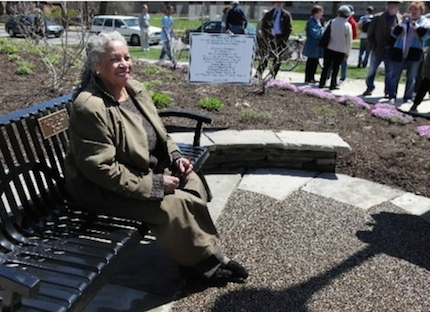 Morrison seated on her Oberlin Bench by the Road

There will be a post-screening discussion moderated by Bill Batson with Dr. Craig Stutman, Joshua Leach, and Dr. Tracyann Williams, chair and members (respectively) of the Toni Morrison Society’s Bench By the Road Project. Community Partners of this screening include Nyack Library, Nyack NAACP, Nyack Center, and Nyack Sketch Log. The program begins at 8pm at the Nyack Center. Doors open at 7:30pm. Tickets are $8/Rivertown Film Members, Seniors and Students, and $12/Non-Members. Members of the Nyack NAACP will receive the Rivertown Film member discount on tickets. Tickets can be purchased online at rivertownfilm.org and at www.brownpapertickets, or by calling (800) 838-3006, or at the door.

Rivertown Film is a non-profit organization, which was founded in 2001, and is made possible by the New York State Council on the Arts with the support of Governor Andrew Cuomo and the New York State Legislature, Orange and Rockland, and in-kind Media Sponsor “Nyack News & Views.” Their mission is dedicated to celebrating, exploring, and promoting the art of the motion picture. Their Creative Advisory Board includes such industry professionals as Ellen Burstyn and Bill Irwin.

Purchasing tickets in advance is recommended for this event.

It’s Bench by the Road Day in Nyack