Christmas 1919 was a unique and fun experience in Nyack when one of Nyack’s most memorable Hudson River buildings was turned into an English castle. Instead of carols around a Christmas tree, villagers saw puppets, gonfalons, mummers, trumpets, dairymaids, heralds, foresters, puppets, burning yule logs, and a roasted boar’s head caper across a decorated stage.

All of this and more made the holiday season even jollier at the scenic Tappan Zee Hotel when some 250 villagers from the Nyack Club worked together to produce an original drama with holiday songs. The Inn was packed for the single performance. The one-scene, one-act Southumberland’s Yuletide was set 250 years ago and written by Nyack’s own Captain Coan. 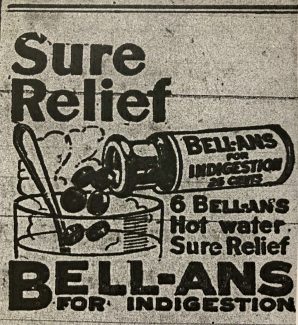 Not much else was scheduled for the holidays in Nyack. The Broadway and Lyceum Theaters had daily silent movies with vaudeville acts. The Bank of Nyack had a successful 1919 and awarded employees a Christmas bonus (30% of a half-year’s salary). Real estate agency Blauvelt & Morrell reported brisk sales over the last part of the year. The Ivanhoe and St. George Hotel offered their holiday dinners in the afternoon. For those who overindulged, the Orangetown-manufactured indigestion pills from Bell-Ans, as advertised in the Nyack Evening Journal, were readily available. Mistletoe, fresh nuts and fruit baskets were available at the popular grocery, Traversons at 76 S. Broadway.

The Nyack Club was formed in 1917, when the Nyack Arts Club merged with the Nyack Country Club. This was just at the time the Nyack Country Club, with a 9-hole golf course, national tennis events, and a clubhouse on N. Broadway, was closing. The newly formed club purchased the Tappan Zee Hotel from the Lexow family in 1917. The club held dramatic events, art shows, craft shows, summer music recitals, and concerts with Met opera stars. The Nyack Club auditorium was used for political speeches, fundraisers for the Nyack Hospital, and other causes.

1876 etching of the Tappan Zee Hotel. Courtesy of the Nyack Library.

The Nyack Club was the last of a number of groups who used the four-story building with an elm-lined 100-foot entranceway on the Hudson River at the foot of Mansfield and Glen Byron streets. Built in 1859, it was first the home of The Female Institute, an early women’s college. When the school closed, it became an Inn, then the Rockland Military Academy. Its penultimate incarnation was as the Tappan Zee Hotel, a summer resort with a beach, tennis courts, and rooms for 175 guests. The Nyack Club was the last organization in the building; after the club’s demise in the late 1920s, the building was abandoned and in 1932 it burned down, ending a 70-year history as one of Nyack’s most famous buildings.

South Nyack resident Captain C. Arthur Coan, a lawyer, author, and military officer, commanded the 9th Infantry, New York Volunteers in the Spanish-American War. His war service brought about partial deafness, so in the World War (at the time the WWII hadn’t happened yet) he took charge of rifle ranges in southern camps.

He was a world traveler, archeologist, Egyptologist, and member of the Japan Society. He published a number of books with G.P. Putnam & Sons and several theosophical works with local resident, Samuel Colman. His world travels and authorship made him uniquely qualified to write the masque. His wife, Francis C. Challenor, was a renowned local painter and may have helped with the set.

Coan’s masque called for 26 speaking parts and 13 non-speaking groups, such as lace makers, huntsmen, and dairy maids, each with a group leader. The old castle set was produced by a local team. An arch was built to define the candlelit space. The auditorium’s stage was used as a dais for royalty. A 10-foot fireplace was placed center stage.

Coan interwove traditional Christmas carols with a series of skits and pageants. Several plays-within-a-play were performed, including two puppet shows, a mummer’s parade, a feast with an actual boar’s head, and a love story. Various groups appeared in the castle with the Duke and Duchess and their court, along with the Lord of Misrule seated on a throne. Comedy was supplied by mice in a corn crib who sang “Three Blind Mice,” a mischievous court assistant, and the second of two puppet shows.

The show was capped with the lighting of the yule log from the yule log of the previous Christmas. At the end of the play, a tableau of the cast sang “Come Hither Ye Faithful “and then marched out of the auditorium to the tune of the “The British Grenadier.”

Humorous Nyack Christmas card from this era. Courtesy of the Historical Society of the Nyacks, the Courtwright Collection.

The masque was performed on Tuesday, and Christmas Day followed on Thursday. The Nyack Evening Journal labeled it a huge success. Romance, laughter, and singing from the 250 villagers, combined with an audience ready to harken back to an earlier time, made for an unforgettable frolic as the village was poised for the madcap 1920s.

Nyack People & Places, a weekly series that features photos and profiles of citizens and scenes near Nyack, NY, is brought to you by HRHCare and Weld Realty.
In this article:Nyack, Nyack Country Club, Nyack History, Nyack Military Academy, tappan zee hotel, tappan zee inn, The Female Institute, the Nyack Club