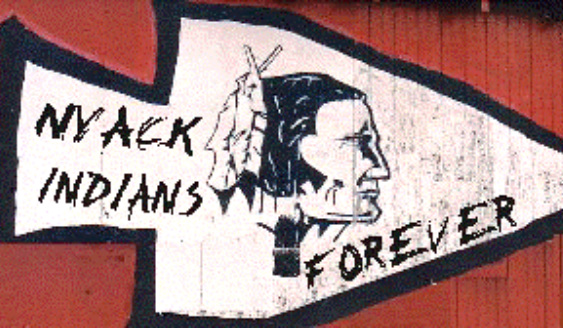 Moving back to Nyack after attending college out of state, in some ways I feel like I’m viewing it with fresh eyes. No longer a jaded teen, I’ve realized how much I missed the close-knit community that once felt smothering. I have a newfound appreciation for how easy it is to get a good bagel. Watching the leaves fade from green to red to yellow to brown for the first time in four years—instead of just disintegrating off trees, somehow immediately dead at the end of September—was gratifying. These revelations have been overwhelmingly positive, but I falter when I look through my old yearbooks. The pages dedicated to Homecoming Weekend show smiling, enthusiastic students at the annual football game, several wearing Native American headdresses. The Nyack Indians now inspire less pride in me than cringing.

Across the country, institutions have been slowly but steadily taking action against the use of Native American mascots. In addition to some of these mascots being blatantly offensive (like the Washington Redskins), studies have shown that they perpetuate harmful stereotypes, undermine the ability of indigenous people to portray their culture respectfully and accurately, and carry on a historical legacy of oppression. The National Congress of American Indians celebrates that over the past 35 years “over 2,000 ‘Indian’ references in sports have been eliminated.” However, they report that “nearly 1,000 still remain today.” Like our Nyack Indians.

Though the issue hasn’t been formally raised for nearly 20 years, Nyack was once the site of a heated debate about its controversial mascot. During the early 2000s, Nyack was among a few Hudson Valley schools exploring the removal of Native American-related team mascots. The proposed change met vehement opposition from the outset, primarily from people who Dr. James Montesano, Nyack Schools Superintendent, refers to as Nyack “traditionalists.” The debacle predated Dr. Montesano’s arrival to the district, but he says that members of the previous administration emphasized “how stressful and emotional it was for the entire community to wrestle with this.”

He says that ultimately, after wrestling with the issue in both private and pubic forums, the Board decided to remove the visual component of the Nyack Indians mascot and maintain the name. Now, team jerseys simply read “Indians” with no associated symbols.

Some would argue this compromise does not go far enough. Separate from the mascot debate, there has also been a linguistic debate about the proper language to use when referring to indigenous people. The Smithsonian’s National Museum of the American Indian asserts that the terms “American Indian,” “Indian,” “Native American,” and “Native” are all acceptable terms when referring to these groups, but the question of correct terminology has no definitive answer. However, the use of these monikers in the context of mascots is widely regarded as disrespectful—even if there are no images formally associated with them. (Some individuals dissent here too, but these cases are few and far between.)

An argument frequently invoked against these feelings of disrespect is that the mascots are intended to honor indigenous people. The Nyack Indian Foundation, which describes its mission as “preserving the image, tradition and heritage associated with the Nyack Indians in a way that will benefit the entire community,” seems to have been formed as a result of the early-2000s conflict. (No representative could be reached for comment, but the website states that the organization was founded in 2003 by “a group of concerned citizens,” and a page of the site is devoted to the school board’s mascot decision, detailing each member’s voting record.) It seems as though the Board’s compromise was viewed as an erasure of the community’s history. On the website’s “Nyack History” page, below an abbreviated, dated, and at times sanitized account of interactions between Dutch settlers and Native American tribes (“The Nyacks, together with all the other Staten Island savages, were compelled to seek fresh camping grounds west of the Hudson river.”), it reads, in all caps, “LET’S NOT FORGET THE REAL HISTORY OF NYACK.” The website also advertises that “in the spirit of the Nyack Indian, insignia wear and apparel displaying the Indian head logo are available for a small donation.”

I spoke with Steven Burton, tribal member and Commissioner of Indian Affairs of New Jersey representing the Ramapough Lenape Nation. He provided a different Nyack history. He described how the Munsee, Hackensack, Tappan, Ramapough, and Pompton tribes became blended in this region, partially because of lineal ties, partially by invitation from the Hackensack, and partially from being forced off their native lands across New England and southern New York. Their history is often misrepresented, as the Ramapough Lenape Nation website says, because “the written history of the native people in this area was always left to the non-native community to write, and with their ignorance of Lenape ways and language, their documentation was seldom accurate.” Their history, also, is not as far removed from the present day as having an honorific mascot implies. Burton says: “We reject the use of effigies as mascots because we are not dead. If the reason we were chosen was to honor us, please don’t. There is no honor in what was done to our people.”

Still, the Nyack Indians remain. Montesano views the community’s complacency with the issue as a result of an emotional attachment that trumps what it literally signifies. “My sense is that most people identify with that as ‘that’s our high school,’ and ‘that tradition that represents the many different classes that I’ve had through the schools there,’” he says. “I think they identify more with it in that context than looking at it for its true meaning, in terms of representing a certain group of people.”

New community members, however, are not as desensitized to the term. Montesano has observed that “when new families come into the district, and they hear all the work we’re doing with equity in the district, it seems somewhat incongruent to have a nickname like ‘the Indians.’” People have approached him about this directly. “They’ll raise that to me, like, ‘What’s going on with this? Isn’t that nickname not necessarily reflective of the good work that’s being done within the schools themselves?’”

It is especially “incongruent,” given that one of Montesano’s biggest crusades in the district is recognizing and reforming educational structures that disadvantage minority or low-income students. In a message published on the Nyack Schools website, Montesano says the essential question that drives his pursuit of a more equitable district is: “How do we work together to establish a culture that embraces diversity, respects all cultures, and ensures the development and implementation of educational programs that maximize academic achievement of all students regardless of race or socio-economics?” The changes he has striven for are tangible. Among other things, he has conducted public community forums on this topic, and there has been a concerted effort to make the Nyack schools curriculum less euro-centric. Students are even being taught that their mascot is culturally insensitive. Layla, a seventh grade student at Nyack Middle School, reports that in her social studies unit on Native Americans, her teacher played videos on this subject and encouraged students to think critically about the mascot.

But the issue remains dormant. Even with the concern of new community members, there has been no real effort to resuscitate the debate. Burton chalks up the community’s inaction to a continued lack of cultural understanding, saying most people “have never met an indigenous person so they think we don’t exist, or the only knowledge they have of us is what Hollywood makes is to be.” The perceived apathy toward accurate cultural depictions of indigenous people is daunting to groups trying to combat it, as is the tenacity of “traditionalists.” Montesano presumes that “if this district or this Board of Education decided to take this on as an issue, it would probably be equally as controversial as it was back in the early 2000s.”

So, for the time being, the name will remain, keeping the Nyack schools attached to their past while working to reform their legacy.

If you would like to learn more about the history of indigenous people in this area, click here.