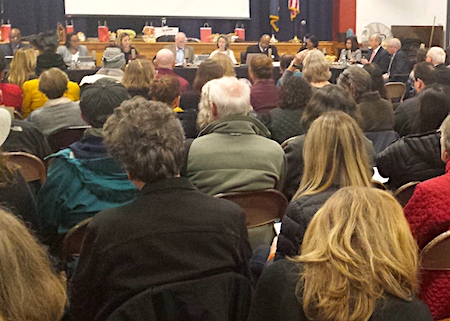 12/11/2019 Update: The Nyack School Board voted 5-1 on Tuesday night to approve a two year lease of the baseball field on Midland Ave as a temporary parking lot while Nyack Hospital completes work on a new parking garage across the street.

Nyack Hospital has asked Nyack Schools for a two year lease to build a temporary parking lot at the southwest corner of MacCalman Field, the former Nyack High School still owned by the school district. The parcel is currently being used part of the year as a little league baseball field. Nyack Hospital wants to put a parking lot which will hold up to 100 cars for visitors and patients while they build a permanent parking garage across the street on hospital property. 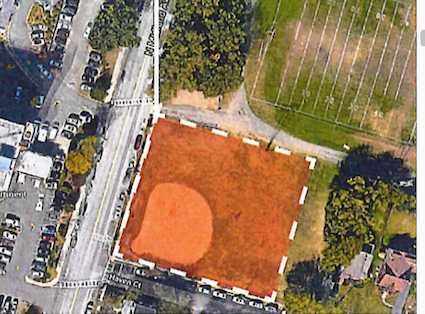 The baseball field at MacCalman field is at the corner of Midland and Haven Court, across the street from Nyack Hospital.

The lease agreement will run a minimum of 18 months and can be extended to two years if the hospital runs behind schedule building a new parking garage.  Nyack Schools will receive between $215,000 and $260,000 depending upon when the lease is terminated by Nyack Hospital. There’s a hard stop at 24 months to this arrangment, as stipulated in the contract: “Under no circumstances shall the initial term and any extended term of the License total more than two (2) years after the date the Hospital commenced use of the Licensed Area.”

To read a Q & A which covers frequently Asked Questions about the arrangement, visit NyackSchools.org. To read the contract and leasing agreement between Nyack Schools and Nyack Hospital, click here.

The Citizens to Save MacCalman Ballfield argue against leasing the ballfield to Nyack Hospital because it is used by the Nyack Valley Cottage Little League. Nyack resident Joe Rand thinks leasing the property can be a win-win-win for the neighborhood (which has frequently complained that hospital employees and visitors monopolize all of the on street parking); the hospital (which will be able to offer parking to patients and visitors during construction) and the school district (which may net as much as $260,000).

Nyack Schools has created a Q & A on their website to answer questions about this deal. Here are a few of those questions and their answers.

Q: Why does the hospital need to use this field for parking?

A: Representatives from Montefiore Nyack Hospital attended the public portion of the January 15, 2019 Board of Education meeting to request use of the field on the grounds of the Old High School for use as a temporary parking lot. Hospital representatives explained that parking in the vicinity of the facility has been a longstanding problem for residents, visitors and employees. In an effort to improve the street parking situation the Hospital would like to construct a state-of-the-art and environmentally viable new parking garage. The garage would be located solely on the Hospital campus and is planned to accommodate Hospital visitors, employees and others. During the time of the 12-18 month construction period, the Hospital requested use of the nearby field to set up a temporary parking lot for patient and visitor parking.

Q: What portion of the field is under consideration for use by the hospital?

A: The area proposed as a temporary parking lot is the smaller field on the grounds of the Old High School located at 131 North Midland Avenue. The area has a small softball field.

Q: What is the timeframe for use of the field for parking, should the Board of Education enter an agreement?

Q: I understand that Little League teams and other recreational activities take place in this area. What will happen if they are displaced during the period of construction?

A: A committee comprised of Board of Education members met with representatives of the Nyack/Valley Cottage Little League to discuss this issue. The Board of Education is permitting the Little League to make use of a newly installed ballfield behind Valley Cottage Elementary School. The walking track and MacCallman Field are not being impacted and would remain accessible.

Q: Will the field be restored back to a grass field?
A: At the end of the term of the agreement, the hospital would return area to the District in substantially the same condition it was prior to the agreement.

It’s a ballfield today. What will it be tomorrow? — cont’d

Sample plans of the parking lot were shown, with a valet booth, gates, fence, tree plantings, and nothing that seemed “temporary” although that word was used a lot. The presentation also included sample plans for a new ballfield. The proposed lease the BOE will consider on Dec. 10 says the ballfield would be restored to a field, not a ballfield. So we would lose the ballfield FOREVER!

No one talked about a state-of-the-art ballfield since that January meeting. Instead, residents became aware in September of a newly constructed ballfield at Valley Cottage Elementary. That’s also when Nyack Valley Cottage Little League learned about the field, and was asked to no longer play on MacCalman field. No wonder no one from the Little League feels they can speak up about this parking lot idea. Not only were they provided a field to remedy a situation that didn’t yet exist, they rely on the district to use district-owned fields.

We asked BOE president Michael Mark who paid for the Valley Cottage Elementary ballfield, if it was us, the taxpayers, and the question went unanswered.

Superintendent Dr. James Montesano also told teachers and staff at his Superintendent’s Day before school started in September that the new Valley Cottage Elementary ballfield was constructed to replace MacCalman, which will become a parking lot for Montefiore-Nyack Hospital. Several staff say this was presented as a “done deal.”

It’s important to note that no details about the proposal had been shared in an open setting since the January 2019 meeting until this week. Something that affects a large neighborhood and community had ZERO public input. The lack of transparency is astounding to residents who have been stymied when asking questions this year. 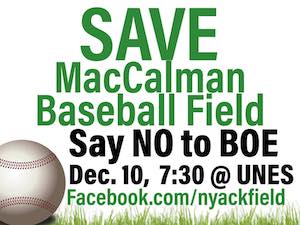 Lawn sign distributed by the Citizens to Save MacCalman Ballfield.

Citizens have been told “don’t worry about it” by BOE members and also “what’s the big deal?” and “what a sweet deal” from people who don’t live near the field (the agreement would give the district potentially several hundred thousand dollars). The BOE has not said what it will do with that money or what it will do when the income goes away in two years.

The details were made available publicly on Dec. 5, 2019, in the license agreement that will be heard on Tuesday. That’s almost a year from when Montefiore came to the BOE with the parking lot proposal. No public input was gathered during the process that is now a 34-page legal document between Montefiore-Nyack Hospital and the BOE.

The BOE has also not told us why we they are acting as agents for a corporation. What else is for “sale”? Maybe something you’ll care about even more?

Transparency IS a big deal. Taxpayer and community input is a big deal.

None of that happened.

It’s a ball field today. What will it be tomorrow?

Lack of transparency extends to the Montefiore as well, and to Dr. Geller who has on numerous occasions said the hospital wants to be “a good neighbor.” Dr. Geller promised residents he would have a community forum to discuss the ballfield plan. To date, no forum has ever been scheduled. Dr. Geller promised this forum in person, in media interviews, in emails as recently as October, and in a letter sent to some residents in September.

Montefiore is a multi-million dollar corporation that does not pay taxes due to its non-profit status. Even if the district contract is “iron clad” and stipulates hefty fines for going over a lease term of two years, Montefiore may consider it just the cost of doing business to pay the fine and continue to use the ballfield as a parking lot. Leadership changes, too. In two years, we may have newly elected BOE members and maybe even a new superintendent. Lawyers are deft at revising contracts!

It is important to note that Montefiore has not submitted a single plan to the Village of Nyack for the parking garage. The construction timeline is unclear. Concerns regarding traffic safety with another active driveway on North Midland and environmental impact of converting a ballfield to a parking lot haven’t even been explored.

Montefiore doubled-down this week, and instead of having a forum with residents to discuss the plan or concerns, its Public Relations department emailed hospital employees who are also residents of Nyack School District. The memo asks them to attend the BOE meeting, anticipating community opposition, and speak in support of the parking lot. This is an incredible ask and also not neighborly: pitting neighbor against neighbor.

One of the key points of the memo that asks hospital staff to argue for the parking lot is that it will benefit the “fragile patient population.” But this is a nonsensical argument. If you’ve ever taken a family member or friend to the hospital for treatment, you likely drop them at the door and then go find parking.

Nyack must not allow this to happen!

To look at a ballfield and consider it for a parking lot is crass and not at all neighborly.

A parking lot does not serve the students of the district or our community. It serves ONLY Montefiore.

Montefiore can find another way. No duration of time to use our ballfield for a parking lot is acceptable to our district families and our students.