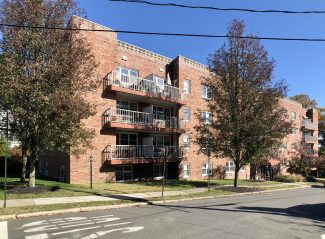 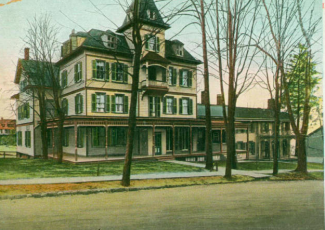 Colorized postcard of the Ivanhoe with its front facing 4th Avenue circa 1910. Courtesy of the Nyack Library

On a warm Saturday night in August 1893, 75 people gathered at the popular Victorian boarding house run by the Lydeckers on 4th Ave in Nyack to witness the formal naming of the house.

Ivanhoe, derived from the popular Sir Walter Scott novel (connoting chivalry and honor), was chosen. It has been said that three U.S. presidents stayed at the Ivanhoe at different times while attending the Baptist Church across the street. The Ivanhoe name has survived changing times and changing buildings. The 46-unit brick apartment, built during Nyack’s 1960s apartment boom that replaced the Victorian resort hotel, is called Ivanhoe in memory of the original.

Isaac S. and Elizabeth Lydecker opened a boarding house around 1890 in a large house facing 4th Ave in the irregularly spaced block bounded by Broadway and Ackerman Place. The 1890s were the heyday of Nyack summer hotels and the Lydecker boarding house proved to be very popular, as were the innkeepers.

Isaac was the son of James Lydecker, a wealthy West Nyack farmer. For a time, Isaac ran a milk business in Nyack. Both James and Isaac were known for raising some of the finest race horses in Rockland County. The Lydeckers expanded the original boarding house by connecting another building on the property in 1892 and adding a quaint winding stairway. The expansion initiated the naming party. 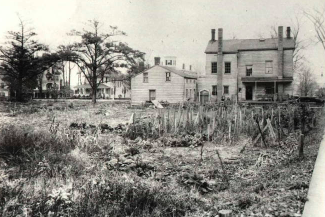 Nyack in 1895 was a very different village. This photo is taken from the backyard of the Defendorf house on the corner of 3rd and Broadway. At the far left is the Ivanhoe. The two other houses barely visible on the left still stand on Broadway.

Many of the Lydeckers’ guests returned summer after summer. Some commuted to New York City offices via the Northern Railroad or by the river steamer, Chrystenah. Lydecker would hitch up his surrey every morning and head out for supplies with Elizabeth. Raymond Ackerman said, “The grounds were kept in beautiful shape. It was a lovely place.”

Occasionally, visiting guests would be noted in the paper (“Mrs. J. W. Catchpole and children of New York City are at the Ivanhoe,” read a headline on August 6, 1903). Guests in the early days were people of substantial means looking to escape city summer heat. Days were spent sitting on the wide verandas on walks and drives around Nyack.

Isaac Lydecker died suddenly in February, 1895, at the age of 50. As reported in the New York Times, he was found dead after returning from Mount Moor (then the name for West Nyack) in his sleigh. While unhitching his horses at the Ivanhoe, he sent an employee inside for warm water to feed the horses. When the servant returned, Isaac was found unconscious on the ground. Elizabeth was to carry on running the Ivanhoe for many years after his death. 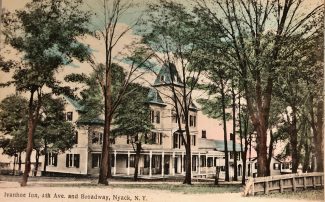 Ivanhoe postcard from around 1900

Fifty boarders and 25 guests assembled for the naming party on a summer night in 1893. Boarders and guests were asked to suggest names for the newly expanded hotel. A committee of three women were appointed to choose a name from the list. After only a few minutes of closed-door discussion, the women came back with the name “Ivanhoe.” The Rockland County Journal reported that “three hearty cheers were given for the house and its genial host and hostess.”

Entertainment followed. The Hayden Quartet played and Edgar and Harry Blauvelt, both Nyack residents, sang solos. After music, refreshments were “liberally dispersed” on the lawn, which was decorated with Japanese lanterns.

The boarding house and the dancing school

After the summer resort business declined in Nyack, the Ivanhoe became a traditional boarding house serving meals and renting rooms. From its earliest days, the Ivanhoe was home to dancing schools. In 1896, Miss Gillespie held a masquerade party at the Ivanhoe for her class. Dances were performed accompanied by piano. Supper was served at midnight and the party broke up at 1:30a.

After World War I, the hotel was advertised as being under new management with large, airy rooms, excellent cuisine, and special Sunday dinners. Transient accommodations were available.

About the same time, Miss Violet C. Green conducted modern ballroom dancing classes and private lessons at the Ivanhoe. She too held parties as the closing exercise of her dancing classes. In 1928, the tango was performed by two of her students along with little Isabelle Schiffer who, in costume, performed “The Blue, Blue Blues” and the “Varsity Drag.” Violet Green (nee Mrs. Norman Jeroloman) was one of the last tenants of the old Ivanhoe. 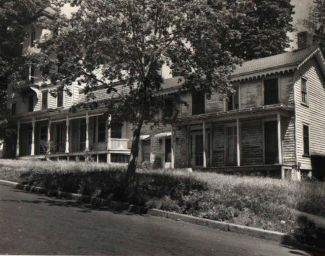 The Ivanhoe in 1962 just before it was demolished. View is looking north west on 4th Avenue

After WWII, the Ivanhoe was in full decline and sometimes used the name Ivanhoe Inn. Furnished rooms for housekeeping with kitchen privileges were advertised in local papers. Many tenants were White Russians who were brought to this country as displaced persons by the Tolstoy Foundation and Farm in Valley Cottage.

A number of fires broke out at the Ivanhoe over the years that hastened the decline. For example, in 1940 a fire broke out in the top floor and attic. Five streams of water were turned on the blaze, causing some damage to the lower floors.

In 1962, the Nyack Planning Board was presented with a proposal by Samuel Eidelberg to replace the decaying boarding house with a new 45-unit apartment building. Each unit was to have its own air conditioning, built-in ovens, and ample parking. The proposal came at a time when apartment buildings with reasonable rental prices were in high demand in Nyack, not unlike the situation today. Warren Hills, off Mountainview Ave., was built with 190 units in 1959, and Haven Court added 21 units. Other proposals were being made for the Rivercrest and West Shore Towers along the Hudson River.

The Planning Board claimed to be “under pressure” from both sides and stated that its decision “will determine the character of the village for a long, long time.” Most, if not all, apartment buildings, including the Ivanhoe, were given a final ok. In August 1962, the old Ivanhoe was demolished and began its new life as a modern apartment building. The builder decided to retain the name and it remains today: the Ivanhoe. The Ivanhoe name is a fit bridge between two pivotal moments in Nyack history, the rise of the resort hotels in the late 1890s and the rise of multi-story apartment buildings in the 1960s.